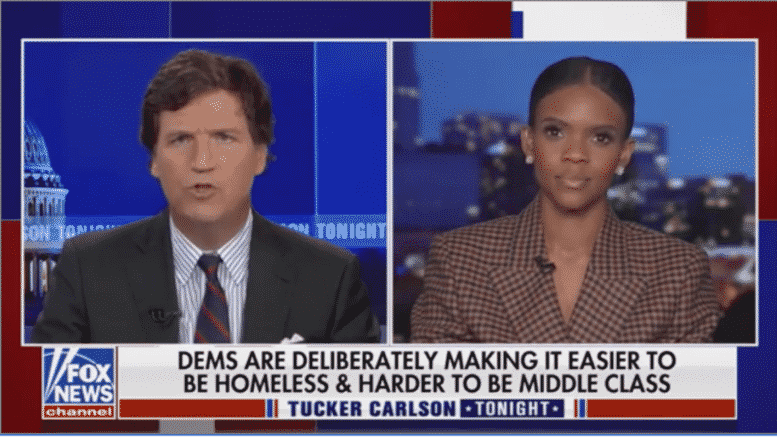 Please Share This Story!
PDF 📄
Technocracy News & Trends may finally be breaking through to media giants as Candace Owens lays it out to Tucker Carlson on FoxNews: “They really do want a global Technocracy.” This hits the ears of millions of Americans who have never heard the word “Technocracy” before but now they have a vivid picture of what it will look like if not rejected now. ⁃ TN Editor

CANDACE OWENS: There is so much I want to say here. You’re talking NGOs, and I can’t say enough: You have to look into what’s really going and you have to understand that yes this was a manufactured, yes it was a plot.

Do not allow people to look at you and issue pejoratives and call you a conspiracy theorist. You can look this up yourself.

Look at the World Economic Forum. The person who heads it up is a person named Klaus Schwab. Schwab released a book in 2020 talking about how the pandemic represented an opportunity for them to transform the world, for them to abolish private property.

Look at everything they are doing and you understand this is exactly what they’re after. The eviction moratorium basically saying you have to allow people who are effectively homeless live in your home. You’re making no money. How are they going to be able to pay back their mortgages? They’re not going to. They’re going to default.

People will be scooping up their properties, that were once owned by people in the hard-working American middle-class. Citizens that were maintaining their lifestyles before the government forced shut this down.

You’re looking at a government that wants a system of dependence. I look at the situation and I say what we’re seeing is modernized system of slavery. This is slavery in 2022 and they are proliferating this under the guise of Covid 19…

There’s been such federal overreach. In America, the one guard we have against this is state rights. Thank god for the governors standing up and saying absolutely not, no matter how hard the Biden administration tries to overreach, and say… more money and more money.

I always say Black America was the experiment with this, they issued trillions of dollars in welfare and they are seeking more today than they were before the welfare began. They’re now making that system for everybody. They want every single American dependent on the government. For food, for family, for drugs, whatever it is, they want a system of slavery, people need to look it up.

They want global technocracy. You’re not a conspiracy theorist. Do not allow them to gaslight you. Something very sinister is going on. There is a reason this is going on, and it is not just America, it is all across the world.

She hit the ‘ball’ so hard it may never come down!

And this is why they are building so many multi-family housing units here in L.A. urbanization

I have known this information for 2 years. Catherine Austin Fitts spelled it out to the T. Unfortunately the public is functionally retarded and is only starting to get an inkling of what lay ahead. Hint: Economic collapse, Mass civil unrest, mass poverty and wallah! NWO.

who is top responsible? WHOLE PICTURE REALITY IN 1 MINUTE IS: Most politicians are corrupt or hold hostages in restraints for to keep the following explained system continue:…Include government rate payments and you understand that you already pay more than 100% of your income to rate payments….that force to create price bubbles….In a real democratic country, taxes are against the law, though not needed…check that up and you understand that taxes are invented just for the reason that private central bankers can put rate on there “out of thin air made loans” to governments. Present turn over in this system… Read more »

Good points brought up by Candice. I don’t mean to burst anyone’s bubble. However, I’ve been hearing a lot lately about controlled opposition that have been creeping into alternative news and medicine in recent years. Not saying that Candice is controlled opposition. Just acknowledging that some folks are, and are not deserving of anyone’s trust. In other words. One can still accept the truth spoken by some people, without getting wrapped up in the controlled opposition messengers. I do have an idea of who some of them are.