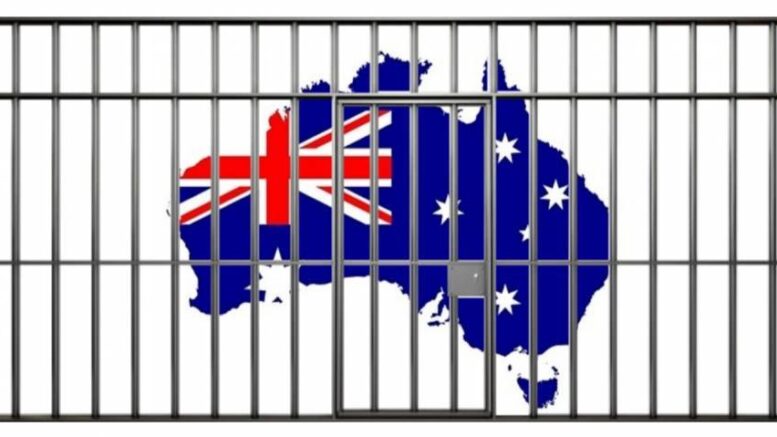 Please Share This Story!
PDF 📄
Shades of Nazi Germany’s police state are rapidly descending on Australia and there is no end in sight. Government actions are far beyond any relation to health emergencies, and thus far the citizens of Australia have proven impotent to put a halt to the madness. ⁃ TN Editor

As if the dystopian hell Australians are dealing with wasn’t bad enough already, residents of the country’s 2nd largest state are now at risk of losing the money in their bank accounts, their homes or other property, and even their driving privileges, if they do not pay their fines from breaking any of the tyrannical government’s draconian Covid rules in a timely manner.

Since at least September, Queensland Health has employed the services of the State’s Penalties Enforcement Register (SPER) to collect a total of 3046 unpaid fines totaling around $5.2 million, which includes 2755 separate individuals and businesses who were issued citations for not following the public health dictatorship’s unjustifiable orders during Covid lockdowns.

This is What Tyranny Looks Like: Absolute Mayhem in Australia; Covid-Police Ambush Crowds and Shoot Protesters In the Back With ‘Non-lethals’ As They Run Away – (Video)

The extreme measures are expected to be implemented in other areas of the country, which could bring in close to $100 million in total. In just New South Wales alone, there are over 56 million in unpaid Covid fines that would be subject to collection, according to 9News Australia.

Keep in mind, throughout the lengthy lockdowns, a huge number of citizens were not permitted to work or make a living in any way. Residents of Queensland could not even leave the house without being harassed by police or military officials, and if they dared stray too far from their house they were issued a ticket and a fine.

According to the latest data from Queensland Health, 18.4% of all fines are outstanding and would be subject to the extreme recovery options laid out above. Another 25% are also under investigation or pending and could potentially be sent into collections.

Just 56.4 percent of fines have been paid in full or are currently on a payment plan.

From the Brisbane Times:

SPER was undertaking “active enforcement” on another 18.4 percent of fines, worth about $1 million, which a spokesman said “may include garnishing bank accounts or wages, registering charges over property, or suspending driver licences.”

The unpaid fines are not the only big-ticket that Queensland’s public health dictators are looking to cash in on. They are also looking to chase down 5.7 million in “significantly overdue invoices” from the government’s mandatory quarantine facilities.

Unbelievably, Not only are Australian travelers forced into mandatory quarantine centers for 2 weeks upon arrival, but they are also sent a bill for their stay totaling a few thousand dollars.

The prime minister of Australia Scott Morrison is a Pentecostal and attends the Horizon Church an Assemblies of God Church, and here is a quote from him, “in April 2021 that he believes he was elected to do God’s work. (wiki).” This is the country that Hillsong Church originated and it’s huge, it has infiltrated America on most ‘Christian’ radio stations and churches. Prime Minister Scott Morrison is connected to Hillsong: https://www.crikey.com.au/2021/09/03/scott-morrison-lord-god-prime-minister/ Why is this important? Why would a the wicked leader of Australia do what he is doing while claiming to be a Christian? Because this is a cult!… Read more »

Been listening to David Knight. He makes the same excellent points about Trump that you do.

You know, free nations have gone to war to protect other nations from overthrow by dictators – when it suited their economic interests. It was ostensibly done to prevent a domino effect of the nations neighboring it from being overthrown in succession until a block of nations comes under the rule of a dictator – of whatever stripe.

And yet, I see absolutely no effort to protect Australia.

What is happening there is INSANE!

The citizens there need to shut down that entire country as it is the only way to stop this. Make the oppressors suffer too.

In Aust most of us don’t have to wear masks most places. Aust that have had the vac don’t have any quarantine when returning internationally. It’s not like some media portrays. The USA is moving much further left with it’s govt than Aust.

And those who don’t take the “vacs”? Second-class citizens much? The self-deception is astounding. If you want a Nanny state, disarmed, communist dictatorship on your little island, have at it! Not happening in the FREE WORLD.

No second class citizens in Aust. America is the land of the class system. You also have a left wing government that’s moving you further left. Aust is much further right than the USA. Your biden/harris govt is taking you down that road. Don’t they also support BLM, woke and cancel culture? Yes they do.

Put FACTS to your comments via LINKS from real people, not the compromised media and government. Facts that can be vetted and believed WITH video. To date, NO information coming from your country supports your comment here. I especially loved this part of the statement: “…most of us don’t have to wear masks most places. Aust that have had the vac don’t have any quarantine when returning internationally.” Clearly, you have NO idea what freedom really is. You prefer compliance. “Most of us, most of us, most of us” is still ringing in my ears. You support/supported a class system… Read more »

You are wrong. You get all your facts from some social media showing you the worst, not the normal. Do you want us to judge the USA from the worst videos we see? It’s a lot worst than Aust. Apart from covid videos, It’s the home of woke, cancel culture and BLM. Should we judge all the US based on this? Do you think anyone can go to most countries without being vaccinated or quarantining? No. To the USA “all non-immigrant, non-citizen air travelers to the United States will be required to be fully vaccinated”. Most, as in most states,… Read more »

Never have I used ‘social media’ of any type, EVER. So, WRONG. I get my information from your news or what suffices as Aussie news these days. The Narrative is running in all sovereign States–it’s planetary. Only small variations exist based on cultural bias–the main points of a totalitarian narrative never change. A little history maybe? Do you think the FakeSM tells you a different story than it tells Americans, Italians, British? NO. Wake up and not WOKE, you stupid little boy. The Woke concept you note or whatever suffices as news bout the USA for Aussies is part of… Read more »

I already replied once but it wasn’t allowed or blocked. This one wont be as long. You have it all backwards. You get all your info from social media. Only the worst not the normal. The USA home of the woke, BLM and cancel culture. Do you want every one to judge the US from what is shown on the social media? No. That’s what you’re doing. You have a government far left with biden/harris compared to Aust which is considered right. Aust has an incredibly lower death rate/million from covid than the US. You also have distinct class system… Read more »

Paul, how much do you get paid to post your propaganda here and other places? If you feel the need to keep bragging about AUSTRALIA how Scott Murderson’s Zero COVID (Certificate of Vaccination Identification) lockdown HOUSE ARREST of millions of people kept your flubbed statistics at not actually zero, go ahead. Everyone knows Xiden is a Chinese puppet installed by the Deep State military industrial complex. Federal (feudal?) system in the FREE STATES of America will NEVER be controlled by Xiden and cronies. These states NEVER put their citizens under house arrest and resist the flying in of illegal criminals… Read more »

You know nothing about Australia. The PM Scott Morrison isn’t and hasn’t locked down anyone. Australia is a federation. It’s the individual states that decide on lockdowns. Most of Australia is not in lockdown anymore. Lockdown was short in most states. Only one state (the one you saw on social media) was locked down for a very long time. That state govt will be voted out next election. Maybe some of the restrictions were the reason Australia has a very low death rate compared to most countries, especially the USA. You also seem to know nothing about the USA. All… Read more »

It’s evident that both Australia and Canada have been selected to carry out a population test to determine how far rights restraints can be accepted by people. Both countries ar large in geographical size, carry a similar population in number and origin and both belong to the British empire.