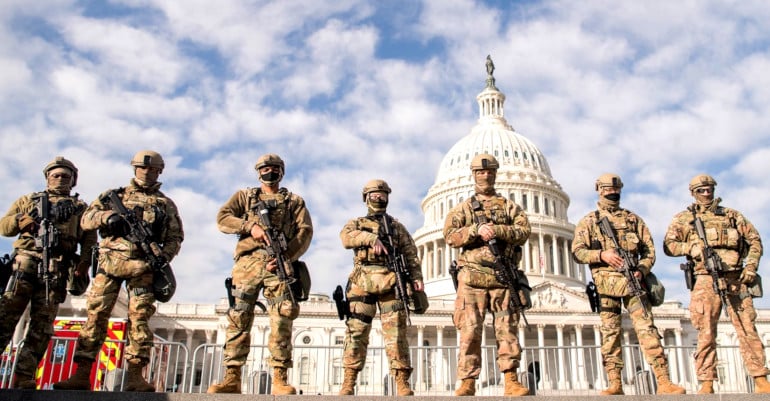 The Department of Homeland Security on Friday issued a new warning bulletin, alerting Americans that domestic extremists may well use violence on the 100th Anniversary of the Tulsa race massacre. This was at least the fourth such bulletin issued this year by Homeland Security (DHS) warning of the same danger and, thus far, none of the fears it is trying to instill into the American population has materialized.

The first was a January 14 warning, from numerous federal agencies including DHS, about violence in Washington, DC and all fifty state capitols that was likely to explode in protest of Inauguration Day (a threat which did not materialize). Then came a January 27 bulletin warning of “a heightened threat environment across the United States that is likely to persist over the coming weeks” from “ideologically-motivated violent extremists with objections to the exercise of governmental authority” (that warning also was not realized). Then there was a May 14 bulletin warning of right-wing violence “to attack higher-capacity targets,” exacerbated by the lifting of COVID lockdowns (which also never happened). And now we are treated to this new DHS warning about domestic extremists preparing violent attacks over Tulsa (it remains to be seen if a DHS fear is finally realized).

Just like the first War on Terror, these threats are issued with virtually no specificity. They are just generalized warnings designed to put people in fear about their fellow citizens and to justify aggressive deployment of military and law enforcement officers in Washington, D.C. and throughout the country. A CNN article which wildly hyped the latest danger bulletin about domestic extremists at Tulsa had to be edited with what the cable network, in an “update,” called “the additional information from the Department of Homeland Security that there is no specific or credible threats at this time.” And the supposed dangers from domestic extremists on Inauguration Day was such a flop that even The Washington Post — one of the outlets most vocal about lurking national security dangers in general and this one in particular — had to explicitly acknowledge the failure:

Thousands [of National Guard troops] had been deployed to capitals across the country late last week, ahead of a weekend in which potentially violent demonstrations were predicted by the FBI — but never materialized.

Once again on Wednesday, security officials’ worst fears weren’t borne out: In some states, it was close to business as usual. In others, demonstrations were small and peaceful, with only occasional tense moments.

Americans have seen this scam before. Throughout the first War on Terror, DHS, which was created in 2002, was frequently used to keep fear levels high and thus foster support for draconian government powers of spying, detention, and war. Even prior to the Department’s creation, its first Secretary, Tom Ridge, when he was still the White House’s Homeland Security Chief in early 2002, created an elaborate color-coded warning system to supply a constant alert to Americans about the evolving threat levels they faced from Islamic extremists.

In 2004, Ridge admitted that he had been repeatedly pressured by Bush officials to elevate the warnings and threat levels for political gain and to keep the population in fear. He claims that he, in particular, was coerced against his will to raise the threat level just prior to the 2004 presidential election and resigned for that reason shortly thereafter. DHS’s color scheme became “the brunt of endless jokes and derision,” concluded a 2007 scholarly study in the journal International Security, noting that it “became perceived as being politically motivated” largely due to the complete lack of specific information about what Americans were supposed to fear or avoid. Moreover, “its designers assumed that the population would trust in the national leadership and believe in the utility of the system’s information.” It failed because of how often the alleged threats failed to materialize, and because the warnings were rarely accompanied by any specificity that could permit action to be taken or avoided.

Though Obama scrapped the unpopular color-coded system in 2011, he — in a classic Obama gesture — merely replaced it with an equally vague and fear-generating bureaucratic alternative that was also subject to political manipulation. National security writers at Lawfare ultimately acknowledged that “like the [Bush/Ridge] system, there were no clear triggers for alerts [under Obama’s new scheme,] so the system remained objective and opaque.” As a result, they said, “the lack of specificity over time has resulted in similar levels of confusion as surrounded the [Bush/Ridge] color alerts.”

Fear is crucial for state authority. When the population is filled with it, they will acquiesce to virtually any power the government seeks to acquire in the name of keeping them safe. But when fear is lacking, citizens will crave liberty more than control, and that is when they question official claims and actions. When that starts to happen, when the public feels too secure, institutions of authority will reflexively find new ways to ensure they stay engulfed by fear and thus quiescent.

It brings to mind a popular meme making the rounds on Facebook etc. It goes something like this, though there are many variations. “So you wondered how the German people fell for Nazism. Well, now you know.” You actually published my article last year on my prediction (02/2020) that forced vaccinations were coming: https://www.technocracy.news/coronavirus-gives-boost-to-new-era-of-no-choice-no-voice/?fbclid=IwAR1a-dCtwjNWw9mT7aA4nNHiH7xI8-aqarhSa5EtZVfczKuqYVnHNFnc_9U Thousands of us Internet Journalists have been trying to play the role of Paul Revere: to warn the American People. We all feel like we’ve been boxing with a hologram. No matter how hard or often we punch the country continues on this downward spiral. It… Read more »

It may be frustrating as there is no real movement being seen in humanity at this point in time. It’s due to the deafening, non-stop propaganda continually blared by the MSM dogs of war to create constant fear and ultimate control. However, that does not mean humanity isn’t watching, listening and waiting for that moment. And, there will be that ‘moment’ when the worm turns, when something great and liberating happens. When it arrives you and the other independent journalists, who have been working so hard to dig out and tell the truth, will have the knowledge that your contribution… Read more »