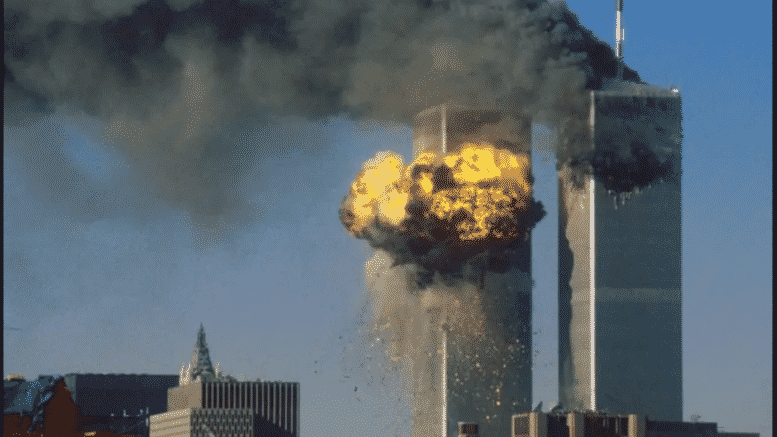 Please Share This Story!
PDF 📄
The careful and pre-planned scripting of Cyber Polygon can be seen playing out as recent cyberattacks are elevated to the status of the 9/11 terror attacks. This will lead to a war on cyber terror, requiring a new kind of Patriot Act to ratchet down police state policies and restrictions on Liberty. ⁃ TN Editor

FBI Director Christopher Wray said the agency is investigating about 100 different types of ransomware, many of which trace back to hackers in Russia, and compared the current spate of cyberattacks with the challenge posed by the Sept. 11, 2001, terrorist attacks.

“There are a lot of parallels, there’s a lot of importance, and a lot of focus by us on disruption and prevention,” Mr. Wray said in an interview on Thursday. “There’s a shared responsibility, not just across government agencies but across the private sector and even the average American.”

Mr. Wray’s comments—among his first publicly since two recent ransomware attacks gripped the U.S. meat and oil-and-gas industries—come as senior Biden administration officials have characterized ransomware as an urgent national-security threat and said they are looking at ways to disrupt the criminal ecosystem that supports the booming industry. Each of the 100 different malicious software variants are responsible for multiple ransomware attacks in the U.S., Mr. Wray said.

Ransomware is a type of malicious computer code that locks up a victim network’s files that hackers use to demand payment for their release, typically with digital currency like bitcoin.

This week, hackers held hostage the world’s largest meat processor, just weeks after the operator of an essential pipeline bringing gasoline to parts of the East Coast paid about $4.4 million to regain control of its operations and restore service.

Senior officials at the Federal Bureau of Investigation for years have likened the need to confront rising cyber threats to the post-9/11 scramble against international terrorism. But Mr. Wray said the wave of recent ransomware attacks has spotlighted the toll cyberattacks can have on all Americans.

“Now realizing it can affect them when they’re buying gas at the pump or buying a hamburger—I think there’s a growing awareness now of just how much we’re all in this fight together,” Mr. Wray said.

While the most prominent of the recent ransomware hacks disrupted gasoline deliveries and took meat-processing plants temporarily offline, they represent only a fraction of the some 100 types of ransomware the FBI is currently investigating, Mr. Wray said. “Those are just two,” he said, adding that each of those 100 different malicious software variants had affected between a dozen and 100 targets.

“The scale of this problem is one that I think the country has to come to terms with,” he said.

“… requiring a new kind of Patriot Act to ratchet down police state policies and restrictions on Liberty.” The “Patriot Act” was/wis not constitutional so it is unlawful in the USA. Guess this scum, FBI Director Christopher Wray, believes that he can break his Oath and his written duties without consequence because the American people are mostly “dumbed” down. No! The duties of our governments – state and federal, the reason they were created (by the written Constitutions) was/is to “PRESERVE the Blessings of Liberty to ourselves and our Posterity.” How far from their written directives and delegated authority are… Read more »

Romans 13, born again Christians are reminded that our laws came from God. Our constitution was based on the Bible, King James Bible. “LET every soul be subject unto the higher powers. For there is no power but of God: the powers that be are ordained of God. Whatsoever therefore resisteth the power, resisteth the ordinance of God: and they that resist shall receive to themselves damnation. For rulers are not a terror to good works, but to the evil. Wilt thou then not be afraid of the power? do that which is good, and thou shalt have praise of… Read more »