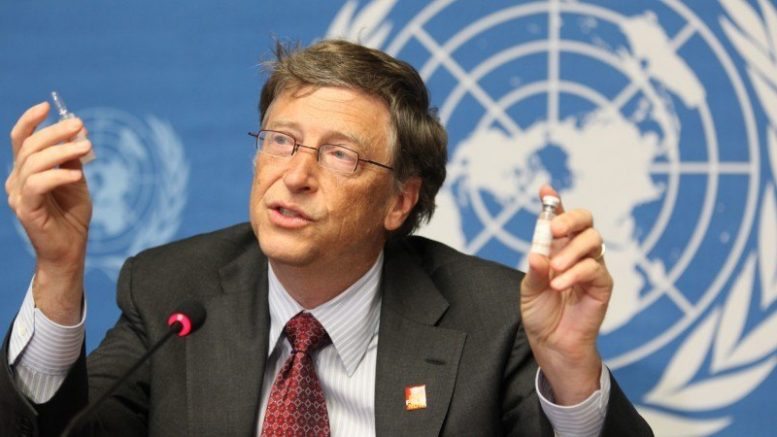 Trilateral Commission member Henry Kissinger created the modern master plan for population control in 1974 with the National Security Study Memorandum 200 (NSSM 200). Thus, Bill Gates and other moderns did not create the plan, but are only following its instructions. ⁃ TN Editor

Alleged humanitarian efforts have always been a rather important aspect of the state propaganda campaign carried out by the White House and its media. We’ve seen Washington using its proxy NGOs to fight against the alleged “humanitarian crimes” of the Syrian government, Russia, Iran, North Korea, Venezuela, Cuba and other states that Washington has declared its enemies.

This large-scale campaign that is said to be driven by “common human values” has been supported by a number of modern American oligarchs.

Among those “humanitarian champions” one may find the founder of Microsoft and one of the richest businessmen in the world, Bill Gates. He is a figure who likes to be presented as a benevolent philanthropist of sorts. By using the so-called “Bill and Melinda Gates Foundation,” this American oligarch attempts to put on the mask of the official representative of the US political elite, carrying on the fight against poverty, food shortages and diseases in Africa and other poor regions of the world.

However, in reality these “activities” of Bill Gates and the White House are focused on the use of progress to reverse the effect of humanitarian projects, namely to reduce the population of the planet, or, in other words – to pursue eugenics.

This statement is confirmed by Gates’ remarks to the invitation-only Long Beach, California TED2010 Conference, in a speech titled, “Innovating to Zero!” Along with the scientifically absurd proposition of reducing manmade CO2 emissions worldwide to zero by 2050, approximately four and a half minutes into the talk, Gates declares,

“First we got population. The world today has 6.8 billion people. That’s headed up to about 9 billion. Now if we do a really great job on new vaccines, health care, reproductive health services, we lower that by perhaps 10 or 15 percent.” (emphasis added).

Thus, one of the most powerful men in the world has openly declared that he expects vaccines to reduce the world population. Mind you, that when Bill Gates speaks about vaccines, he knows what he is talking about. In January 2010 at the World Economic Forum in Davos, Gates announced that over the next decade his foundation would allocate 10 billion dollars to develop and deliver new vaccines to developing countries.

We’ve heard this position regarding the control of the world population through the “reduction of the number of third-world inhabitants” before. Australian microbiologist and Nobel Price laureate Macfarlane Burnet in 1947 urged the Australian government to develop and unleash biological weapons against “over-populated countries of Southeast Asia.” In particular, during a closed meeting in 1947 with The New Weapons and Equipment Development Committee, the microbiologist recommended the creation of a group with a mandate to create secret biological weapon components that could affect food in such a way that it would allow Canberra to control the population of Indonesia and other Asian countries.

A similar objective was pursued by a secret program codenamed Project Coast, during which US intelligence agencies started testing such viruses as Ebola and Marburg fevers on South Africa’s black population. The US Centers for Disease Control was delivering those viruses from its secret laboratories to Africa in a bid to create biological and chemical weapons, which were aimed at sterilizing and even exterminating the black population of this African country, while at the same time, murdering political opponents of the apartheid.

Today, in the age of high-tech novelties, Bill Gates has pioneered the electronic direction of eugenics, offering to implant the “undesired” part of the population with an electronic chip that would deprive women of reproductive capacity for a total of 16 years.

However, this is hardly the whole truth about the “humanitarian concerns” of the White House and its “humanitarian patrons”, who, under the guise of fighting for the greater good, continue searching out ways to control the population of the planet, using both the advances of modern science and armed conflicts, like those that we’ve witnessed in Iraq, Afghanistan, Libya and other countries.