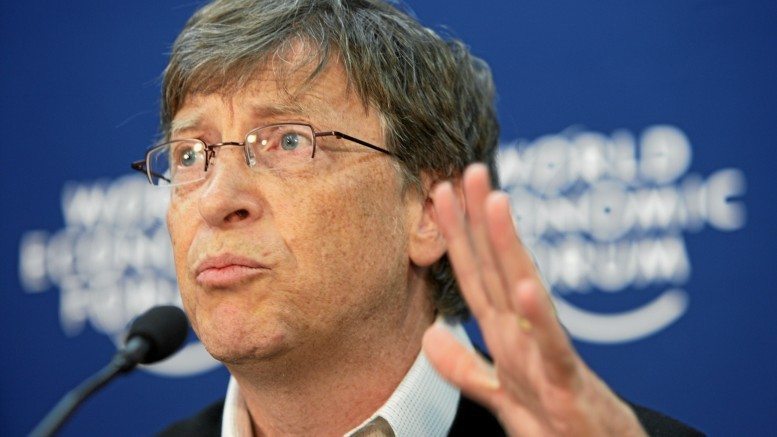 Please Share This Story!
PDF 📄
Bill Gates is the perfect model of a Technocrat mind, that is, absolutely clueless as to why most people would not embrace his Utopia view of the world. In his mind, there is only one answer to global problems, namely, his. ⁃ TN Editor

Microsoft co-founder turned philanthropist Bill Gates says he has been taken aback by the volume of “crazy” and “evil” conspiracy theories about him spreading on social media during the COVID-19 pandemic, but said on Wednesday he would like to explore what is behind them.

In an interview with Reuters, Gates said the millions of online posts and “crazy conspiracy theories” about him and about top U.S. infectious disease expert Anthony Fauci had likely taken hold in part because of the combination of a frightening viral pandemic and the rise of social media.

“Nobody would have predicted that I and Dr. Fauci would be so prominent in these really evil theories,” Gates said.

“I’m very surprised by that. I hope it goes away.”

Gates, a billionaire who stepped down as chairman of Microsoft Corp in 2014, has through his philanthropic Bill and Melinda Gates Foundation committed at least $1.75 billion to the global response to the COVID-19 pandemic. That includes support for some makers of vaccines, diagnostics and potential treatments.

Since the pandemic began a year ago, millions of conspiracies have spread over the Internet, fuelling misinformation about the coronavirus, its origins and the motives of those working to fight it.

They include claims that Fauci and Gates created the pandemic to try and control people, that they want to profit from the virus’ spread, and that they want to use vaccines to insert trackable microchips into people.

“But do people really believe that stuff?,” Gates asked.

“We’re really going to have to get educated about this over the next year and understand .. how does it change peoples’ behaviour and how should we have minimized this?”

Patrick Wood is a leading and critical expert on Sustainable Development, Green Economy, Agenda 21, 2030 Agenda and historic Technocracy. He is the author of Technocracy Rising: The Trojan Horse of Global Transformation (2015) and co-author of Trilaterals Over Washington, Volumes I and II (1978-1980) with the late Antony C. Sutton.
Subscribe
24 Comments
Oldest
Newest Most Voted
Inline Feedbacks
View all comments

He is the definition of a psychopath in psychology a science of atheism, for that is how they excuse sin. Biblically speaking he (she) is demon possessed. People are not always as they seem. Gates thinks he (she) is a god. Imagine the big liar whom Gates is who has been lied to by the father of lies who is evil one (Satan), but you can’t tell him (her) that.

REALLY???? HE’S A DISGUSTING SOT, NOT AN OUNCE OF CARE OR AWARENESS FOR NATURAL LIFE. HE THINKS THINKING IS SOURCE/CREATOR, AND IT IS NOT! I LOATHE HIS IGNORANCE.

Yes, his soul doesn’t really even know what care, love, concern for another human is. It’s not part of his “humanity.” People are “resources” to be used; he has no idea what “divinity,” or human caring really is. It’s not a part of him; he’s completely deficient. He is not part of the human species. No point in “blaming” him. It’s disgusting that so many have turned him into a god because he has money. That leads him astray, allows him to follow his own deluded being.

IS HE EVEN HUMAN? That’s an honest question, not a comment.

Seriously, I think he might be on the high-functioning autism spectrum. They do well with computers, programming. . . and get obsessional interests. With his money, he can indulge really expensive, grandiose obsessions. (e.g., Reducing world population; Vaccinating the world; Collecting arable farmland like it’s a hobby.) Many are certain he’s merely the front-man for others who are pushing Agenda 2030.

Bill Gates owns 500,000 shares of Monsanto which equals $23 million. Is global farming will be GMO food that has half of their vitality cut off because these plants cannot reproduce because they; Gates & Monsanto want the farmers to have to buy the seeds from them.. I thought they had enough money..?? also Gates is part owner of the corporation ‘Bauer’ who bought Monsanto because Monsanto is such a bad name across the globe. Many countries (approx10) have banned his products people need to know this

GATES has two entities – Bill and Melinda Gates Foundation and Bill and Melinda Gates Trust. The foundation invests and the trust holds investments. (I may have the names slightly wrong but just a concept. If you knew the holdings of their trust then his agenda would be clear. I saw that information on the internet once – it’s public.

I read recently that Bill Gates has been buying up farmland in the USA, and is now the country’s largest private land-holder. Why? well, he owns Monsanto and it is logical to assume he’s going to grow a lot of genetically-modified crops, which will in the normal course of events cross-pollinate his neighbouring farmers’ crops. . . . this man is evil on steroids. . . .

https://www.corbettreport.com/gates/ With so much information about Gates, his influence on vaccines and COVID, his statements that “we will never go back to normal until everyone is vaccinated” he’s ending up in the same position he ended with the U.S. SEC – the boy who got caught with his hand in the monopoly cookie jar only this time its world domination. It appears that Gates thinks he knows what’s best for the world – without debate. He takes agriculture in the exact opposite direction it should go moaning “technology” “innovation” etc. He takes world health in exactly the opposite direction it… Read more »

Science is not the opinion of 1 or 2 conflicted experts but rather the testing and thorough documentation of a hypothesis and test followed by a peer review, publication world wide, and then hundreds of scientists testing the data to prove it right or wrong and thereby reach consensus. Science is consensus not expert opinion. Science is reached through debate of the facts. Just like the declaration of independence was reach through much rigorous debate by many very smart people. If countries were listening to scientists world wide and their resultant consensus we would not have lockdowns, no masks, and… Read more »

This is actually a good news story, sinister and frightening though Gates’ megalomania may be.

Because when someone like this has such a poor understanding of human nature and human society (and basic economics too), he will certainly struggle to carry through his brutal, anti-life technocratic agenda.

He’s not trusted because he is a globalist, liar, and thief,

I don’t dislike Bill Gates anymore than any other psychopath I’ve met and I worked as a psychologist in a state mental forensic facility.

The difference between Gates and those you’ve worked with is that he has far more capacity to do harm that those you worked with. He is not institutionalised, and he has lots of money to implement his nefarious schemes. When he directly impacts the life of you, your family and your community, you may find that you dislike him a great deal more than you do now. 🙂

He is one of the repulsive being of our times. I feel like puking whenever I see his face. Horrible creature!

I feel like puking whenever I see his face. What a horrible and repulsive creature!