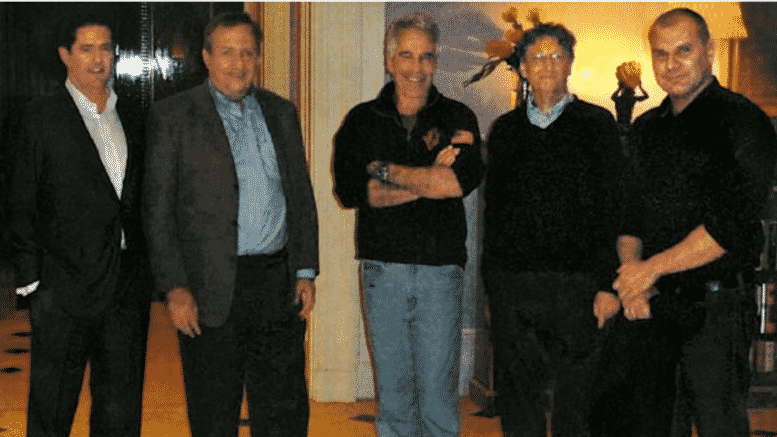 Posted By: Declan Leary via The American Conservative May 26, 2021

Please Share This Story!
PDF 📄
The carefully-crafted image of Bill Gates as benevolent geek, model husband and father, corporate philanthropist and all-around genius savior of the world – is shattered. His divorce is revealing that he is little more than a greedy reprobate philanderer who seeks to fill his own carnal lusts.

What better way to do that than taking over the whole world? Not only untold wealth accrues, but also 3.5 billion women. Well, his image is tarnished but he will not go away. His PR people are constantly spinning and re-generating his imaginary reputation. ⁃ TN Editor

In the latter years of the last millennium (as far as I can gather from the sitcoms) future president Donald Trump, while hardly cracking any global lists of notable net worths, was certainly the most famously rich person in the United States, if not in the world. He was the cultural referent, the ubiquitous synonym for “rich guy” in just about any situation. In a lot of ways, too, he did typify the upper classes of his time: gaudy, seedy, showy, somewhere on the border between old money and new—not to mention the border between two entirely different eras.

The ’90s Donald Trump of 2021—with Donald Trump himself transformed into something else entirely—is obviously Jeff Bezos. The times have changed, and so the cultural ubiquity is less about off-the-rack suits and Home Alone cameos and more about guillotines and lizard people. When we talk about the Rich Guy™️ now it’s as a soulless capitalist, an object of burning populist rage rather than lighthearted ridicule. Any given Rich Guy is a reflection of his moment, and every moment has one (at least since the name Rockefeller entered the public consciousness).

In between, when I was growing up, the role was filled by Bill Gates. It was the start of the new millennium, and the age of computers with it—computers as a dominant force in society, that is. The keys to the kingdom no longer belonged to the sons of rich men with monomaniacal devotion to (and keen talents for constructing) their personal brands; they belonged to the nerds. Every boy with a brain was told to stick to the books so he could grow up to be Bill Gates. In a moment when power relied not on brute force, nor on charm, nor any of the other traditional means of building social capital, but on cold, hard, left-brain acuity, Bill Gates was king.

And he loved it. This isn’t much of a secret. For a bespectacled programmer who is something less than an Adonis, the Microsoft founder has always harbored a remarkable love for the limelight and the cameras, relishing the public attention his cultural-economic status guaranteed. That may, in part, be why in 2008—13 years into his streak as richest man in the world—Gates left full-time work at Microsoft to devote his primary attention to philanthropy. Trips to Africa with lots of cameras make for great PR.

But there is also something more to Gates’s aggressive philanthropic efforts than just photo ops with brown kids. Unlike, say, a Bezos, who only dabbles in philanthropy when he absolutely has to (to keep the guillotines away), Gates has always seemed sincere. He has always displayed a genuine interest in his globe-spanning, world-shaping projects, and his leadership of the Gates Foundation is by all accounts active and intense.

What is particularly interesting is that—because he is through-and-through the avatar of the digital moment—Gates always approached those efforts (and, by extension, his whole career as the Rich Guy of the millennium’s dawn) with an intensely computerized mindset. Every problem in the world, from climate change, to poverty, to hunger, was to Bill Gates just a logic problem, a bug in the program to be ironed out so that the system runs as smoothly as it can.

This is technocracy in its purest and most intense form. The Third World doesn’t have adequate food supplies? Buy all the land you can and optimize its efficiency to bring global food production up to peak system performance. Generational, regionally concentrated poverty? A few targeted Gates Foundation grants and programs can … shall we say, relieve population demands … in order to foster opportunity and growth. Progress is lagging, or distributed in some kind of imbalance? Educational inputs are sure to effect correlating outputs.

For a long time, this was how things ran. People confident in their utopian visions would lay out programs for their attainment, and if (like Bill Gates) they had the means, those programs would start to run. Of course, because the world is not actually a computer system, the intended effects have never really materialized. But even still, the technocratic impulse of the digital age held out for quite a while.

If that impulse is to be identified with its most prominent champion, though, then it seems finally to have been snuffed out—or at least removed from the pinnacle of power. The man from Microsoft is no longer on top. In fact, he has experienced one of the most dramatic and precipitous falls from grace in recent memory. His wife, Melinda (née French), has decided on a divorce—perhaps the biggest piece of news to come out in May so far. Soon after the divorce proceedings became public, the New York Times reported that Gates “had [a] reputation for questionable behavior” long before his divorce. Some of the most significant examples of such behavior included bumbling romantic advances towards subordinates and professional acquaintances. Far more damning, however, is reporting from the Daily Beast and elsewhere that Gates’s associations with financier and networking predator Jeffrey Epstein were far more extensive than previously realized. While Bill insists that the relationship has been overplayed by the media, it seems clear that Epstein was the impetus for the couple’s high-profile divorce.

Gates says he was unaware of Epstein’s less respectable activities, and there is no evidence at this point suggesting otherwise. The Daily Beast proposes that the philanthropist approached the relationship in the hopes that the well-connected financier could deliver him a Nobel Prize. It has likewise been suggested that his recent philanthropic and innovative endeavors are aimed toward this singular end.

I’m not sure it’s so simple. Gates—for all his many, massive faults—is actually less shallow than that. He doesn’t just want the Nobel Prize. He wants to earn the Nobel Prize—or, at least, to feel like he’s earned it. Assuming his character is both legible and consistent, he wants it not merely as a credential (granted, the credential), but as acknowledgment that the world has been reshaped in his image—laid out, of course, in binary code. If he gets it now, though, it will be a bit of a surprise; the world is a few years past the kind of malignant optimism that the tech mogul hopes will seal the deal.

With the end of Bill Gates’s era, the systematic and even hopeful elements of technocracy are giving way to more cynical replacements. Methodical, programmatic idealism has lost all the sway it held just a few short years ago. The only oligarchs we’re left with are those whose evil is far more apathetic and amoral than it is ambitious or self-righteous. The Age of Gates is over; the Age of Bezos—in which the reigning few drop both the pretense of a moral vision and the admission of their will to power—has begun. Nobody is pretending that they can run the world towards its ideal ends anymore; they just want to run the world.

EVIL Bill will be replaced by EVIL Melinda!!! They are EQUALLY AS EVIL!! She knows EXACTLY what EVIL Bill has/IS done/doing. I have ZERO doubt that she was/IS a WILLING participant in his PEDO ‘activities’!!!! This POLITICAL THEATRE will paint ‘poor Melinda’ as a VICTIM!!!! Which will be a bold-face LIE!!!!! That FILTH is as PURE EVIL as her husband!!

I’m totally with THAT! When I first heard about them “breaking up” it smacked of like some serious and probably super expensive image change programs like what was done with the hated old “philanthropist” J. D. Rockefeller; “handing out dimes to people in the street” as the cameras bared witness, while the irony of this preposterously ridiculous idea wasn’t even alluded to in the press. A propaganda stunt ala the likes of Edward Bernays. Eddie. Let’s “adjust” the truth in an attempt to make them appear to be normal people with normal problems. “Haven’t you heard? Why just look at… Read more »

Everything is being done by national governments to protect the biggest funder of their public health institutions. No prizes for guessing who that could be…🤔

This is interesting… The UK Department of Health has officially responded to me today on the “Cancer-causing Ethylene Oxide in COVID-19 Lateral Flow Tests” issue. Schools had been pressurising children into doing them three times a week! Response here: https://wirralinittogether.blog/2021/05/26/united-kingdom-latest-cancer-causing-ethylene-oxide-used-on-swabs-in-childrens-lateral-flow-covid-testing-kits-a-statement-is-in-today-from-lord-bethell-of-the-uk-department-of-health-and-social/ 🤔

Nico Napo
Reply to  The Transcriber

Another reason this Plandemic must be fully investigated..starting with Fauci on to W.H.O. and Bill Gates large money gift to W.H.O. that set off this world wide war on Humanity!Poor Prince Phillip didn’t get to live to see The Reset he so desired,maybe his wish to reincarnate as a VIRUS to wipe out us people,will happen.

My investigation of the plandemic, reveals that is mechanism to finalize the New, one world technocratic authoritarian government. Look up Andrew Fauci at Pittsburgh University.

Let me go on record as having no sympathy for Bill Gates. There are billions of other people around who I am concerned and worried about. And the existence of Bill Gates is one of the major reasons I am worried about more people than I have fingers and toes.

He was no hero, he was a thief and a cheat. He never did anything original, stole everything he made his money off of. He doesn’t deserve eulogizing, negative or positive.

Good riddance to the image of one of the many liars, murderers and thieves currently in control of our lives worldwide. But there’s still Melinda, his family and the rest of the Eugenics/Pedophile clan. Evil never dies. It simply transforms into something pleasing for the willfully ignorant and outright stupid to worship. Evil knows. These humans must worship something. Rolling Stones nailed evil and those who perpetuate it–Sympathy for the Devil. Please allow me to introduce myself I’m a man of wealth and taste I’ve been around for a long, long years Stole million man’s soul and faith And I… Read more »

Bill Gates image as one of benevolence, was shattered long before news of his divorce. His many talks about population reduction and his genocidal rampage across 12 African countries and India, with his patented so-called polio vaccines, as well as his development of the ID2020 Quantum Dot Tattoo, says volumes of his heinous intentions against humanity.

It would be a huge mistake to count him out and anyone who writes an article like this is no doubt on his payroll.

So, he’s a philandering prick who hangs out with Epstein as well as a sick eugenicist. Nothing new here. DON’T THEY ALL??

And he’s going through an ugly divorce with a bitter spouse & has already replaced first-wifey with the new girlfriend. And this is supposed to indicate he’s no longer a threat to humanity?

Question everything
Reply to  Victoria

If we let him.