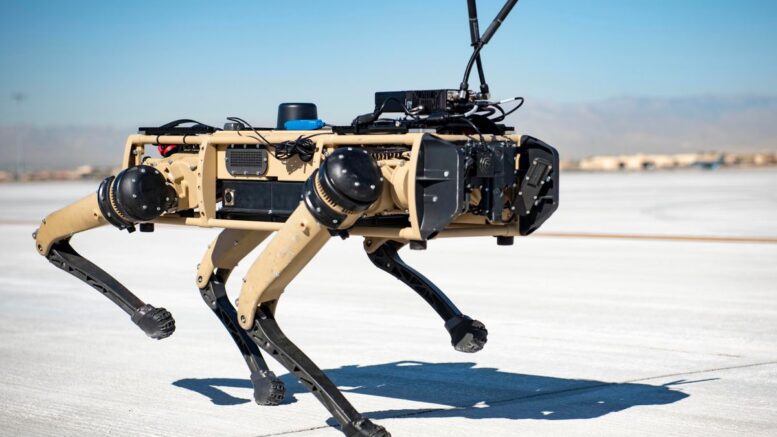 Please Share This Story!
PDF 📄
Don’t rejoice that robo-dogs are going to solve the border crisis, because they will not. Technocrats within the government are merely using the border crisis as an opportunity to test their dystopian technological solutions that are designed to autonomously herd and control groups of people. Such robots are only “search and identify” today but could just as easily be converted into “search and destroy” in the future. ⁃ TN Editor

President Biden’s southern border crisis isn’t going away anytime soon as Republicans stress the need to beef up border security amid a flood of illegals crossing into the US. The Department of Homeland Security (DHS) recently adopted quadrupedal machines to patrol the border’s harsh landscape, extreme temperatures, and dangerous obstacles to search for illegals. 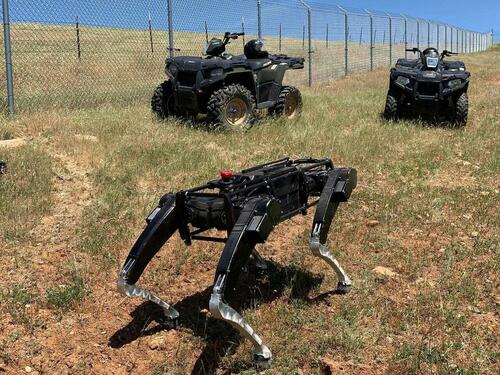 DHS’ research and development team, the Science & Technology Directorate (S&T), released a statement on Tuesday specifying the use of Ghost Robotics’ robot dog ‘Ghost Vision 60’ by the Customs and Border Protection (CBP) on the southern border to test new surveillance methods. The robot dog’s appearance is eerily similar to the rover dogs in the popular dystopian Netflix series “Black Mirror.”

“The southern border can be an inhospitable place for man and beast, and that is exactly why a machine may excel there,” said S&T program manager, Brenda Long. “This S&T-led initiative focuses on Automated Ground Surveillance Vehicles, or what we call ‘AGSVs.’ Essentially, the AGSV program is all about…robot dogs.”

Ghost Vision 60 is a mid-sized high-endurance, agile, and durable all-weather ground drone that can navigate autonomously or be controlled manually on the border. The robot can be equipped with numerous payloads, including thermal and night vision cameras.

The 100-pound robot dog could one day become mechanical reinforcements for border agents who are currently overwhelmed by a flood of illegal activity (thanks to Biden). The robots can traverse areas where border agents would generally stay clear for safety reasons.

“Just like anywhere else, you have your standard criminal behavior, but along the border you can also have human smuggling, drug smuggling, as well as smuggling of other contraband—including firearms or even potentially, WMD.

“These activities can be conducted by anyone from just a lone individual, all the way up to transnational criminal organizations, terrorists or hostile governments—and everything in between,” explained Agent Brett Becker of the CBP Innovation Team (INVNT). 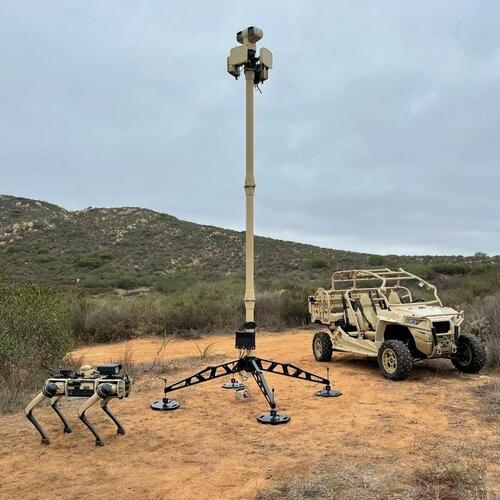 Testing of the robots comes as illegal border crossings hit record highs, detention centers overflow, and cartels incite chaos along the border. Republicans have called the border a “crisis” while the Biden administration downplays the ongoing mess. 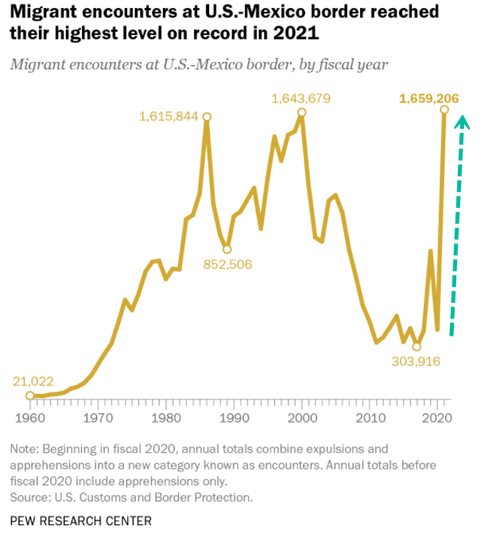 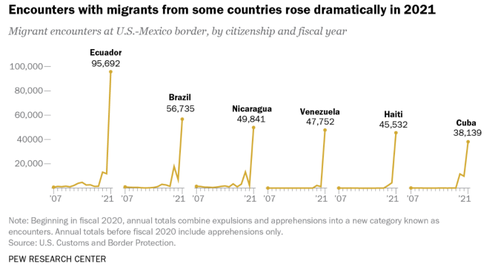 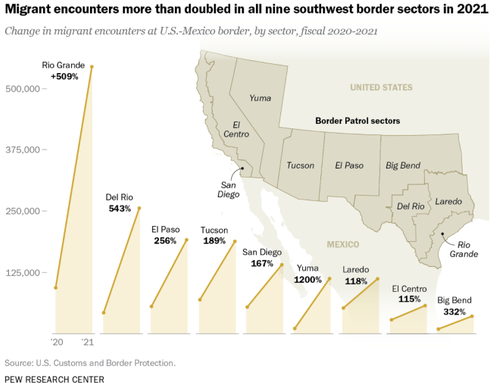 One of Biden’s job-approval ratings has tanked to record lows, partially due to the administration’s poor handling of the border. Republicans have called for increased border security, and states like Texas have taken border security into their own hands instead of the federal government.

Increasing news stories about the “border crisis” resulted in slumping approval ratings for the president. The border is just one of many factors that have led to falling poll numbers (inflation is another).

Will robo-dogs be the solution to stop illegal border crossings? Absolutely not, but it shows the federal government is willing to test new technologies to automate security.

Remember reading about the robot dogs years ago when they were in development by DARPA. And here they are. I want to know the reasons these illegal immigrants are flooding over the border in such huge numbers. Is this an attempt to destabilize the US economy through them? I do not know the entire ugly background on this subject except for the usual claims that globalist colluders are flying loads of illegal immigrants into various states under cover of darkness. I assumed that was about changing the voting lines on a map in totalitarian strongholds like NY State and attempting… Read more »

Apparently they suck at it

When I read about this type of robot I always think of these scriptures,
Joel2:7They run like warriors,
They climb the wall like soldiers;
And each of them marches in line,
Nor do they lose their way.
8They do not crowd each other,
Every warrior of them marches in his path;
When they burst through the defenses,
They do not break ranks.
9They storm the city,
They run on the wall;
They climb into the houses,
They enter through the windows like a thief.