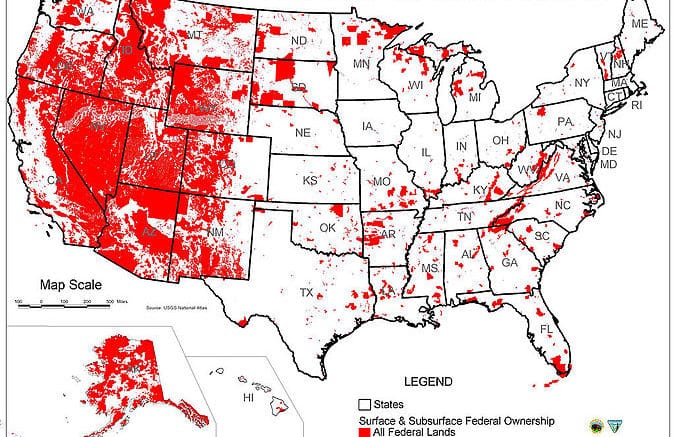 Please Share This Story!
PDF 📄
As of 2017, the BLM owned 248 million acres of US land and continues to expand its portfolio. The laundering of new land is often accomplished through the Nature Conservancy, as was the case in this purchase.

The Nature Conservancy often acquires land through conservation easements, where landowners retain a life estate in their property, and then deed it to the Conservancy upon their death. ⁃ TN Editor

The Bureau of Land Management closed on a $5.6 million property purchase Thursday that adds 7,268 acres to public lands just north of the Blackfoot River.

The purchase is from The Nature Conservancy and uses Land and Water Conservation Fund dollars, which is a federal program whose money comes from offshore oil and gas development. This brings the total of BLM-owned property in the drainage about 25 miles northeast of Missoula to about 27,000 acres, with the eventual goal of expanding the federal agency’s land holdings in the area to 60,000 acres.

The purchase amounts to about $775 per acre.

Joe Ashor, the BLM’s Missoula field manager, said the plan has been in the making for a couple of years. The nonprofit Nature Conservancy bought about 117,000 acres from Plum Creek in 2014 in the greater Blackfoot area to preserve the intact landscape and keep it from being subdivided into ranchettes. When The Nature Conservancy purchased the property, the nonprofit group said it didn’t intend to retain ownership, but wanted to pass it on to the state and federal public agencies.

Ashor anticipates they’ll use $4.5 million in LWCF next year to purchase another 5,760 acres, then make additional purchases in 2021 and 2022.

The purchase comes at a time when federal land managers under the Trump Administration are being accused of wanting to sell off public property, and Ashor said he hopes this will calm some of those fears. In a news release, William Perry Pendley, the BLM deputy director for Programs and Policy, confirmed the support. Pendley previously supported the sale of public lands, but after he was appointed to head the BLM he said he disavowed his past views.

“The BLM, under Secretary (David) Bernhardt’s leadership, is working on multiple fronts to expand access to public lands for all Americans and to increase opportunities for hunting, fishing, and other outdoor recreation on the more than 245 million acres we manage,” Pendley said in the news release. “This important acquisition embodies our commitment, and we’re proud to work with local landowners and sportsmen’s groups to continue to enhance public holdings in the Blackfoot River watershed.”

According to sources on the internet. This means that the U.S. government owns it all. The BLM was created by Truman in 1946 and it’s all about sustainability they say. Their function is as a Law Enforcement Agency of the U.S. government. The budget is $1,162,000,000. The Nature Conservancy is an environmental organization. It’s all about money, locking up all resources of value to themselves. They claim access to the public for use, but many are seeing locked gates with NO access or access denied, to public lands for hunting, fishing, and recreation and even logging. The more they lock… Read more »

Oh and yes, Truman was a 33 degree free mason you know part of the secret elite:http://www.midnightfreemasons.org/2010/09/famous-american-freemason-harry-s_15.html

SCUMBAG THEIVES. The “goverment is not supposed to own anything but forts,ports and 10 square miles. They own half of AmeriKa now? Civil war is a brewing. Get ready

[…] Even groups like the Nature Conservancy are complicit, using donated funds to buy land, which they flip to the BLM.  […]