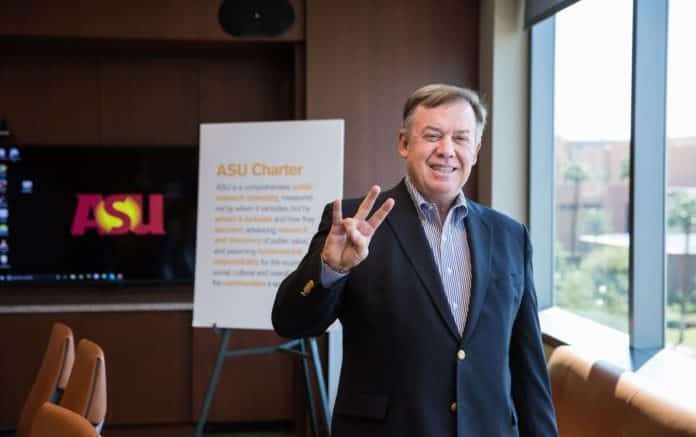 Please Share This Story!
PDF 📄
Michael Crow is a consummate Technocrat who has created a new kind of educational experience at ASU, one that is measured by its social impact rather than traditional statistics like awards or intellectual rigor.

Notably, Crow is also Chairman of the Board of the CIA’s venture capital firm, In-Q-Tel. His In-Q-Tel bio states,

Michael M. Crow became the sixteenth president of Arizona State University on July 1, 2002. He is guiding the transformation of ASU into one of the nation’s leading public metropolitan research universities, an institution that combines the highest levels of academic excellence, inclusiveness to a broad demographic, and maximum societal impact—a model he designed known as the “New American University.”

Under his leadership ASU has established major interdisciplinary research initiatives such as the Biodesign Institute, Global Institute of Sustainability (GIOS), and more than a dozen new transdisciplinary schools, and witnessed an unprecedented academic infrastructure expansion, tripling of research expenditures, and attainment of record levels of diversity in the student body.

To those who ask what ASU’s ranking “#1 in innovation” actually means, ask no further. Perhaps if you’ve seen a billboard or two (or three) on the Price Freeway, you may have noticed that Arizona State University has been rated first in innovation from US News and World Report for five consecutive years.

“Great,” says ASU student Lorenzo Rios, “so what does that actually mean?” Rios’ voice echoes that of countless other students, many of them turning the university’s capitalization on the achievement into a light-hearted joke.

Although these young scholars now exploit the ranking by sarcastically granting their friends nicknames like “innovator” when they complete insignificant tasks, the real-life accomplishments from ASU President Michael Crow are no joke.

In his recent presentation to the Chandler Chamber of Commerce, Crow highlighted he numerous ways that he and his staff have worked toward putting Arizona State at the top of America’s list of robust academic institutions.

Crow served as deputy provost and a senior faculty member of Columbia University in New York City for 12 years before coming to ASU where he has been president for 17 years. Columbia, as Dr. Crow describes, was “too small an arena in too rigid a place,” despite the incredible opportunities he had there.

The level of success we desire in the United States, he says, will not emerge from the establishment institutions like Columbia University, but rather from new places that are able to do new things like ASU.

He continues, “The opportunity here and the reason that I was hired was to take this very large public university which had not yet matured and see if you could actually build a new kind of university.”

Building this new class of education in America is something ASU certainly has accomplished, with many well-established universities following Dr. Crow’s example of innovation.

Becoming #1 in the U.S. for innovation is determined by a peer-based survey from Crow’s counterparts in other academic institutions.

According to the U.S. News and World Report, nominees must demonstrate innovative ways within their campuses to improve in categories such as curriculum, students and faculty or campus facilities and technology.

Dr. Crow describes the process of growth and development as a long and hard-fought game, but the outcome has proven to be worth the fight.

“ASU today is one of the 10 most significant patentors of all universities on the planet. We weren’t even in the top several hundred when we started that process,” he says.