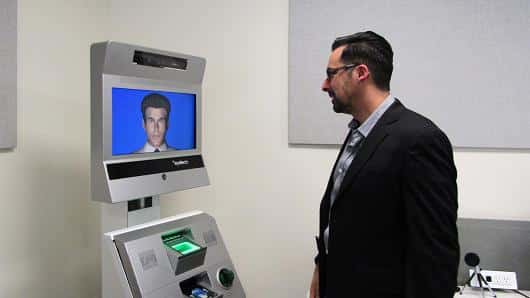 Please Share This Story!
PDF 📄
The scientific solution for border control is robotics equipped with AI to ask a few questions using lie-detecting algorithms. Liars will be dealt with. But what is to prevent this technology from being used everywhere in America?  ⁃ TN Editor

International travelers could find themselves in the near future talking to a lie-detecting kiosk when they’re going through customs at an airport or border crossing. The same technology could be used to provide initial screening of refugees and asylum seekers at busy border crossings.

The U.S. Department of Homeland Security funded development of the virtual border agent technology known as the Automated Virtual Agent for Truth Assessments in Real-Time, or AVATAR, about six years ago and pilot tested it at the U.S.-Mexico border on travelers deemed a low risk. Since then, Canada and the European Union tested the robot-like kiosk that uses a virtual agent to ask travelers a series of questions.

Last month, a caravan of migrants from Central America made it to the U.S.-Mexico border, where they sought asylum, but were delayed several days because the port of entry near San Diego had reached full capacity. It’s possible that a system such as AVATAR could provide initial screening of asylum seekers and others to help U.S. agents at busy border crossings such as San Diego’s San Ysidro.

“The technology has much broader applications potentially,” despite most of the funding for the original work coming primarily from the Defense or Homeland Security departments a decade ago, according to Aaron Elkins, one of the developers of the system and an assistant professor at the San Diego State University director of its Artificial Intelligence Lab. He added that AVATAR is not a commercial product yet but could be also used in human resources for screening.

The U.S.-Mexico border trials with the advanced kiosk took place in Nogales, Ariz., and focused on low-risk travelers. The research team behind the system issued a report after the 2011-12 trials that stated the AVATAR technology had potential uses for processing applications for citizenship, asylum and refugee status and to reduce backlogs.

The AVATAR combines artificial intelligence with various sensors and biometrics that seeks to flag individuals who are untruthful or a potential risk based on eye movements or changes in voice, posture and facial gestures.

“We’re always consistently above human accuracy,” said Elkins, who worked on the technology with a team of researchers that included the University of Arizona.

According to Elkins, the AVATAR as a deception-detection judge has a success rate of 60 to 75 percent and sometimes up to 80 percent.

“Generally, the accuracy of humans as judges is about 54 to 60 percent at the most,” he said. “And that’s at our best days. We’re not consistent.”