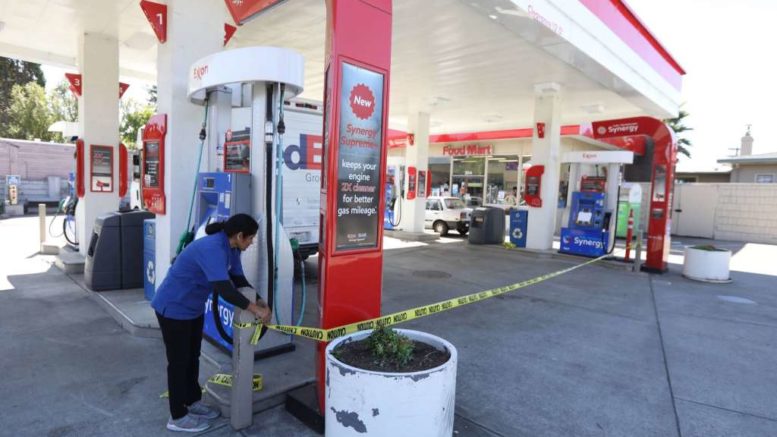 Please Share This Story!
PDF 📄
As California’s largest utility PG&E spins out of control, citizens are regressing to violence, prompting the company to erect concrete barricades around its facilities to ‘protect its employees.’

This is the long-term result of regulatory mismanagement and corporate malfeasance. The ultra-leftist leadership in California has literally turned the Golden State into a banana republic that is a national disgrace. ⁃ TN Editor

Officials at Pacific Gas and Electric Co. on Wednesday called for the public to let employees do their jobs safely amid frustrations with a widespread California power shutdown, after authorities reported that a bullet was fired at one of the energy provider’s vehicles.

The plea came the same day that police say a threatening letter was reported at a PG&E facility, as the utility switched off electricity to hundreds of thousands of people. The planned outage – the biggest in the state’s history, announced as a measure to reduce wildfire risk – comes as PG&E faces massive liabilities for starting a blaze that killed 85 people and destroyed the town of Paradise last year.

“We realize and understand the impact and the hardship as the result of this decision that we’ve made,” Sumeet Singh, vice president of PG&E’s Community Wildfire Safety Program, said at a news conference. But employees and contractors “have families that live in your communities, they have friends that are members of your communities,” Singh added. “So let’s just ensure their safety as well as they are doing this work in the interest of your safety.”

Power companies worried about California’s devastating wildfires are increasingly turning to planned shutdowns. PG&E says this latest, unusually disruptive measure, which could last several days, was prompted by the dry winds like those that helped fuel disastrous fires before. The outages have upset customers, closed schools and workplaces and raised fears that people who rely on electricity for medical needs could be caught unprepared.

Some have questioned this week’s shutdown, which PG&E expects to affect 800,000 people, as excessive. About 650,000 customers were expected to lack power Wednesday evening, according to the company.

“This cannot be something that can be acceptable nor long term,” state Sen. Jerry Hill, a Democrat, told the Los Angeles Times, saying power shutdowns should be “surgical.” “This is Third World, and we are not,” he added.

Lawmakers have also accused PG&E of fueling the risks that prompted the shutdown with poor management and maintenance. Gov. Gavin Newsom, a Democrat, said at a news conference Wednesday that he was outraged by the outage “because it didn’t have to happen.”

Affected residents who spoke to The Washington Post blamed PG&E, too.

“It’s ridiculous, all political,” one Napa Valley man, Gregg Bowman, said. “This company is so screwed up.”

PG&E officials are quick to acknowledge people’s anger but maintain that they are prioritizing people’s safety and balancing dueling threats.

While PG&E responded to the alleged attack on a company vehicle with calls for customers’ understanding, law enforcement has not announced a motive.

A PG&E employee was driving a truck Tuesday evening in Northern California’s Colusa County – before the electricity cutoffs – when a bullet shattered one of the vehicle’s windows, the California Highway Patrol told The Associated Press. The driver was not hurt, according to the AP.

CHP is investigating the incident, which occurred north of the town of Maxwell as the staffer headed southbound on Interstate 5, according to authorities. A white pickup may have pulled up beside the PG&E truck before the shooting, CHP Officer J. Sherwood told the San Francisco Chronicle.

“When you see a marked PG&E vehicle or contractors that are working on our behalf, again just a reminder, they are no different than our customers, and their families and their kids go to the same schools that our customers do,” he said.

Other incidents were raising security concerns elsewhere in the state where PG&E serves about 16 million customers.

Police in Oroville increased their patrols around PG&E properties Wednesday after an “angry customer” egged an office and left a “threatening note,” a department spokeswoman said. The extra patrols will continue for as long as the power outage lasts, she said.

the utility companies should stay out of the decisions to provide power or not. Force the politicians, the smartest people in the world, to decide what to do. The utility companies are run by the PUC, so if there is any “mismanagement” it’s god’s fault, god government.

It’s not safe for Utility company employees to leave their homes, so god should restore power when they decide what to do.

Very funny. Maybe God will “announce a motive” for popping the PGE truck. We all know how consistently concerned he is about motive. Never fear however, God’s ‘authorities’ will certainly inform the angry idiot public about everything. We know that ALL authorities are GOD’s messengers, after all. So I’m waiting to hear that MOTIVE! Give me a MOTIVE!

Geez. Imagine if something BIG did happened, not just wildfires that pull the electricity for a time? Yikes! Under such circumstances I can see CA dropping right off into the ocean.