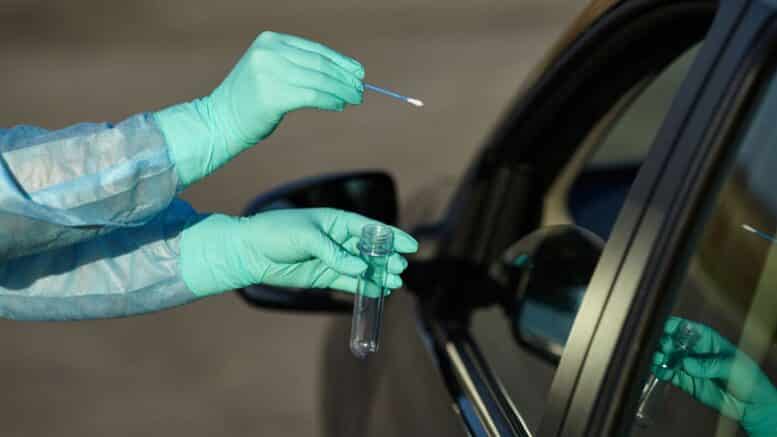 Posted By: James Gorrie via The Epoch Times December 14, 2021

Please Share This Story!
PDF 📄
China is secretly harvesting COVID test data from Americans who, ironically, were forced to be tested by city, state and federal entities. There is only one possible reason for this: biowarfare. This is one of the greatest national security threats ever faced by America because we have no defense against it. This makes nuclear threats of the past look like a field of daises. ⁃ TN Editor

If you’ve had a COVID-19 test, there’s a good possibility that the folks in the Chinese Communist Party (CCP) and the People’s Liberation Army (PLA) have your DNA.

If so, they probably know more about your health and DNA vulnerabilities than you do. The implications of that are disturbing, to say the least.

The company contracted to conduct the COVID-19 tests is Fulgent Genetics, a nationwide DNA sequencing and disease testing firm. According to the firm’s website, its stated mission is, “developing flexible and affordable genetic testing that improves the everyday lives of those around us.”

Apparently, we are to believe that Fulgent Genetics is here to improve all of our lives.

The letter explained that the Federal Bureau of Investigations’ (FBI) Weapons of Mass Destruction Directorate had warned Sheriff Alex Villanueva’s office of the risk that DNA samples, from the COVID-19 tests that Fulgent Genetics was to provide, would “likely be shared with the Republic of China.”

Villanueva also said at a press briefing that “Fulgent had strong ties with BGI, WuXP, and Huawei Technology, all of which are linked to the Chinese Academy of Medical Sciences, the People’s Republic of China State Council and are under the control of the PRC.”

Several questions come to mind. Who or what is the Fulgent Genetics corporation?

Why would an American company wish to provide American DNA samples?

Why on Earth would China even want DNA samples from Americans?

How many American DNA samples do they have already?

And most importantly, what does our DNA have to do with the FBI’s concern with weapons of mass destruction (WMD) from China?

The answers to these and other questions on the stuff of dystopian worst-case scenarios are discussed below. But first, some background on Fulgent Genetics.

Who Is Fulgent Genetics?

The firm was founded in 2011 by Ming Hsieh, chairman of the board of directors, president, and chief executive officer, and James Xie, chief operating officer. Hsieh has served as a trustee at Fudan University in China since 2011. Xie received his Bachelor’s degree in engineering from Chongqing University in China in 1987. Perhaps not surprisingly, both men have deep ties to China.

And apparently, Fulgent has been sharing Americans’ DNA from coast to coast with China. As noted in Villanueva’s statement, it’s not the only PLA proxy company engaged in harvesting Americans’ genetic material. There are others as well, and millions upon millions of people’s DNA from America and many other places in the world have been sent to China.

This is where things get very dark in the weapons of mass destruction department. China wants to create a biowarfare WMD that targets your DNA.

A New, Dark Era of Biowarfare Is Here

Biowarfare isn’t a new thing; it has been used throughout history. In the 4th century B.C., Scythian archers infected their arrows by dipping them in decomposed bodies. In the 14th century, the Tartars catapulted plague-infected dead bodies into the lines of their enemies at the siege of Kaffa. And in World War II, the Imperial Japanese Army bombed Chinese cities with plague-laden fleas.

But these “old school” forms of biowarfare are child’s play compared to the latest DNA-based bioweapons technology that leverages artificial intelligence (AI) and genomics. We are entering a new and very risky era.

Just as AI and genomics enable DNA manipulation to help the human body fight all kinds of diseases, this same technology can also be used to create unique pathogens that only impact specific people. DNA-specific weapons can target a race, a gender, or even a family or individual with a specific DNA structure.

This isn’t just a possibility—it’s a probability, if not already a reality. What’s more, at least in theory, there’s no blowback to DNA-specific bioweapons because they harm only people with specified DNA characteristics. China’s access to Americans’ DNA is unquestionably a national security concern.

Fulgent Genetics states very clearly on their website that they “may store, process and transmit personal information in locations around the world including locations outside the country or jurisdiction where you are located.” The website further states “If you do not want your information transferred to or processed or maintained outside of the country or jurisdiction where you are located, you should not use our Services. The Ventura Board of Supervisors on January 2021, voted unanimously to give Fulgent Genetics Corporation $60-millions dollars for their services. Either government officials are blind, cannot read, or purposely are trying to hurt their own people. People… Read more »

It’s not China that is collecting DNA of people across the world, not just America, it’s the useful idiots who work for the elite commanded by the jewish bankers [those who really control the world] Operation Covid-19 and the social credit system initiated in China because China is a dictatorship, not because China is dictating the moves; China’s government just like other governments, are totally controlled either directly by the jewish bankers, or through their invisible weapon: freemasonry. To promote these ‘china wars’ is to perpetuate the illusions of the ‘cold war’, the ‘west vs east’ and ‘capitalism vs communism’.… Read more »

Its more simple and has nothing to do with China especially. Its a genome industry to hundreds of billions of dollars.
They (Big Corporations) make the nations pay for collecting the samples and to make the sheeple voluntary sign them off legally. All free of charge for the Corporations.
I would think China do it as a defence against US doing it.