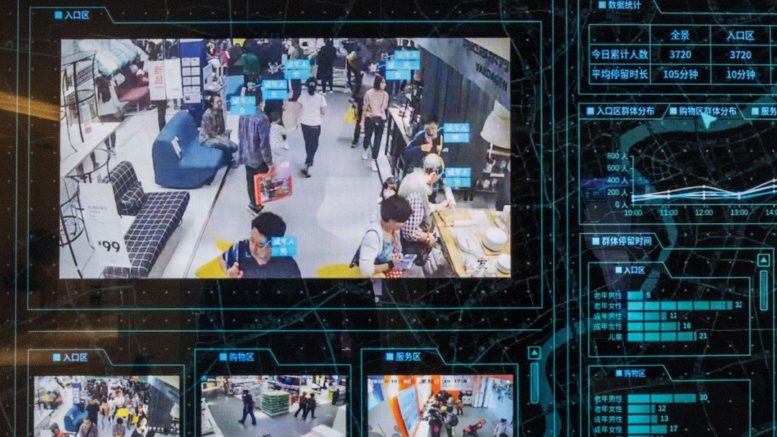 Please Share This Story!
PDF 📄
Jinping’s Scientific Dictatorship, aka Technocracy, relies on ‘a combination of surveillance, AI, and big data to monitor people’s lives and behavior in minute detail.’  MIT correctly notes that China got these ideas in the mid-1980s, but fails to show how. Namely, it was members of the elite Trilateral Commission who sowed the seeds of Technocracy after they brought China out of the darkness and onto the global economic stage. ⁃ TN Editor

In 1955, science fiction writer Isaac Asimov published a short story about an experiment in “electronic democracy,” in which a single citizen, selected to represent an entire population, responded to questions generated by a computer named Multivac. The machine took this data and calculated the results of an election that therefore never needed to happen. Asimov’s story was set in Bloomington, Indiana, but today an approximation of Multivac is being built in China.

For any authoritarian regime, “there is a basic problem for the center of figuring out what’s going on at lower levels and across society,” says Deborah Seligsohn, a political scientist and China expert at Villanova University in Philadelphia. How do you effectively govern a country that’s home to one in five people on the planet, with an increasingly complex economy and society, if you don’t allow public debate, civil activism, and electoral feedback? How do you gather enough information to actually make decisions? And how does a government that doesn’t invite its citizens to participate still engender trust and bend public behavior without putting police on every doorstep?

Hu Jintao, China’s leader from 2002 to 2012, had attempted to solve these problems by permitting a modest democratic thaw, allowing avenues for grievances to reach the ruling class. His successor, Xi Jinping, has reversed that trend. Instead, his strategy for understanding and responding to what is going on in a nation of 1.4 billion relies on a combination of surveillance, AI, and big data to monitor people’s lives and behavior in minute detail.

It helps that a tumultuous couple of years in the world’s democracies have made the Chinese political elite feel increasingly justified in shutting out voters. Developments such as Donald Trump’s election, Brexit, the rise of far-right parties across Europe, and Rodrigo Duterte’s reign of terror in the Philippines underscore what many critics see as the problems inherent in democracy, especially populism, instability, and precariously personalized leadership.

Since becoming general secretary of the Chinese Communist Party in 2012, Xi has laid out a raft of ambitious plans for the country, many of them rooted in technology—including a goal to become the world leader in artificial intelligence by 2030. Xi has called for “cyber sovereignty” to enhance censorship and assert full control over the domestic internet. In May, he told a meeting of the Chinese Academy of Sciences that technology was the key to achieving “the great goal of building a socialist and modernized nation.” In January, when he addressed the nation on television, the bookshelves on either side of him contained both classic titles such as Das Kapital and a few new additions, including two books about artificial intelligence: Pedro Domingos’s The Master Algorithm and Brett King’s Augmented: Life in the Smart Lane.

“No government has a more ambitious and far-­reaching plan to harness the power of data to change the way it governs than the Chinese government,” says Martin Chorzempa of the Peterson Institute for International Economics in Washington, DC. Even some foreign observers, watching from afar, may be tempted to wonder if such data-driven governance offers a viable alternative to the increasingly dysfunctional­looking electoral model. But over-­relying on the wisdom of technology and data carries its own risks.

Data instead of dialogue

Chinese leaders have long wanted to tap public sentiment without opening the door to heated debate and criticism of the authorities. For most of imperial and modern Chinese history, there has been a tradition of disgruntled people from the countryside traveling to Beijing and staging small demonstrations as public “petitioners.” The thinking was that if local authorities didn’t understand or care about their grievances, the emperor might show better judgment.

Under Hu Jintao, some members of the Communist Party saw a limited openness as a possible way to expose and fix certain kinds of problems. Blogs, anticorruption journalists, human-rights lawyers, and online critics spotlighting local corruption drove public debate toward the end of Hu’s reign. Early in his term, Xi received a daily briefing of public concerns and disturbances scraped from social media, according to a former US official with knowledge of the matter. In recent years, petitioners have come to the capital to draw attention to scandals such as illegal land seizures by local authorities and contaminated milk powder.

But police are increasingly stopping petitioners from ever reaching Beijing. “Now trains require national IDs to purchase tickets, which makes it easy for the authorities to identify potential ‘troublemakers’ such as those who have protested against the government in the past,” says Maya Wang, senior China researcher for Human Rights Watch. “Several petitioners told us they have been stopped at train platforms.” The bloggers, activists, and lawyers are also being systematically silenced or imprisoned, as if data can give the government the same information without any of the fiddly problems of freedom.

The idea of using networked technology as a tool of governance in China goes back to at least the mid-1980s. As Harvard historian Julian Gewirtz explains, “When the Chinese government saw that information technology was becoming a part of daily life, it realized it would have a powerful new tool for both gathering information and controlling culture, for making Chinese people more ‘modern’ and more ‘governable’—which have been perennial obsessions of the leadership.” Subsequent advances, including progress in AI and faster processors, have brought that vision closer.

As far as we know, there is no single master blueprint linking technology and governance in China. But there are several initiatives that share a common strategy of harvesting data about people and companies to inform decision-making and create systems of incentives and punishments to influence behavior. These initiatives include the State Council’s 2014 “Social Credit System,” the 2016 Cybersecurity Law, various local-level and private-enterprise experiments in “social credit,” “smart city” plans, and technology-driven policing in the western region of Xinjiang. Often they involve partnerships between the government and China’s tech companies.