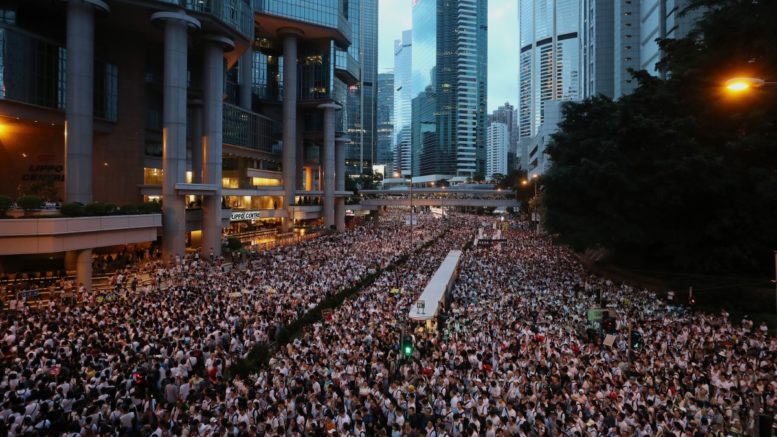 The extraordinary demonstration of defiant sentiment must have given officials pause for serious reflection. But Beijing’s and the government’s resolve remains undiminished. Photo: Sam Tsang

Please Share This Story!
PDF 📄
Certain frequencies that do not normally appear in nature in harmful intensities, can be used as a potent weapon leading to incapacitation, hearing loss, vomiting, organ damage and heart attacks. Yet another Technocrat solution to social engineering. ⁃ TN Editor

The rifle-shaped instrument, which was jointly developed with military and law enforcement, is designed to disperse crowds using focused waves of low frequency sound, the academy’s Technical Institute of Physics and Chemistry website said on Wednesday.

The device’s “biological effect” would cause extreme discomfort, with vibrations in the eardrums, eyeballs, stomach, liver, and brain, scientists said.

Studies dating to the 1940s found that low frequency sound energy could, depending upon intensity and exposure, cause dizziness, headaches, vomiting, bowel spasms, involuntary defecation, organ damage and heart attacks.

Sonic weapons are typically large and have to be mounted on vehicles. Until the Chinese development, which has no moving parts, they were powered by electricity to drive a magnetic coil to generate energy. This meant they needed a large and stable source of power.

The Chinese government launched the sonic weapon programme in 2017 and its conclusion is unlikely to be related to the months of anti-government protests in Hong Kong.

Professor Xie Xiujuan, lead scientist on the project, said the device was powered by a tube-shape vessel containing an inert gas. When heated, the gas particles vibrate and a deep, monotonous sound is emitted.

The prototype had passed field and third-party tests and the project team has completed its assessment of the device’s effects on the body, the academy said.

Nothing new here. China is no different that the USA. Hand-held is a simple add-on like corporations who sell products with “something new” to get consumers to purchase. Sonic weapons were developed as early as the 60’s by people in the US military/corporate military contracts that you do not want to know–yes, they ARE that dangerous.

Directed Energy Weapons are being tested on innocent civilians domestically.
DEW’S maim, torture and slow kill covertly. Victims both here and China lash out.
Tormented victims kill themselves or others (mass shootings).
The existence can be confirmed see: Accident FOIA leak from Washington Fusion Center.