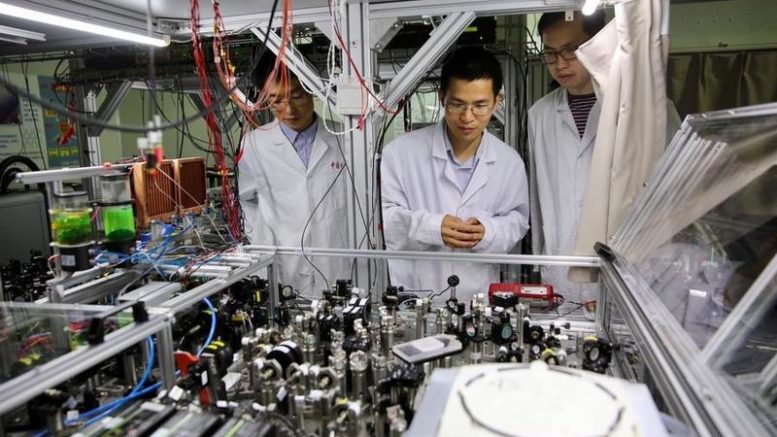 Quantum technology is important because it could potentially lead to total domination over Internet security, censorship and control. Chinese Technocrats are intent on leading this disruption. ⁃ TN Editor

More than a decade ago, Chinese physicist Pan Jian-Wei returned home from Europe to help oversee research into some of the most important technology of the 21st century.

At a conference in Shanghai this summer, Pan and his team offered a rare peek at the work he described as a “revolution.”

They spoke of the hacking-resistant communications networks they are building across China, the sensors they are designing to see through smog and around corners, and the prototype computers that may someday smash the computational power of any existing machine.

All the gear is based on quantum technology – an emerging field that could transform information processing and confer big economic and national-security advantages to countries that dominate it. To the dismay of some scientists and officials in the United States, China’s formidable investment is helping it catch up with Western research in the field and, in a few areas, pull ahead.

Beijing is pouring billions into research and development and is offering Chinese scientists big perks to return home from Western labs. China’s drive has sparked calls for more R&D funding in the United States, and helped trigger concerns in the Trump administration that some types of scientific collaboration with China may be aiding the People’s Liberation Army and hurting U.S. interests.

“The United States must be prepared for a future in which its traditional technological predominance faces new, perhaps unprecedented challenges,” the Center for a New American Security wrote in a recent report about China’s quantum ambitions.

Last year, China had nearly twice as many patent filings as the United States for quantum technology overall, a category that includes communications and cryptology devices, according to market research firm Patinformatics. The United States, though, leads the world in patents relating to the most prized segment of the field – quantum computers – thanks to heavy investment by IBM, Google, Microsoft and others.

Helping oversee China’s program is Pan, whom Chinese media call the “father of quantum.” From his labs at the University of Science and Technology of China (USTC), in Shanghai and Hefei, the 49-year-old leads a team of 130 researchers. In 2017, the journal Nature named him one of “ten people who mattered this year,” saying he had “lit a fire under the country’s efforts in quantum technology.”

Pan occasionally gives lab tours to President Xi Jinping, who takes a keen interest in his work, according to Chinese media. Pan is also overseeing plans for a new national lab for quantum research in Anhui province, which he said had drawn about $400 million in government funding.

At the Shanghai event, Pan illustrated his slide presentation with science-nerd jokes about Einstein and “Star Trek.” In a nod to Schrödinger’s cat – a 1930s thought experiment that helped define a quantum concept called superposition – Pan used images of a cartoon feline standing upright and lying flat on its back.

“As we all know, in our everyday life, a cat can only either be in an alive or dead state,” Pan said, but “a cat in the quantum world can be in a coherent superposition of alive and dead states.”

He was making the point that quantum particles, also known as quantum bits, differ fundamentally from the bits in today’s technology. Existing computers and communications networks store, process and transmit information by breaking it down into long streams of bits, which are typically electrical or optical pulses representing a zero or one.

Quantum bits, or qubits, which are often atoms, electrons or photons, can exist as zeros and ones at the same time, or in any position between, a flexibility that allows them to process information in new ways. Some physicists compare them to a spinning coin that is simultaneously in a heads and tails state.

In his talk, Pan detailed how China is harnessing qubits to safeguard its communications from hacking – one of the fields in which China appears to have a lead over the West.