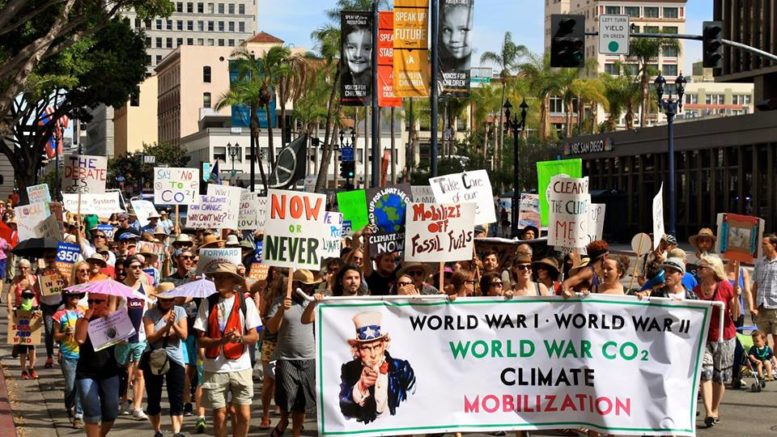 Please Share This Story!
PDF 📄
Green Technocrats are demanding that global warming critics be silenced because they are exposing the total fraud being perpetrated on the world in order to promote Sustainable Development, aka Technocracy. ⁃ TN Editor

“Some media outlets are sacrificing the future of our planet for the sake of appearing objective,” Margaret Klein Salamon, founder and executive director of The Climate Mobilization, said in a news release Saturday.

“This idea of equating climate deniers with scientific experts is a dangerous practice which frames the threat to our planet, our existence as an ongoing debate,” Klein Salamon added. “I don’t think sacrificing the future of our planet in exchange for a look of ‘objectivity’ is an even exchange. It’s one the coming generation will judge us on, if we don’t move with the urgency necessary to fight back against global warming and win.”

In other words, climate alarmists aren’t just calling for radical changes to America to stave off some hypothetical climate disaster — they’re also calling for opposing voices to be silenced. “Science” can only have one voice, and that voice must be Chicken Little.

The Climate Mobilization seized on a Newsweek article about a study from Nature Communications. The study’s authors claimed that the U.S. news media gives “climate change deniers too much prominence by placing people with little understanding of the complexities involved in the same league as top scientists.”

“It’s time to stop giving these people visibility, which can be easily spun into false authority,” University of California Merced Professor Alex Petersen said in a statement. Petersen and his team traced the digital footprints of voices for and against climate alarmism across 100,000 media articles. They found that about half of mainstream outlets seek out “climate denying” experts.

Many outlets will present both sides of the issue, including one scientist echoing the climate alarmist mantra and another expert who disagrees — and who therefore must not be a real scientist, the article suggested.

“It’s not just false balance; the numbers show that the media are ‘balancing’ experts—who represent the overwhelming majority of reputable scientists—with the views of a relative handful of non-experts,” Professor LeRoy Westerling, the study’s author, said in a statement. “Most of the contrarians are not scientists, and the ones who are have very thin credentials. They are not in the same league with top scientists. They aren’t even in the league of the average career climate scientist.”

Yet the Nature Communications study notes that 224 of the 386 “climate change contrarians” quoted by the media have at least one publication in peer-reviewed scientific journals. The study did not mention how many of the “climate change scientists” quoted by the media had published articles, but the authors selected 224 of their papers and showed how their papers were more heavily cited.

If the professional world of climate science is dominated by the ideology of climate alarmism, it would make sense that climate alarmists are more heavily cited than climate skeptics. In January 2017, Judith Curry, former chair of the School of Earth and Atmospheric Sciences at Georgia Tech, resigned, calling out the alarmist ideology that increasingly dominates her field.

“I no longer know what to say to students and postdocs regarding how to navigate the CRAZINESS in the field of climate science,” Curry wrote. “Research and other professional activities are professionally rewarded only if they are channeled in certain directions approved by a politicized academic establishment — funding, ease of getting your papers published, getting hired in prestigious positions, appointments to prestigious committees and boards, professional recognition, etc.”

“How young scientists are to navigate all this is beyond me, and it often becomes a battle of scientific integrity versus career suicide (I have worked through these issues with a number of skeptical young scientists),” Curry wondered.

In other words, climate science is becoming an ideological echo chamber that rewards alarmism and silences dissenting voices, even when the dissenters are good scientists like Curry.

The study also parroted the blatantly false claim that there is a scientific consensus on the issue — citing the Cook study from 2013. The Cook study notoriously misrepresented the scientific literature to claim a 97 percent consensus, and activists continue to cite it as if it were gospel truth.

But here’s the kicker: many scientists whose papers were included in the study complained that the papers were misinterpreted as supporting man-made global warming when they did not.

It’s ok for the puppet AOC and her cadre of walking sleepers to push their BS on the public. But it’s not ok for the public to hear an opposing opinion/study? How Nazi is that? It appears she sees herself as an authority–gads. The woman is delusional. AOC and her cadre of idiots apparently never heard of a little document called the US Constitution or the guaranteed Bill of Rights set down by men who opposed a tyrannous regime JUST LIKE HERS. England wanted the same thing AOC wants–to silence all opposition, in all forms, so they could win. England… Read more »

AND, now the Mann vs. Ball case has reached it’s conclusion after 7-yrs. We have CONSPIRACY FACTS here of collusion between the US government and Dr. Mann. Mann’s Climate Change data was falsified–undeniably. The world governments and the UN built their carbon exchanging profiteering model on that data, shaming the public and leading the now AOC-type Green Deal stupidity to cause enormous fear among humanity.

I expect, like Brexit, the self-appointed elites will demand another verdict–one that continues to profit for them.

Some Ramblings on Sin, Salvation, and Eschatology: Part 4.1 – biblebookworm

[…] 9. See Jay Seegert, Kent Hovind’s older lectures, Evolution’s Achilles Heels, Walter Veith (a former atheistic evolution professor whose scientific research led to his conversion to Christianity); also look up secular scientists who dismiss evolutionary theory – I don’t have the time on grid to gather these sources, but there are plenty out there to be found. There is also much to be said about the peer pressure and funding pressures in the world of academia undermining and censoring research and evidence which challenges the status quo, on top of the censoring of scientists and studies in media and… Read more »