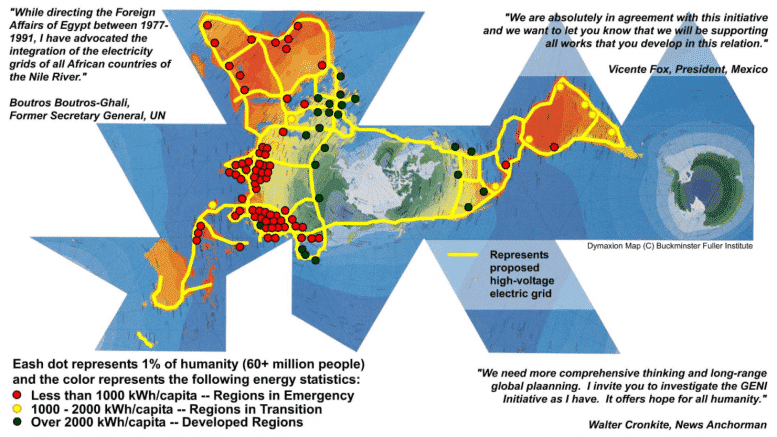 Please Share This Story!
PDF 📄
China’s call for a “global intercontinental energy system that will unite the electric power networks of the whole world” is identical to the Global Energy Network Institute’s (GENI) ”energy web” or “Internet of Energy.” I covered the global smart grid in Chapter 8 of Technocracy Rising: The Trojan Horse of Global Transformation in 2015. Control over energy production and consumption is a prime directive of Technocracy as a means to control all economic activity. ⁃ TN Editor

Eurasian economic integration is one of the important goals that Russia and China are striving for. By combining their economies, the countries of Eurasia will be able to turn their region into the most powerful player on the world stage with all the resulting benefits. The Eurasian Economic Union (EAEU) and the Chinese project ‘New Silk Road’ (NSR) exist for this purpose. However, integration requires not only the removal of trade barriers (this is successfully handled by the EAEU) and not only a unified transportation infrastructure (in the form of NSR), but also the creation of a unified energy system on the continent. This is one of the most important projects of Russia and China; the countries playing the key role in the Eurasian integration project.

In September 2015, Chinese President Xi Jinping spoke to the UN General Assembly about the creation of a phased-project regarding a global intercontinental energy system that will unite the electric power networks of the whole world and transfer most of them to clean energy sources. This can be achieved by 2050 with a fair level of international cooperation, according to Chinese experts.

In March 2016, on the initiative of the People’s Republic of China, an international organisation for the development and cooperation of the Global Energy Association (GEIDCO) was established. It was chaired by world-renowned energy expert Liu Zhenya, Chairman of the Board of Directors of the State Electric Grid Corporation of China. GEIDCO also included prominent representatives from the energy sector in Russia, the United States, and Japan. In total, the Organisation has more than 260 members from 22 countries that are specialists in energy, economics, environmental protection, and other fields.

In May 2016 the presentation of the book ‘Global Energy Association’ by Liu Zhenya took place in Moscow. This book outlines the project of the same name for the creation of a worldwide electric power network, the one which Xi Jinping spoke about. According to the Chinese side, this project must be carried out for the full implementation of the global project ‘One belt, one path’.

Due to seasonal weather changes, many countries have periods of peak energy consumption and periods of decline. Because of climatic differences in different countries, these periods occur at different times of the year. This means that a country experiencing a decline in consumption can sell its surplus energy to a country experiencing a peak period. This long-standing idea of a unified world energy system is very tempting, because a harmonious distribution of electricity would help provide regions that are in short supply and would permit a surplus to go to waste. The saving of electricity and the resulting reduction in harm to the environment are the advantages that Liu Zhenya focuses on in his book. As is well known, ecology is one of the most pressing problems in modern China. The project suggests the active use of alternative energy sources depending on their availability in different climatic conditions. It is planned to develop solar energy in southern latitudes, while developing wind resources in northern ones. According to the Chinese, in the event of the successful implementation of the Global Energy Association (GEA), up to 80% of the world’s electricity by 2050 can be produced by environmentally friendly methods.

The first step on the road to the GEA will be the modernisation and integration of China’s energy networks. This is planned to be carried out by 2025. Ultra-high voltage networks and smart grid technology will be widely used in the unified Chinese energy system. If successful, the united networks of China will become a model for a future global unification.

The PRC is hoping on the help of Russia to carry out its plan. Due to its geographical position and developed energy system, Russia is a natural bridge between Europe and Asia. Russian electricity networks are already now connected with the networks of 11 neighbouring countries. It is through the territory of Russia that the European and Asian energy networks should be connected. Representatives of the government and energy of the Russian Federation, present during the presentation, enthusiastically embraced the new Chinese project. It was supported by the Ministry of Energy of the Russian Federation and the largest Russian energy company ‘Rosset’. According to their representatives, the GEA is one of the most important projects of the 21st century, which will help humankind to provide itself with energy along the rational use of natural resources. In addition, the joint work of Russia and China on the GEA will lead to the significant strengthening of their bilateral relations.

In the area of energy, Russia and China have already been cooperating for a long time. According to the Chinese Ambassador to Russia Li Huai, there is a comprehensive strategic partnership between the countries on all types of energy, which is already bearing fruit. According to the Chinese, it is the energy cooperation between Russia and China that laid the framework for the GEA.

For several years, ‘Rosset’ and the State Energy Commission of China have been working on the China-Russia-Europe energy bridge project. The old project ‘Asian Energy Ring’, designed to unite the power grids of Russia, China, the Republic of Korea, Japan, and many more countries of South-East Asia, has received new life. With time, both of these projects will become an important part of the GEA.

Another important sub-project of the GEA, which is already under way, is the ‘North-South’ energy corridor, which will connect the power grids of Armenia, Georgia, Iran, and Russia. In its creation, in addition to ‘Rosset’ and the State Energy Commission of the People’s Republic of China, a number of companies from other countries, including Germany, are participating. After a long investigation regarding possible environmental consequences and economic feasibility, it was decided to begin construction of the power transmission line and two substations in Armenia by the end of 2017.

It should also be recalled that in 2019, the work of the General Electricity Market of the EAEU is planned to begin.

One Belt One Road is technocrats huge suction tunnel. It sucks in all the raw materials and resources towards china.

North America has its energy strategic plan too – it is called Grid 2030 and can be found at the Dept of Energy website, along with its followup report – Technologies Roadmap.
One of the 2030 goals? “Intercontinental bulk transfers of power”.