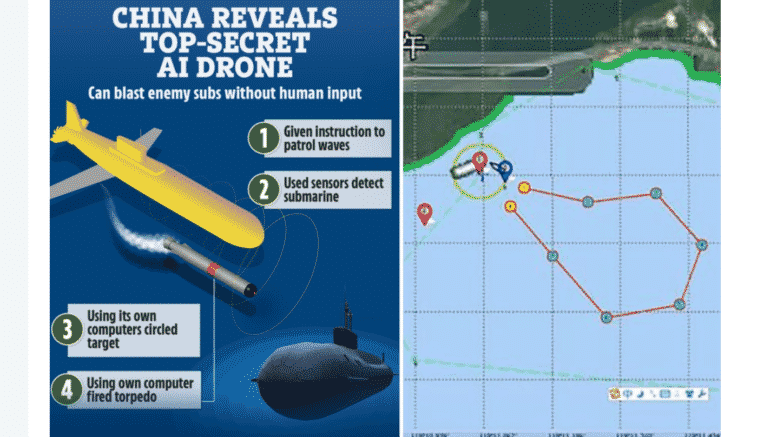 image via The Sun

Please Share This Story!
PDF 📄
TN has long tracked Technocrat efforts to create autonomous agents of destruction via killer robots and drones, and a new arms race is clearly underway. This is bad news for China’s enemies who deploy nuclear submarines. ⁃ TN Editor

China has revealed it is developing a top secret underwater drone designed to track and destroy enemy submarines with no human input.

The unmanned attack robot was first test fired in the Taiwan Strait a decade ago but its existence was not made public until now.

The project to build the drone was funded by the People’s Liberation Army and dates back to the 1990s, reports the South China Morning Post.

Under testing, it was reportedly able to detect a dummy submarine, identify its origin and hit it with a torpedo.

The craft is said to rely entirely on artificial intelligence and does not need any instructions from an operator.

Details of the part-declassified project were revealed in an academic paper last week.

Researchers described a 2010 test in the Taiwan Strait in which a drone was programmed to follow a pre-set course around 30ft below the surface.

When its sonar detected another craft, the drone changed course and circled the target, using onboard sensors to gather readings which were analysed by its computer.

It then fired autonomously and hit the dummy submarine with an unarmed torpedo.

Professor Liang Guolong, who led the team, said that with more advanced technology the drones would be able to hunt in packs.

“The needs of future underwater warfare bring new development opportunities for unmanned platforms,” the researchers said in their paper, published in the Journal of Harbin Engineering University on Friday.

Observers said the timing of the paper was significant as it comes amid rising fears China might invade self-ruled Taiwan.

It also sends a signal to the US and its allies that any defence of the independent island nation would be fraught with risk.

I would hope that they understand that it could trigger an all out war with all of taiwan’s allies. This is where solidarity needs to be present and on full view. Although China’s brash geo projection, agenda, and political ego might have blinded them to that fact. Plus they are brazen enough to think that Taiwan is not worth it to drag their allies into a regional conflict on a much larger scale. Certainly gives them more empattance given our current political make up in the white house. I feel sorry for Taiwan, I see the current administration as doing… Read more »