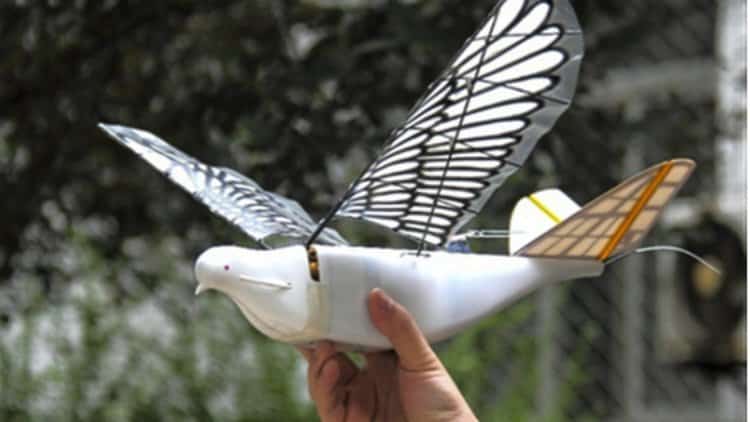 Please Share This Story!
PDF 📄
Technocrats in China constantly dream up new ways to gather data from the social environment. Robotic doves equipped with cameras are virtually undetectable from real birds, and can be deployed in flocks. The stealth birds might be covered with real feathers in order to avoid radar and sonic detection. ⁃ TN Editor

If you’ve ever looked up to the sky and enjoyed the sight of a bird gliding above, be warned: it could be a Chinese drone monitoring your every move.

The idea might seem far fetched, but robotic birds are very much a reality, and China has been using them to surveil people across the country.

Sources told the South China Morning Post that more than 30 military and government agencies have deployed the birdlike drones and related devices in at least five provinces in recent years.

One part of the country that has seen the new technology used extensively is the Xinjiang Uygur autonomous region in China’s far west. The vast area, which borders Mongolia, Russia, Kazakhstan, Kyrgyzstan, Tajikistan, Afghanistan, Pakistan and India, is home to a large Muslim population and has long been viewed by Beijing as a hotbed for separatism. As a result, the region and its people have been subjected to heavy surveillance from the central government.

The new “spy birds” programme, code-named “Dove”, is being led by Song Bifeng, a professor at Northwestern Polytechnical University in Xian, capital of northwestern China’s Shaanxi province. Song was formerly a senior scientist on the J-20 stealth jet programme and has already been honoured by the People’s Liberation Army – China’s military – for his work on Dove, according to information on the university website.

Yang Wenqing, an associate professor at the School of Aeronautics at Northwestern and a member of Song’s team, confirmed the use of the new technology but said it was not widespread.

“The scale is still small,” compared to other types of drones in use today, she told the South China Morning Post.

“We believe the technology has good potential for large-scale use in the future … it has some unique advantages to meet the demand for drones in the military and civilian sectors,” she said.

Unlike unmanned aerial vehicles with fixed wings or rotor blades, the new drones actually mimic the flapping action of a bird’s wings to climb, dive and turn in the air.

Another researcher involved in the Dove project said the aim was to develop a new generation of drones with biologically inspired engineering that could evade human detection and even radar.

The machines in China’s current robot flock replicate about 90 per cent of the movements of a real dove, the person said, adding that they also produce very little noise, making them very hard to detect from the ground, and are so lifelike that actual birds often fly alongside them.

The team conducted almost 2,000 test flights before deploying the drones in real-life situations, said the researcher, who asked not to be named due to the sensitivity of the programme.