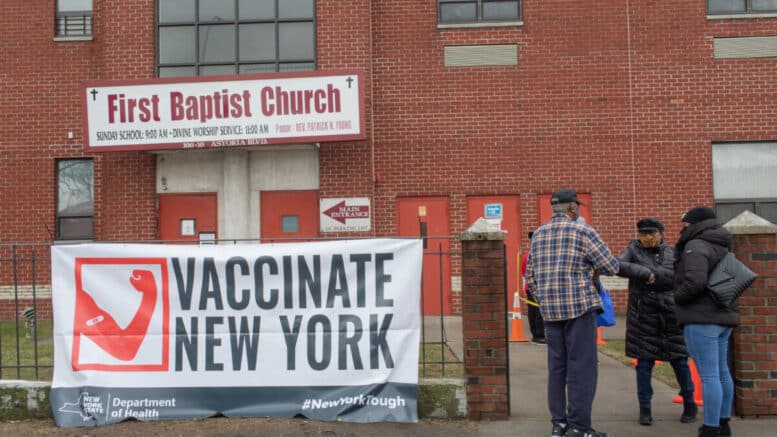 Please Share This Story!
PDF 📄
Many churches are being coopted into the Technocrat/Transhuman goal of hacking the human genome, which is rapidly morphing into the greatest genocidal episode in the history of the world. Some churches promote injections for free while others do it to receive federal funds. Most Christians trust their church to protect them from the storms of life, both internal and external. ⁃ TN Editor

According to a report in the Epoch Times, the state of Pennsylvania is paying churches to convince their members to get vaccinated.

Pennsylvania Governor Tom Wolf’s administration wants pastors, rabbis and other faith leaders to turn their houses of worship into centers for “vaccination events,” using federal grant money as an incentive to lure churches into a partnership with the government.

But this is not just going on in Pennsylvania as reported by the Epoch Times. It’s going on across the United States.

The Epoch Times article reports that Pennsylvania’s public health leaders want to “harness the power of community trust in statewide faith-based organizations” to convince people to get a COVID-19 gene-therapy injection. That is a quote from the mission statement of an organization called the Faith-based Organization Coalition. This organization, the Epoch Times reports, is being formed under the state’s Department of Health and is expected to launch April 11.

The state aims to reduce vaccine hesitancy through the “Local Innovations in Vaccine Equity in Pennsylvania” project (LIVE PA), which is a grant program that pays churches and nonprofits to speak with their people and persuade them to get vaccinated, according to the Epoch Times.

And how much are these corrupt churches being paid by the government?

They reportedly get $10 for each person-to-person outreach including direct phone calls and text messages, direct social media messages, door-knocking campaigns, “and anything that involves one-on-one dialogue promoting the COVID-19 shot.”

The church or other nonprofit gets another $10 for each person who actually goes and rolls up his or her sleeve for the shot.

“LIVE PA is a collaboration between the Wolf Administration’s Office of Advocacy and Reform and the departments of Health and Human Services, working closely with United Way of Pennsylvania to fund hyper-local, grassroots nonprofit and faith-based organizations to partner with certified vaccine providers to help the populations they serve overcome barriers to vaccination.”

Is your church or favorite ministry one of these organizations sucking up tax dollars to poison and sterilize their congregants and followers? It’s not just local churches, but big ministries that are involved in this evil.

I reported previously that the the Vatican was encouraging Catholic churches to partner with governments worldwide to promote the vaccine, and some of the big-name evangelical ministries such as Samaritan’s Purse are doing the same.

I received hateful emails for weeks because folks didn’t want to believe that such a trusted name in evangelical circles as Samaritan’s Purse could be involved in this plan to vaccinate every man, woman and child with an unproven, untested, and now proven deadly serum. If you still don’t believe it, don’t trust me: Read here, here and here.

Many other churches and ministries are involved in this deadly propaganda campaign. My advice would be to check with your pastor and/or the financial records keeping department of your favorite ministries and ask if they have or ever will accept any of these funds.

I did a quick online search and found several examples of churches participating in this.

You can find hundreds of such examples online of collusion between corrupt churches and the corrupt medical/pharma complex, all feeding off of taxpayer dollars.

I am sure not every one of these churches is being paid to promote this death shot. Some are no doubt doing it for free, thinking they are doing the Lord’s work. There are no more excuses for that kind of stupidity. That’s equally shameful.

When the lid finally blows on this story, and the perpetrators of the greatest crime in human history are exposed, every one of these church leaders will be held accountable for their roles in what is quickly becoming a genocide.

McNaughton, with the United Way in Pennsylvania, told the Epoch Times that working with faith-based organizations has been very helpful. I bet it has. Here is what she said:

“We have been thrilled to partner with local faith-based organizations because they are often trusted representatives with long, established histories in their communities. The remaining population of people who are not fully vaccinated are experiencing barriers such as lack of trust or lack of access. Faith-based organizations are uniquely placed to have long histories with the populations they serve and have earned mutual trust with them. Their efforts to promote the vaccine to their congregations and the communities they serve through their charity work have been successful at reaching vaccine-hesitant populations.”

Number one, those churches didn’t become trusted by working with corrupt governments that force experimental medical treatments on their citizens.

Number two, how can this promotional work be considered “charity” if the churches are being paid to do it?

This is not earning trust. This is abusing trust, which is exactly what the globalist elites said they would do when they sat down at Event 201 conference in October 2019 to run a simulation of the coming global coronavirus pandemic. If you listen to those seminars, they made it very clear that they would tap into “trusted sources” in the community to promote their narrative and destroy competing narratives about the pandemic and the best way to combat it.

Recruiting pastors to entice their flocks to accept a medical treatment they know nothing about is fraud and abuse against the people of God. Only an extremely naive and stupid pastor, or one who is an evil globalist, would agree to work with the government on such an devious plan.

With more data coming out every day on not only the failed efficacy of these injections but the dangers to health and safety, there are simply no more excuses left for pastors to be naive.

God have mercy on any pastor or ministry leader who is participating in this program.

Lord please forgive me for saying this but it seems that a vast majority of people who claim they are Christian but really do not follow your ways an teachings. Please come soon and please remember me when you do. I know I don’t deserve anything from you but I do accept you as my savior and try to follow you as best I can and I take you at your word that my faith and belief in you in you is what is necessary to make the difference between eternal life with you or eternal destruction. I deserve nothing… Read more »

LOL! Churches were the first line of strategy played by the sons of the adversary to corrupt the understanding of any truth that might have lingered after their brutal destruction of the Roman Empire. They play the same cards over and over again because previous generations are nearly persecuted out of existence and truth gets lost. But if you don’t know who you are or who your enemy is, you will lose every battle.

“We have been thrilled to partner with local faith-based organizations because they are often trusted representatives with long, established histories in their communities. The remaining population of people who are not fully vaccinated are experiencing barriers such as lack of trust or lack of access.” Barriers such as lack of trust? OMG! You’d think a million dead/injured people wouldn’t give them such a lack of trust, huh? I just love the use of the predator marketing phrase vaccine hesitancy (it’s so polite). While their goal is to murder more of humanity with this attempt to pull in corruptible religious leaders… Read more »

Is it only limited to churches, or is expanding in Mosques, synagogues, temples as well ?