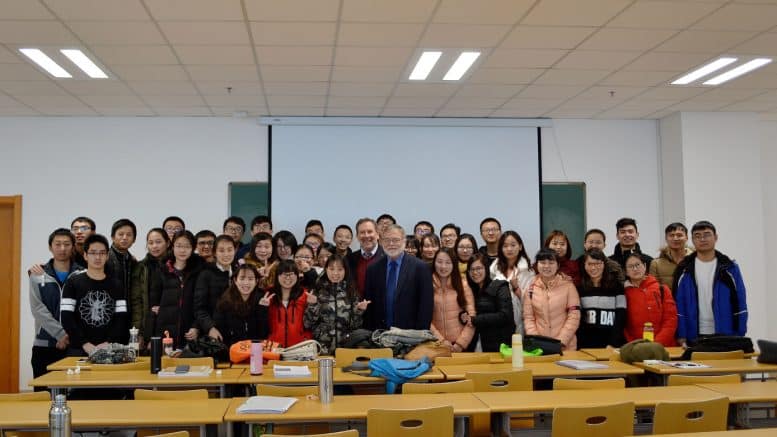 Please Share This Story!
PDF 📄
The Chinese are very clever to weaponize capital in order to achieve devious ends. In this case, the CCP (Chinese Communist Party) funds selected academic institutions or projects in order to coerce them into self-censorship according to Chinese policies. Congress should block such funding. ⁃ TN Editor

In an unclassified page of the report obtained by the Washington Free Beacon, the CIA cautions against efforts by the Chinese Communist Party to stipulate funding to universities and policy institutes in exchange for academic censorship.

“The CCP provides ‘strings-attached’ funding to academic institutions and think tanks to deter research that casts it in a negative light,” the report says. “It has used this tactic to reward pro-China viewpoints and coerce Western academic publications and conferences to self-censor. The CCP often denies visas to academics who criticize the regime, encouraging many China scholars to preemptively self-censor so they can maintain access to the country on which their research depends.”

The CIA warning joins a growing call by U.S. lawmakers and intelligence officials to investigate China’s involvement on American college campuses. The agency declined to comment on the report.

FBI Director Christopher Wray told the Senate Intelligence Committee last month the bureau is investigating dozens of Confucius Institutes, the Chinese-backed language and cultural centers hosted by more than 100 universities across the country. Despite their broad entrenchment in American academics over the past decade, little is known about the nature of the contracts between Beijing and the host universities—funding amounts and contractual terms are largely kept secret.

The U.S. intelligence community has warned of the institutes’ potential to be used as a spying tool. The concern is particularly pressing at the 13 universities that host both Confucius Institutes and top-secret Pentagon research, including Arizona State, Auburn, Purdue, Stanford, and the University of Washington.

Wray said “naiveté” in the academic sector has aggravated the risks, accusing the Chinese government of “exploiting the very open research and development environment that we have” on college campuses.

Last month, Sen. Marco Rubio (R., Fla.), who co-chairs the Congressional-Executive Commission on China, called on the five Florida educational institutions that host Confucius Institutes to end those partnerships amid reports that the Chinese government uses the programs to limit discussion on topics the government finds sensitive, such as the Tiananmen Square Massacre or the political status of Tibet.

“Beijing is becoming increasingly aggressive in its aim to exploit America’s academic freedom to instill in the minds of future leaders a pro-China viewpoint,” Rubio said in a statement to the Washington Free Beacon. “Confucius Institutes across the country and my home state of Florida have given China’s communist regime an avenue to covertly influence public opinion and teach half-truths designed to present Chinese history, government or official policy in the most favorable light.”

Rubio lauded the recent decision by the University of West Florida to cancel its contract with the Chinese-backed organization and encouraged other universities to reconsider their arrangements.

Managed by a division of the Chinese Ministry of Education known as Hanban, Confucius Institutes are a key piece of Beijing’s broader foreign propaganda campaign, which costs the Chinese government an estimated $10 billion annually.

As of 2016, China’s Propaganda Department was spending $6.8 billion per year to “build an international media apparatus that boosts China’s influence,” the CIA says. Chinese state-run media outlets operating in the United States employ individuals who spread communist propaganda, seldom register as foreign agents, and sometimes work on behalf of Beijing’s intelligence services, according to the report.

“The CCP bankrolls several English-media outlets in the U.S. that try to influence perceptions of China and world events,” the report says, citing media accounts. “The CCP also pays some American media firms to publish propaganda without obvious CCP attribution … and harasses or denies visas to journalists who publish stories critical of the regime.”

The veritable institution Mississippi State University trains students in epidemiology, or ‘herd health’. It is funded by the Chinese Academy of Agricultural Sciences. ⁃ TN Editor

Two Mississippi State professors in the university’s College of Veterinary Medicine are reaching out to students around the world who want to learn about their specialized field of epidemiology.

“There is a need for training Chinese veterinarians in epidemiology,” Smith said. Epidemiology is the branch of medicine dealing with the incidence and prevalence of disease in large populations and with detection of the sources and cause of epidemics of infectious disease. It’s also commonly referred to as studying “herd health.”

Both faculty members also travelled to the country last year under a cooperative arrangement from the U.S. Department of Agriculture’s Foreign Agriculture Service and the Chinese Ministry of Agriculture.

“There are some diseases of animals that are important to the economy of farming in the U.S. or to public health. Influenza is a really important one,” said Smith, the Mikell and Mary Cheek Hall Davis Endowed Professor at MSU, who also explained that managing disease is an important issue around the world.

“There are some diseases that we’ve managed to control in the U.S. that are still problems in China and in other Asian countries, and the USDA believes that identifying and controlling particular diseases in these countries helps protect animal and public health in the U.S.,” Smith said. Interestingly, epidemiology is not taught as part of regular veterinary training in China, he added.

“There is wide recognition of the value for veterinary epidemiology training in China to improve the safety of food, improve the well-being of animals by preventing diseases, and protecting public health by reducing human exposure to zoonotic diseases,” Smith said.

Smith and Wills hope to see the new relationships formed with the Chinese continue to grow. Their students were graduates of veterinary schools in China who are now doing additional graduate work through the Chinese Academy of Agricultural Sciences.

“The students were very excited to visit with us and to speak English. They were full of questions and very positive about interacting with Americans. They also were very attentive to the course,” Smith said.

In addition to the nearly 40 students officially enrolled in the class, more students not earning credit also sat in to learn from the MSU visiting faculty members.

Smith and Wills have a few long-term goals for the Chinese teaching project.

“We hope to go back again, and it sounds like the Chinese are interested in having us do that. We also would like to have some of the good students come here and spend some time doing graduate research at Mississippi State,” Smith said.

“Maybe they would return to China and become teachers. The idea is that we are training the trainers of epidemiology in the future,” he said.