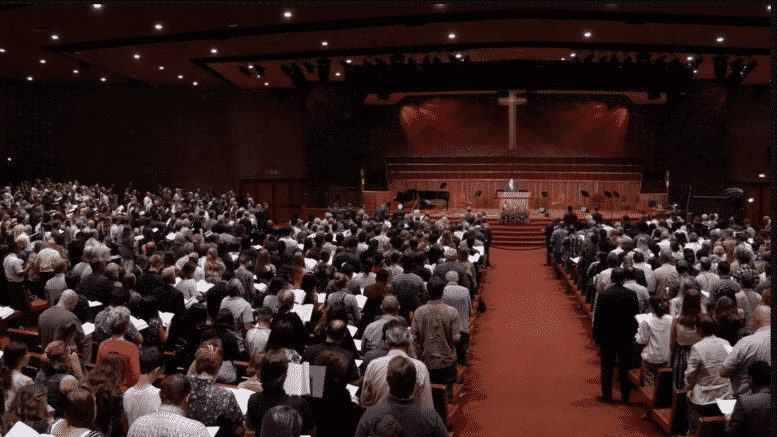 Many government officials in California are virulently anti-Christian and sought to use the pandemic as a way to destroy churches and break up congregations. Pastor John MacArthur fought back and thus far has successfully repelled each attack. COVID tyrants are relentless, however, and continue to harass and attack. ⁃ TN Editor

Both Gov. Gavin Newsom (D-Calif.) and the County of Los Angeles have health orders prohibiting indoor church services. Grace Community Church (GCC) and Pastor John MacArthur have challenged those orders in court while continuing to meet in person, and LA County has tried — no fewer than four times — to convince judges to issue restraining orders preventing the congregation from gathering to worship God in church. On Tuesday, a California judge again denied the county’s legal shenanigans, noting that the health order remains in place. If LA County wants to punish GCC for meeting in person, it cannot shift responsibility to the courts.

LA County could just enforce its existing health order, which imposes a fine of $1,000 and jail time on offenders. Instead, it has sought court orders. The county has asked a judge to find MacArthur and GCC in contempt of court, which would cost the church more than $20,000 and attorney’s fees. That effort failed, but a judge just rejected yet another attempt to secure a court restraining order against GCC.

“As I said to the court yesterday, trying four times to get a court order just to seek huge contempt fines and possibly jail time for Pastor MacArthur shows clearly that LA County is simply trying to target the church and impose punitive and outrageous sanctions,” Jenna Ellis, one of MacArthur’s lawyers and a personal lawyer to President Donald Trump, told PJ Media on Tuesday.

“Nothing about this is truly about health. It’s an unconstitutional power grab,” Ellis added.

LA County had requested a temporary restraining order (TRO) from the court and California Superior Court Judge Mitchell Beckloff rejected its application on Tuesday. Beckloff issued a blunt five-page order, noting that “in the absence of new law or circumstances [LA County does] not overcome the statutory prerequisites set forth for reconsideration of orders and renewal of motions. Thus, the court has no authority to take the action requested by [the county]. On this basis, [the county’s] renewed application for a TRO is denied.”

The judge did not rule on the underlying health orders which lie at the center of a GCC lawsuit against Gov. Newsom. However, Beckloff did deny the county’s most recent effort to slap even higher fines on GCC and John MacArthur.

“The court correctly concluded that Los Angeles County’s renewed application for a temporary restraining order was both procedurally and substantively defective,” Thomas More Society Special Counsel Paul Jonna, another of the lawyers on the case, explained in a statement. “This was their fourth unsuccessful attempt to obtain a court order prohibiting indoor worship services at Grace Community Church. We look forward to fully vindicating our clients’ constitutionally protected rights in subsequent proceedings for this important case.”

“We are very grateful to Judge Beckloff for his reasoned opinion and for taking great care to review this very important matter,” John MacArthur said in a statement. “As I said in my declaration to the court, we see this action against us as an illegitimate misuse of power. It should shock the conscience of every Christian that churches are coming under assault from our own government simply for holding church. Church is essential.”

You go get ‘um McArthur!!!! I agree. It’s a power grab, completely unconstitutional and goes right along with the covid lie tyranny of the predatory class who is pushing the world monetary system into failure for strictly personal purposes–enslavement.

I stand behind the right to freedom of religion as set down by the Law of Our Land. AND I’m NOT a Christian, Pastor McArthur!!!

And even after thousands n thousands of years of abuse, millions still flock to these churches, like the millions that believe our government. Since Judgment has begun on the house of God (churches/congregations), according to 1 Peter 4:17, Satan has taken his seat in the temple (churches/congregations), according to 2 Thessalonians 2:3,4, and many more woes to come in Isaiah to Malachi (especially Jeremiah 25 and Ezekiel 9), because they have changed the laws of God to please themselves/the people, for the love of money, reminds me of how the governments have changed the rules to make mucho more money… Read more »