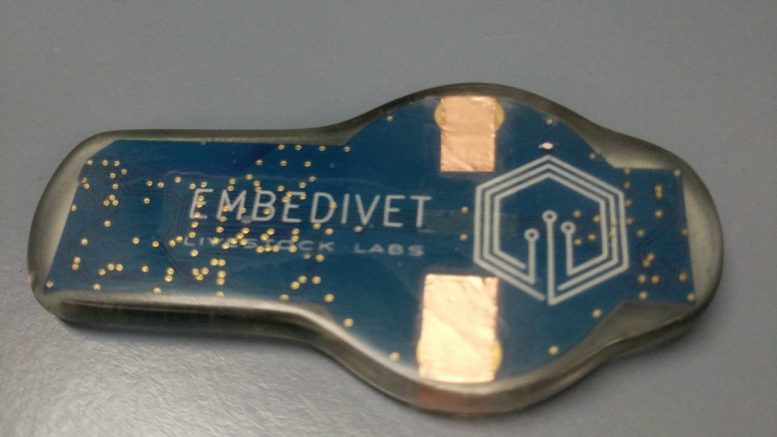 When humans revealed that they were not interested in voluntary implants, this Technocrat inventor turned to animals instead. When the technology is perfected and thoroughly tested, it undoubtedly will return to human testing an application. ⁃ TN Editor

Somewhere on a dairy farm in Wellsville, Utah, are three cyborg cows, indistinguishable from the rest of the herd.

Just like the other cows, they eat, drink, and chew their cud. Occasionally, they walk over to a big, spinning red-and-black brush, suspended at bovine back height, for a scratch. But while the rest of the cows just get their scratch and move on, these cows deliver data. Trackers implanted in their bodies use low-energy Bluetooth to ping a nearby base station and transfer information about the cows’ chewing frequency, temperature, and general rambling around the farm.

These cows are the first to try a device called EmbediVet, created by a startup named Livestock Labs. For now, they’re just going about their normal lives, unintentionally providing data that helps train an artificial neural network. The hope is that in the near future, this AI will help farmers figure out quickly and easily how well cows and other livestock are eating, whether they’re getting sick or about to give birth—things that are typically done today just by watching and waiting but are difficult to spot when you’ve got hundreds or thousands of animals to keep an eye on.

Embedded RFID sensors and other trackers have long been used in livestock, though generally just for identifying each animal. There are already some behavior-tracking wearables out there, such as collars, that use sensors to pinpoint events like cud-chewing and illness. But Livestock Labs claims that once EmbediVet is implanted—currently in a surgical procedure done under local anesthetic—it’s less annoying to the cow than a wearable and, potentially, a more powerful way to collect useful data and spot bovine behavior patterns over time.

This subcutaneous tracker actually had a human tryout before it even got anywhere near a cow. And its creator hopes to eventually bring the cow-tested technology back under your skin.

Tried in humans, retooled for cattle

Livestock Labs CEO Tim Cannon never set out to make what is, in essence, an embedded Fitbit for cows. What he really wanted was to use the same technology to reengineer himself, and anyone else who wanted to do likewise.

Cannon, a software developer and biohacker, took his first plunge into surgically upgrading himself in 2010 after seeing a video of a Scottish biohacker named Lepht Anonym talking about the sensations produced by a magnet she implanted in her finger. Shortly thereafter, he got his own finger magnet and cofounded Grindhouse Wetware, a biohacking startup in Pittsburgh that focuses on designing and building implantable electronics.

For years at Grindhouse, Cannon and his team made several sensors, including a device called Circadia, which included a thermometer and LED lights that glowed from beneath the skin.

Cannon hoped Circadia could collect data and work with AI software he built to start predicting illnesses. And in 2013, after about a year of work and $2,000 in development costs, he had a Circadia sensor surgically implanted into his arm.

“When we did this, we were actually trying to throw down a glove to the medical industry, to technological fields, to say, ‘Look, if a bunch of idiots in a basement can do this while smoking joints and listening to Wu Tang, what the fuck is the problem?’” Cannon says.

The problem, it seems, is that beyond a small community of hackers, grinders, and curious observers, most people just aren’t interested in having things implanted in their bodies, especially if these things aren’t medically necessary.