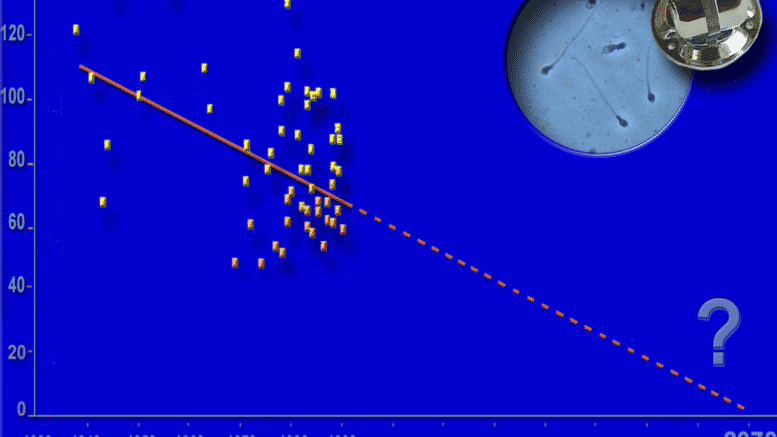 Please Share This Story!
PDF 📄
As a virus, COVID is causing many unexpected effects in human biology, most of which were initially vehemently denied; brain/neurological damage, paralysis, internal organ function, etc. However, the attack on mail sperm may be the most concerning issue.

Before COVID, global population was already in decline with birth rates falling like a rock. Now is it reported that  COVID is damaging testicular function and pushing birth rates even lower. ⁃ TN Editor

Just when you thought the future couldn’t get much more dystopian, scientists have issued more stark warnings that COVID-19 is reducing fertility in men, and could contribute to depopulation of the planet.

Scientists say that there is increasing evidence in patients of testicular damage and lower sperm counts and mobility, with initial studies revealing the presence of the virus in semen samples.

Researchers at the Justus-Liebig-University in Germany. along with scientists from Allameh Tabataba’i University in Iran have reported  significant inflammation markers in samples of testicular tissue from 84 Covid-19 patients.

They discovered that the inflammation and cellular stress were twice as severe in the Covid-19 positive group as in a control group.

Researchers also noted that sperm was three times slower in COVID patients, and sperm count in general was much lower.

The study found that sperm concentration was reduced by 516 per cent, mobility by 209 per cent and sperm cell shape was altered by 400 per cent.

The researchers further noted that this represents oligoasthenoteratozoospermia, one of the most common causes of subfertility in men.

“Although these effects tended to improve over time, they remained significantly and abnormally higher in the Covid-19 patients, and the magnitude of these changes were also related to disease severity,” Maleki further warned.

In addition, Researchers from the Huazhong University of Science and Technology in Wuhan (yes, that Wuhan) have issued a call for a long term study into the effects of the virus on male fertility.

“We propose that there is an urgent need to track male Covid-19 patients during their recovery,” microbiologist Yu Tian and reproductive biologist Li-quan Zhou noted.

Previous studies have pointed toward a correlation between the virus and reduced fertility.

Last year a Miami University study found that COVID-19 can invade tissues in the testicles and  impair sperm function.

In January a review of studies published in the journal Open Biology warned that COVID posses a “global threat to male fertility potential.”

I believe the depopulation issue and birth rates falling have nothing to do with the fake Covid. Is it not highly possible with all the drug use legal and illegal, alcoholism, genetically modified foods, chem trails, sexually transmitted diseases in which they claim 4 in 10 have, also vaccines, and we must not eliminate that fact that God withholds people from having children as the Bible says. God told man kind to go and populate the earth, and evil men and women want to kill them, this is all from Satan the enemy of mankind. Satan especially hates God’s people.

Well; what would you think if a large microwave was put into the atmosphere in the form of 5G do you think it won’t affect your physical situation?

I always that the the low sperm count, was from GMO’s. If covid is lowering it too, then we shouldn’t see so many woman (as I do), having babies. I think I should go look at statistics for the answer, perhaps.

Minor error: “However, the attack on [men’s] sperm may be the most concerning issue.”

”with initial studies revealing the presence of the virus in semen samples”
How do they identify this so called virus in sperm, when they have NOT ISOLATED a virus to identify it? .