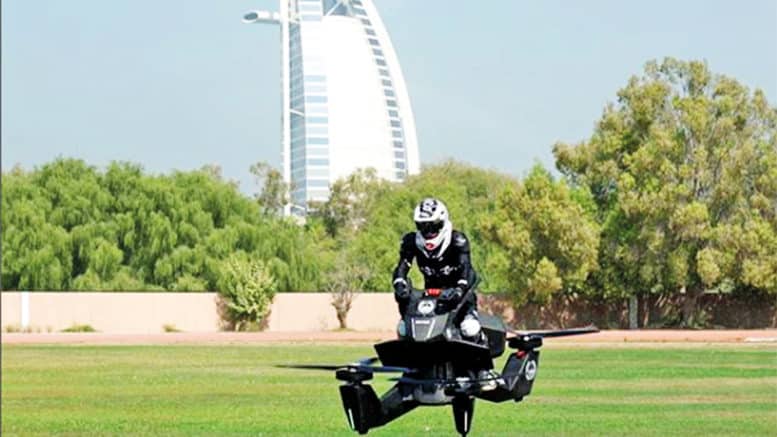 Please Share This Story!
PDF 📄
Dubai aspires to Technocracy by automating everything with technology. They were the first to introduce robocops on patrol. Dubai also leads the Islamic world in Fintech products and implementations. ⁃ TN Editor

Dubai Police have started training two officers on flying motorcycles with a view to introducing the vehicles into service by 2020, according to a tweet by the Dubai Media Office on Friday.

The futuristic step forward in policing was confirmed by Brigadier Khalid Nasser Al Razooqi, director of the Artificial Intelligence Department at Dubai Police, who said the hoverbike will be used in policing work across the city.

“We have two crews already training to use the hoverbike and we will increase the number. The vehicle will be used by 2020 in first-responder roles because of its ability to access hard-to-reach locations,” Brigadier Al Razooqi told Gulf News.

The new crime-fighting “hoverbike” was part of the remarkable display of advanced technology unveiled by Dubai Police at the Gitex Technology Week 2018.

“It works on electricity and can fly at five metres height and carry a policeman during emergency situations and heavy traffic. The bike can also fly without a passenger and can go up to 96km/h. It can fly for 25 minutes with a pilot and for 40 minutes when controlled by an operator,” Brigadier Al Razooqi said earlier in Gitex week.

The insane policies and means of the police state technocrats aren’t realizable unless their dreams are given form by their minions. For a paycheck and a pension, the mind-bot Engineer Class allow their work to be appropriated and applied for control rather than open sourcing that contributes to mass creativity and thus personal and social freedom. The “mad scientists” create because it gives them personal power via status within Scientism and its obsequiousness to the authoritarian power structure, i.e., the Ruling Class. If I’m recalling accurately, a Technocracy News mantra is, “They create because they can.” implying a complete lack… Read more »