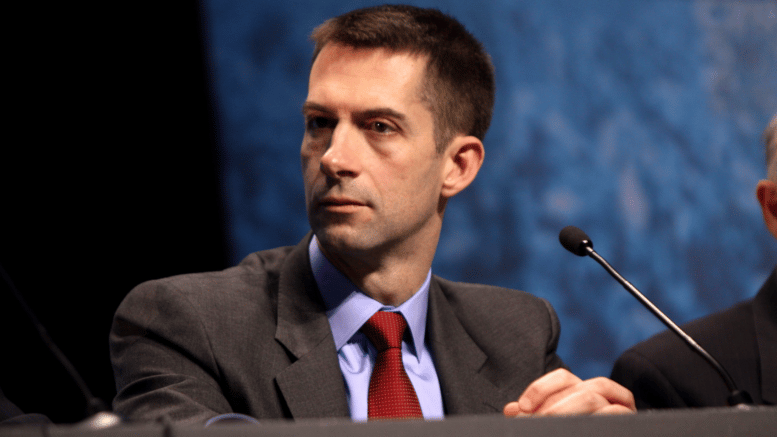 ESG is a policy sledgehammer designed to kill oil, gas and coal production throughout the world. It is the cornerstone of the WEF’s Great Reset and the UN’s Sustainable Development, aka Technocracy. As traditional sources of energy are curtailed, the predictable outcome of shortages is price increases. Finally, a prominent figure in the political arena has made this connection and is speaking out in public forums. Is anyone listening?

Sen. Tom Cotton (R-AR) is calling for investigation and is asking pointed questions: Have ESG-promoting companies bonded together to form a cartel in order to destroy competition for their own products?  Have they broken anti-trust laws?

This is certainly not a mountain of resistance, but if Sen. Cotton continues to speak up, others might catch the vision that America is being systematically deconstructed by the green mob.

Cotton: We Need to Investigate ESG ‘Climate Cartel’ ‘Contributing to $5 a Gallon Gas’

[Breitbart] On Thursday’s broadcast of CNBC’s “Squawk Box,” Sen. Tom Cotton (R-AR) vowed to investigate ESG practices by “climate cartel” groups like BlackRock that are “contributing to $5 a gallon gas” “so a lot of fancy investment bankers can feel good about themselves” and “think they drive an electric car when really they’re driving a coal-powered car as opposed to a gas-powered car.”

Cotton stated, “[W]hat Larry Fink and BlackRock have done, in part through collusion with this Climate Action Partnership, is essentially create a climate cartel. They are trying to suppress investment in the fossil fuel industry in America. And I know you have a lot of CEOs and investors who watch. I would just say this, if you’re thinking about joining this climate cartel, you better think again, and you better lawyer up. There’s a reason why America’s top law firms are already advising their clients to be wary here, because this is contributing to $5 a gallon gas and when Republicans take charge in November, I’m going to make sure that the Congress is investigating these matters. This is almost certainly a breach of these firms’ fiduciary duties, probably a civil violation of anti-trust laws, … and very possibly a criminal violation.” Read full story here…

Clean technology is not very clean at all. Everything including terminology is upside down.