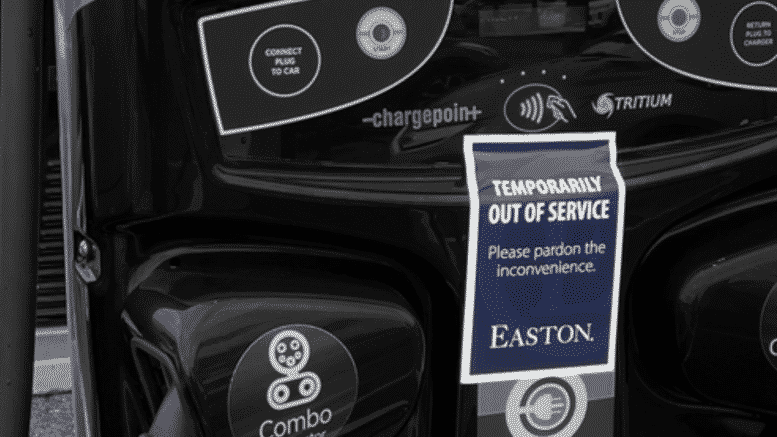 Please Share This Story!
PDF 📄
The EV industry is going to hit a brick wall as energy prices soar amidst shortages of energy and disrepair of charging stations. EV charging stations are headed toward the fate of many windmill farms, where as many as 75 percent of the giant towers are stationary. Remember that Technocrat Elon Musk is largely responsible for inventing the EV industry with Tesla. ⁃ TN Editor

California’s bold move toward an EV revolution and eliminating the sale of gasoline- and diesel-powered vehicles by 2035 have hit a snag in the liberal utopian city of San Francisco.

A recent report by David Rempel of the University of California at Berkeley found a quarter of all EV charging stations in the Bay Area were out of order, suggesting current infrastructure isn’t ready for the giant leap toward an electrified world.

Here’s a section of the study describing the poor infrastructure for EVs across the Bay Area:

In order to achieve a rapid transition to electric vehicle driving, a highly reliable and easy to use charging infrastructure is critical to building confidence as consumers shift from using familiar gas vehicles to unfamiliar electric vehicles … This study evaluated the functionality of the charging system for 657 EVSE (electric vehicle service equipment) CCS connectors (combined charging system) on all 181 open, public DCFC (direct current fast chargers) charging stations in the Greater Bay Area. An EVSE was evaluated as functional if it charged an EV for 2 minutes or was charging an EV at the time the station was evaluated. Overall, 72.5% of the 657 EVSEs were functional. The cable was too short to reach the EV inlet for 4.9% of the EVSEs. Causes of 22.7% of EVSEs that were non-functioning were unresponsive or unavailable screens, payment system failures, charge initiation failures, network failures, or broken connectors.

California is the largest auto market in the US and the 10th largest globally. Its aggressive transition to EVs, all in the name of climate change, is hitting road bumps as infrastructure support cracks in at leader one major metro area, and the state’s power grid is unreliable as fossil fuel power plants have been retired too quickly in the transition to unsustainable solar and wind power generations. This has caused a jump in electricity rates for customers who use Pacific Gas & Electric Co., Southern California Edison Co., and San Diego Gas & Electric. Rates are so expensive that charging some EVs in certain parts of the state is almost as much as filling up a vehicle at the gas station.

The incentives for owning an EV in California are diminishing, from faulty infrastructure in San Francisco to extremely high electricity rates in some parts of the state. Not exactly what is needed to instill confidence in increasing EV ownership.

THIS IS LIKE THE STORY OF THREE LITTLE BOYS PEERING THROUGH HOLES IN THE FENCE AT AN ELEPHANT. THIS STUDY IS MUCH TOO SMALL AND TOO GEOGRAPHICALLY LIMITED TO DRAW CONCLUSIONS ABOUT CALIFORNIA. IN SOUTHERN CALIFORNIA, MOST EVSE WORK, AND PRICES ARE GENERALLY ONE-HALF TO ONE-THIRD THAT OF GASOLINE FOR EQUIVALENT MILES. CHARGING AT HOME, WHICH MOST EV OWNERS DO, IS GENERALLY 10% OF EQUIVALENT GASOLINE COSTS. CERTAINLY THE DEMAND ON THE INFRASTRUCTURE WILL EXACERBATE MANY OF THE PROBLEMS, THE SPEED OF TRANSITION WILL CAUSE ISSUES WE DO NOT YET ENVISION, BUT CURRENTLY THESE DEMANDS APPEAR AS A SHORTAGE OF… Read more »