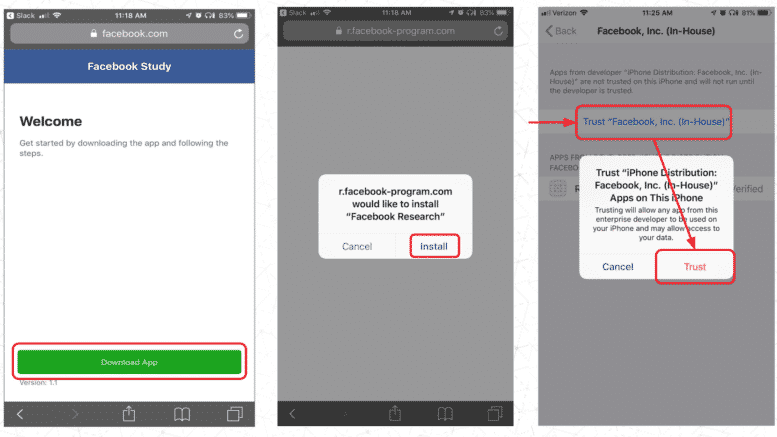 Now Facebook is caught in yet another outrageous data scandal that pays unsuspecting teenagers to install a background app that sucks all data out of their phones: messages, emails, browser histories, phone calls, etc. This may be in violation of both Apple and Android app store regulations. ⁃ TN Editor

Desperate for data on its competitors, Facebook  has been secretly paying people to install a “Facebook Research” VPN that lets the company suck in all of a user’s phone and web activity, similar to Facebook’s Onavo Protect app that Apple banned in June and that was removed in August. Facebook sidesteps the App Store and rewards teenagers and adults to download the Research app and give it root access to network traffic in what may be a violation of Apple policy so the social network can decrypt and analyze their phone activity, a TechCrunch investigation confirms.

Facebook admitted to TechCrunch it was running the Research program to gather data on usage habits, and it has no plans to stop.

Since 2016, Facebook has been paying users ages 13 to 35 up to $20 per month plus referral fees to sell their privacy by installing the iOS or Android “Facebook Research” app. Facebook even asked users to screenshot their Amazon order history page. The program is administered through beta testing services Applause, BetaBound and uTest to cloak Facebook’s involvement, and is referred to in some documentation as “Project Atlas” — a fitting name for Facebook’s effort to map new trends and rivals around the globe.

We asked Guardian Mobile Firewall’s security expert Will Strafach to dig into the Facebook Research app, and he told us that “If Facebook makes full use of the level of access they are given by asking users to install the Certificate, they will have the ability to continuously collect the following types of data: private messages in social media apps, chats from in instant messaging apps – including photos/videos sent to others, emails, web searches, web browsing activity, and even ongoing location information by tapping into the feeds of any location tracking apps you may have installed.” It’s unclear exactly what data Facebook is concerned with, but it gets nearly limitless access to a user’s device once they install the app.

The strategy shows how far Facebook is willing to go and how much it’s willing to pay to protect its dominance — even at the risk of breaking the rules of Apple’s iOS platform on which it depends. Apple could seek to block Facebook from continuing to distribute its Research app, or even revoke it permission to offer employee-only apps, and the situation could further chill relations between the tech giants. Apple’s Tim Cook has repeatedly criticized Facebook’s data collection practices. Facebook disobeying iOS policies to slurp up more information could become a new talking point. TechCrunch has spoken to Apple and it’s aware of the issue, but the company did not provide a statement before press time.

“The fairly technical sounding ‘install our Root Certificate’ step is appalling,” Strafach tells us. “This hands Facebook continuous access to the most sensitive data about you, and most users are going to be unable to reasonably consent to this regardless of any agreement they sign, because there is no good way to articulate just how much power is handed to Facebook when you do this.”

Facebook first got into the data-sniffing business when it acquired Onavo for around $120 million in 2014. The VPN app helped users track and minimize their mobile data plan usage, but also gave Facebook deep analytics about what other apps they were using. Internal documents acquired by Charlie Warzel and Ryan Mac of BuzzFeed News reveal that Facebook was able to leverage Onavo to learn that WhatsApp was sending more than twice as many messages per day as Facebook Messenger. Onavo  allowed Facebook to spot WhatsApp’s meteoric rise and justify paying $19 billion to buy the chat startup in 2014. WhatsApp has since tripled its user base, demonstrating the power of Onavo’s foresight.