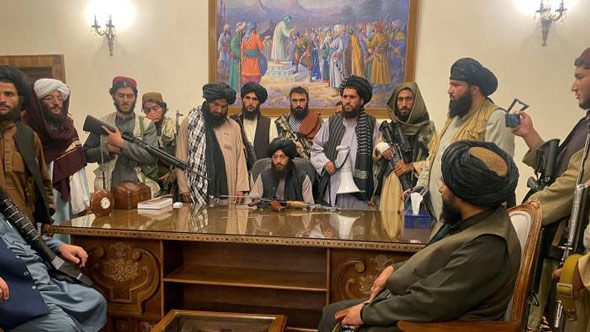 Please Share This Story!
PDF 📄
It is now amply demonstrated that Technocrat tools of total surveillance can be used for unspeakable evil. Afghans who were lured into surveillance systems by U.S. forces are now running for their lives as Taliban soldiers go house-to-house searching for people to kill. ⁃ TN Editor

Thousands of Afghans struggling to ensure the physical safety of their families after the Taliban took control of the country have an additional worry: that biometric databases and their own digital history can be used to track and target them.

U.N. Secretary-General Antonio Guterres has warned of “chilling” curbs on human rights and violations against women and girls, and Amnesty International on Monday said thousands of Afghans – including academics, journalists and activists – were “at serious risk of Taliban reprisals”.

After years of a push to digitise databases in the country, and introduce digital identity cards and biometrics for voting, activists warn these technologies can be used to target and attack vulnerable groups.

“We understand that the Taliban is now likely to have access to various biometric databases and equipment in Afghanistan,” the Human Rights First group wrote on Twitter on Monday.

“This technology is likely to include access to a database with fingerprints and iris scans, and include facial recognition technology,” the group added.

The U.S.-based advocacy group quickly published a Farsi-language version of its guide on how to delete digital history – that it had produced last year for activists in Hong Kong – and also put together a manual on how to evade biometrics.

Tips to bypass facial recognition include looking down, wearing things to obscure facial features, or applying many layers of makeup, the guide said, although fingerprint and iris scans were difficult to bypass.

“With the data, it is much more difficult to hide, obfuscate your and your family’s identities, and the data can also be used to flesh out your contacts and network,” said Welton Chang, chief technology officer at Human Rights First.

It could also be used “to create a new class structure – job applicants would have their bio-data compared to the database, and jobs could be denied on the basis of having connections to the former government or security forces,” he added.

The most “dire circumstance” would be to use the data to target anyone who was involved in the previous government, or worked in an international non-profit, or was a human rights defender, he told the Thomson Reuters Foundation.

Even five years ago, the Taliban was using government biometric systems to target members of the security forces, checking their fingerprints against a database, according to local media reports.

On Monday, just hours after the militants rolled into the capital Kabul, there were fears that this was already happening.

A Kabul resident said in a private message that she had heard of house-to-house inspections, and that the Islamist militants were using a “biometrics machine”.

How is this different than what Big Brother does? Hunting down peaceful protestors by video cams installed everywhere around the Capitol and arresting and imprisoning people without trial now for months, tracing movements and bank accounts to hunt down the Extremist Insurrectionists, by the way the one general called all Libertarians enemies of the state. You know if you’re unvaxxed your medical history prohibits you from employment by law now, but everybody has to Mask forever because their master the Beast is loving it.

Does this remind you all of Benghazi? Who is leading Biden? The same people that is who. https://www.americanthinker.com/articles/2014/05/benghazi_conspiracy_hell_yes.html There are other ways to attack our own military and it to send our enemies against them, and that is what they are doing. Many administrations have given weapons to the enemy Iran Contra is a good example. The talk is now to bring Afghans to American, was not that the plan all along??? Of course it was.

Susan Rice is part of Biden’s inner core and his long-time friend. We will never forget her role in Benghazi.

Yup! She is CFR, on the board of Netflex a great propaganda tool, her dad was governor of Federal Reserve and much more. Our military again is getting duped, led by treasonous generals and politicians connected to the so called ‘enlightened’ ones. This truly reminded me yesterday of the weather underground because some of those people are still involved. Why did it remind me of weather underground because of the fema camps how they said they needed to murder millions, and to re- educate us to think properly. If not they have to be destroyed.

Just sharing for those who do not know: https://www.americanthinker.com/blog/2008/10/eliminating_25_million_america.html I have a question? The civilian army just as powerful just as strong as Obama put it, might be in place? Also, could it be that the busing of the illegals (from all nationalities), some will be used as slave labor maybe for Gates and his other devil worshipper’s, for evil other practices (of which are words I cannot say), and other rich who need laborers, but others are coming from frightening countries who also were used by H…it.ler.’s handlers (algorithm’s in mind) as always evil people do use those of… Read more »

That video no longer exists. If you have a link to a copy that is downloadable or just watchable please post it here. Thanks.

Found it!
‘No Place To Hide’ The Strategy and Tactics of Terrorism (1982) G Ed Griffin Documentary (ugetube.com)

Sharing this because it is important. It began with Kennedy: https://vimeo.com/338863157 This docu., was on You tube but had been taken down of course!

This is something that was taught in the first movie Red Dawn. Not many remember it. Think government mandated gun registration.

Now, after years of the Internet and Social Media coupled with face recognition, it’s to late to hide.

Gee! Ya’ think a weaponized system can be re-weaponized to identify and murder opponents of ‘fill-in-the-blank’. That reality is not that far away for anyone in any country these days.

21,000+ Europeans killed by the “vaccines”; Australia’s truck drivers about to shut the country down; India’s Ivermectin blackout; and more (much more) from SAMIZDAT – NEWS FROM UNDERGROUND