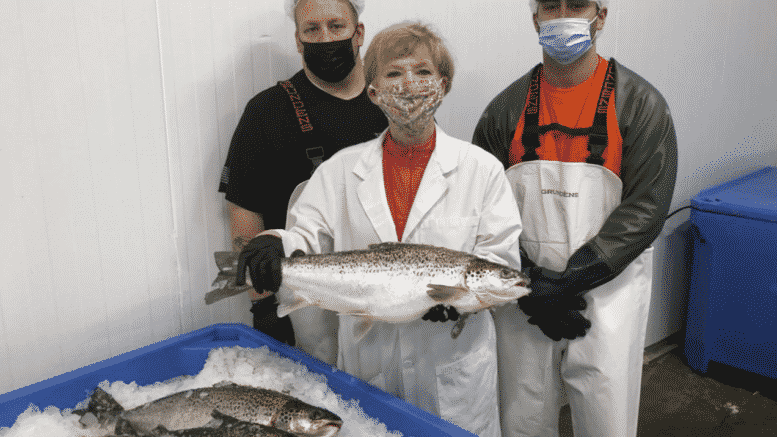 Please Share This Story!
PDF 📄
The FDA approved genetically engineered salmon as “safe and effective” in 2015 but now the land-locked harvest is rolling out to commercial institutions nationwide. Critics have nicknamed the product “Frankenfish”.

Normally, the term GMO, or Genetically Modified Organism, would apply. In this case, the salmon are clearly identified as “genetically engineered” because of extensive DNA editing. It is only a matter of time before they spread to wild fish. ⁃ TN Editor

The inaugural harvest of genetically modified salmon began this week after the pandemic delayed the sale of the first such altered animal to be cleared for human consumption in the United States, company officials said.

Several tons of salmon, engineered by biotech company AquaBounty Technologies Inc., will now head to restaurants and away-from-home dining services — where labeling as genetically engineered is not required — in the Midwest and along the East Coast, company CEO Sylvia Wulf said.

Thus far, the only customer to announce it is selling the salmon is Samuels and Son Seafood, a Philadelphia-based seafood distributor.

AquaBounty has raised its faster-growing salmon at an indoor aquaculture farm in Albany, Indiana. The fish are genetically modified to grow twice as fast as wild salmon, reaching market size — 8 to 12 pounds (3.6 to 5.4 kilograms) — in 18 months rather than 36.

The Massachusetts-based company originally planned to harvest the fish in late 2020. Wulf attributed delays to reduced demand and market price for Atlantic salmon spurred by the pandemic.

“The impact of COVID caused us to rethink our initial timeline … no one was looking for more salmon then,” she said. “We’re very excited about it now. We’ve timed the harvest with the recovery of the economy, and we know that demand is going to continue to increase.”

Although finally making its way to dinner plates, the genetically modified fish has been met by pushback from environmental advocates for years.

The international food service company Aramark in January announced its commitment to not sell such salmon, citing environmental concerns and potential impacts on Indigenous communities that harvest wild salmon.

The announcement followed similar ones by other major food service companies — Compass Group and Sodexo — and many large U.S. grocery retailers, seafood companies and restaurants. Costco, Kroger, Walmart and Whole Foods maintain that they don’t sell genetically modified or cloned salmon and would need to label them as such.

The boycott against AquaBounty salmon has largely come from activists with the Block Corporate Salmon campaign, which aims to protect wild salmon and preserve Indigenous rights to practice sustainable fishing.

“Genetically engineered salmon is a huge threat to any vision of a healthy food system. People need ways to connect with the food they’re eating, so they know where it’s coming from,” said Jon Russell, a member of the campaign and a food justice organizer with Northwest Atlantic Marine Alliance. “These fish are so new — and there’s such a loud group of people who oppose it. That’s a huge red flag to consumers.”

Wulf said she’s confident there’s an appetite for the fish.

“Most of the salmon in this country is imported, and during the pandemic, we couldn’t get products into the market,” Wulf said. “So, having a domestic source of supply that isn’t seasonal like wild salmon and that is produced in a highly-controlled, bio-secure environment is increasingly important to consumers.”

AquaBounty markets the salmon as disease- and antibiotic-free, saying its product comes with a reduced carbon footprint and none of the risk of polluting marine ecosystems like traditional sea-cage farming carries.

The GMO fish will go great with new GMO people.

Are they serving GMO people, too? HA!

You-know, there is a Cannibal Club in CA? Read their website. What a load. Oh yeah, I believe healthy, young people are giving their bodies to be eaten by a bunch of sick, cabalistic humans. Ugh!

I won’t be eating salmon any more, for sure.