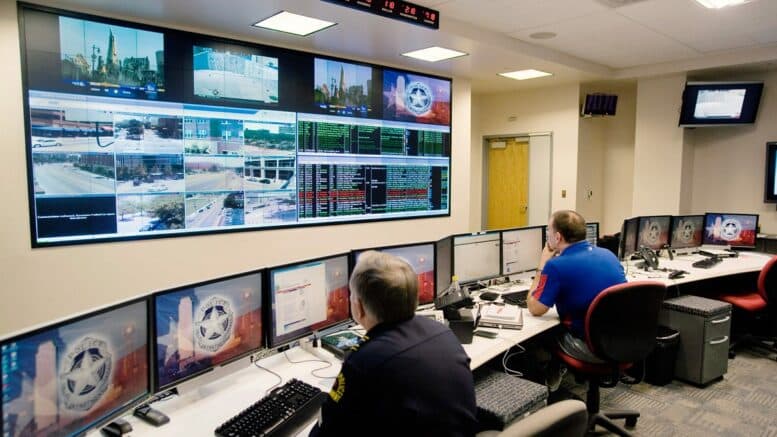 Please Share This Story!
PDF 📄
The national network of local Fusion Centers was created as a data gathering network to normalize state and local data to Federal databases. Instead of fighting terrorism, they have become a spy network on ordinary citizens. ⁃ TN Editor

What has the public learned about Fusion Centers since the recent BlueLeaks hack was released over a month ago? Not a lot.

The Feds have done a great job of keeping the public from finding out what DHS Fusion/Intelligence Centers are really doing. In a country founded on freedom, we find federal and local law enforcement scrambling to keep the true function of Fusion Centers hidden from the public.

By piecing together articles from Maine and Texas newspapers, a disturbing picture begins to unfold of warrantless surveillance of Americans.

The first proof that Fusion Centers were being used to spy on everyday citizens and activists can be found in a Maine Press Herald article from mid-July.

“A cache of internal police documents stolen from a secretive Maine State Police intelligence unit has provided the first substantial glimpse into how it collects and shares information about crime suspects and political activists and, in rare cases, keep tabs on domestic extremists, gang members and anti-government groups.”

The article goes into greater detail describing how local police use Fusion Centers to track down low-level offenders and ID people from social media or video footage.

“Police agencies commonly contact the Maine center with requests for help identifying a person depicted in a photo, sometimes captured from a surveillance camera. Other pictures are taken directly by law enforcement, or appear to be pulled from Facebook or other social media sites.”

Maine police even went so far as to ask the Fusion Center to identify a passenger in a car who refused to identify himself, and did not consent to having his photograph taken or his fingerprints scanned.

Another article in the Maine Press Herald which predated BlueLeaks, revealed that Fusion Centers refuse to acknowledge that they are secretly scanning everyone’s faces and spying on their cellphones.

“Despite evidence that the Maine State Police has worked for years with federal agencies to develop its use of digital surveillance technology, the agency now uses that law to refuse to answer any questions about such efforts, or even acknowledge that they exist.”

“In early June, an intelligence center operated by the Austin Police Department was hacked, along with many others like it across the country. Known as BlueLeaks, the collection of leaked documents from the hack contains over 10 gigs of material taken from the Austin center. They reveal a secret citizen spying program that’s active in the Austin area and across the country.”

“Documents examined by the Chronicle show that each TLO must sign a nondisclosure agreement with ARIC, including those not working in law enforcement, essentially creating secret citizen officers.”

Secret citizen spies or TLOs could be someone you least expect. TLOs could be anyone: “private security officers with local hotels, malls, large venues, and local semiconductor companies. Government employees in “education,” “code enforcement,” and “public works” also contribute to ARIC as FOUO TLOs.

According to the article, TLOs could be teachers, trash collectors, ministers, priests, rabbi’s or even counselors.

Basically DHS has succeeded in creating a network of secret government spies masquerading as everyday people.

A TLOs job is to report people for doing mundane things like asking questions, taking pictures or being observant of one’s surroundings. TLOs are also reporting people for “suspicious” social media posts, whatever that means.

“According to one FOUO TLO’s report, an individual was seen taking photos of Zach Scott’s Topfer Theatre on Sept. 22, 2016. The report includes five different pictures of a young person using a camera on a tripod to photograph the theatre from across the street.”

To make it easier to report Americans for doing mundane things, Fusion Centers have provided TLOs with a checklist.

“The leaked documents include submission forms TLOs use to make their reports. At the top of the forms are boxes to check indicating the type of activity being reported. These include the aforementioned “School Threat,” but also Eliciting Infor­ma­tion, Observation/Surveillance, and Suspicious/Odd Facebook Post. The TLO report spreadsheet contains 128 reports of school threats. But the category most reported by far was Expressed or Implied Threat, with more than a thousand entries.”

To say that this is reminiscent of China, the USSR or East Germany is an understatement. As the Chronicle warned, ‘worrisome examples of suspicious activity have led to increased scrutiny’ which means the Feds and local police could be secretly monitoring innocent Americans without out any public scrutiny.

If you thought DHS’s “If You See Something, Say Something” was a failure guess again. DHS has managed to justify creating 78 Fusion Centers whose sole purpose, it seems, is to spy on innocent Americans and track their daily movements.

“The Feds have done a great job of keeping the public from finding out what DHS Fusion/Intelligence Centers are really doing. In a country founded on freedom, we find federal and local law enforcement scrambling to keep the true function of Fusion Centers hidden from the public.” Ahh, but it is the American people who are to be secure in their privacy, not those who serve within our governments at any level. The constitutionality of a statute depends on the nature of what the statute is intended to protect. A statute making it illegal to reveal national secrets is valid… Read more »

This is a longer video, but the first 10-20 minutes pretty much states what it is about. Then, the rest of it is discussion with the 2 whistle blowers. They talk about what has been done and who is involved and how they are doing it.

Well clearly an untrustworthy government is going to be suspicious of its people. It’s pure projection. But they’ve spent quite a lot of money, time & planning putting this into practice now. Theyve spent quite a lot of time & Money persecuting & terrorising the hero’s who exposed it too. Clearly the government see its own population as the enemy & we didn’t even know. Maybe that actually makes them OUR enemy. How about the rest of the population putting tabs on every politician & bureaucrat who is doing dirty black door deals & other nefarious things….which would be most… Read more »