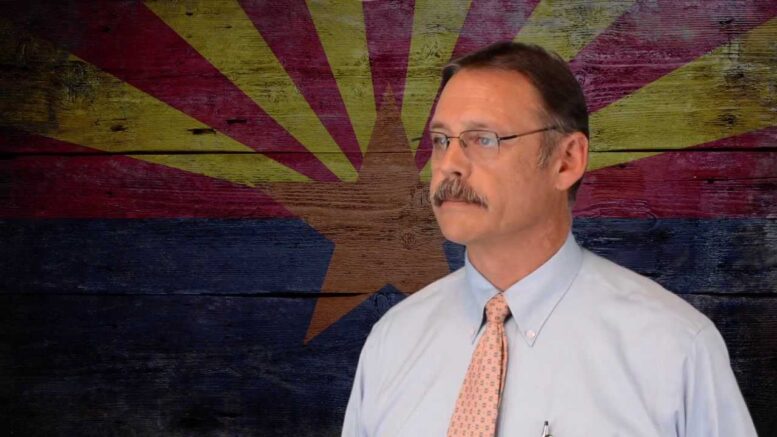 Please Share This Story!
PDF 📄
When the official COVID narrative is challenged, as in Arizona by a duly elected State Representative, the investigators are vilified, ridiculed and marginalized without any serious debate or consideration. ⁃ TN Editor

A Southern Arizona lawmaker is claiming that a new study he commissioned shows that there is no correlation between the rising number of people being infected with COVID-19 and the number who wind up in the hospital.

And Rep. Mark Finchem, R-Oro Valley, is accusing the state health department of withholding the raw numbers that will let he and other lawmakers decide whether the trends being cited by Gov. Doug Ducey to justify his actions are merited.

On Tuesday, Finchem said it is wrong to focus on the rising number of positive test results as a reason to impose restrictions on individual and business activity. He said that fewer than 10 percent of those people who test positive wind up in the hospital.

But former state Health Director Will Humble said the most obvious flaw in the report is that the person who did the analysis — Finchem’s brother, Kirk — did not recognize that there is a delay in the data. What that means, Humble said, is that the claimed downward trend in hospitalizations just is not occurring.

Rep. Finchem said he’s not buying it. In fact, he claims that the data being produced by the health department — what winds up on its daily public “dashboard” that’s also used by Gov. Doug Ducey to support his actions — may be skewed.

“The agency is refusing to release the data to me as a legislator so we can attempt to replicate their work,” he told Capitol Media Services. Instead, Finchem said, what’s produced for public consumption is “the preferred narrative from the agency.”

No one from either the governor’s office or the state health department would comment.

But Humble dismissed the contention that the real numbers are being hidden.

“I find no reason to believe that,” he said, saying there are people at the agency now who were there when he was director, prior to 2015, whose judgment he trusts.

And Humble has not been a defender of the governor, saying that Ducey moved too quickly to lift restrictions in May.

It’s not just Humble who is noticing the delays in reporting and how that affects the numbers — and the conclusions that can be drawn. Joe Gerald, an associate professor at the Zuckerman College of Health at the University of Arizona, concluded in a recent report that it can take time to actually record deaths.

And there’s something else.

Gerald said that the number of people hospitalized with COVID-19 went from a plateau of 1,093 on May 22 — a week after the governor lifted his stay-at-home order — to 4,834.

And Gerald, in his report, said that as of July 10, 3,485 of Arizona’s 7,971 general ward beds were occupied by patients with suspected or confirmed COVID-19 infection, a 16 percent increase from the week before. So there is a trend — toward increased hospitalizations.

Kirk Finchem concedes there are weaknesses in his report.

He said any relationship between tests and hospitalization is masked by the time lag between the two as well as the average duration of hospitalization, all numbers he said he has been unable to get.

Rep. Finchem has accused Gov. Doug Ducey of continuing to overreact to the virus even after the main danger had passed.

Censurship is another preferred form of repression of questions disturbing the dominant technocratic rhetoric. Platforms such as Facebook have become quite active in this respect. Thus for instance fb banned a recent youtube video highlighting the link between masks and globalism (cf. https://youtu.be/6QlIedz9mbY ) . Whatever does not fit the dominant agenda can be nonchalantly banned as “offensive”.

I support Rep Mark Finchem and hope he can pursue the questions concerning the validity of Covid case-counts and resulting hospitalizations for ‘suspected or confirmed’ cases. I have a friend who received letters directed each to his mother and father. Both letters came from his parent’s former, primary care physician. The letters stated that each had tested positive for COVID and to quarantine at home. BOTH PARENTS HAVE BEEN DECEASED FOR EITHER 3 OR + 12 YEARS. So, #1, the healthcare delivery system has been fraught with fraud for decades (since the HMO Act of 1973). If providers can’t receive… Read more »