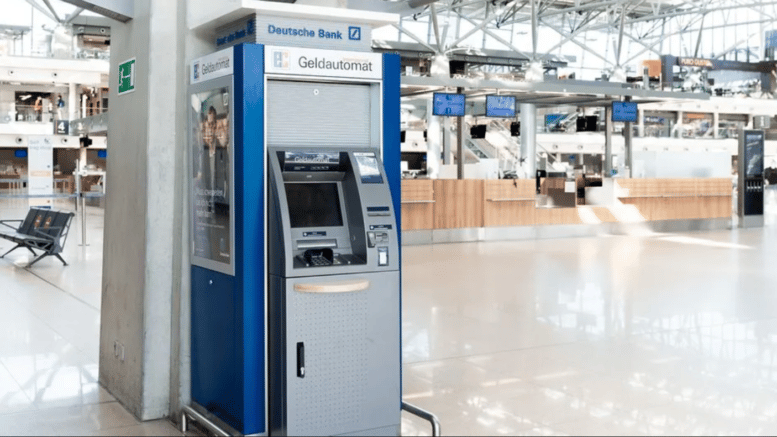 Please Share This Story!
PDF 📄
Germans depend on cash and cash banking machines to get it into their pockets. During a energy blackout, the bank machines don’t work. Now, put two and two together here and figure out just how dangerous and outright destructive climate alarmist energy policies are. Germany could literally be reduced to a “Mad Max” movie scenario within a few days. ⁃ TN Editor

While Europe has been keeping a generally optimistic facade ahead of the coming cold winter, signaling that it has more than enough gas in storage to make up for loss of Russian supply even in a “coldest-case” scenario, behind the scenes Europe’s largest economy is quietly preparing for a worst case scenario which include angry mobs and bank runs should blackouts prevent the population from accessing cash.

As Reuters reports citing four sources, German authorities have stepped up preparations for emergency cash deliveries in case of a blackout (or rather blackouts) to keep the economy running, as the nation braces for possible power cuts arising from the war in Ukraine. The plans include the Bundesbank hoarding extra billions to cope with a surge in demand, as well as “possible limits on withdrawals”, one of the people said. And if you think crypto investors are angry when they can’t access their digital tokens in a bankrupt exchange, just wait until you see a German whose cash has just been locked out.

Officials and banks are looking not only at origination (i.e., money-printing) but also at distribution, discussing for example priority fuel access for cash transporters, according to other sources commenting on preparations that accelerated in recent weeks after Russia throttled gas supplies.

The planning discussions involve the central bank, its financial market regulator BaFin, and multiple financial industry associations, said the Reuters sources most of whom spoke on condition of anonymity about plans that are private and in flux.

Although German authorities have publicly played down the likelihood of a blackout and bank runs – for obvious reasons  – the discussions show both how seriously they take the threat and how they struggle to prepare for potential crippling power outages caused by soaring energy costs or even sabotage. They also underscore the widening ramifications of the Ukraine war for Germany, which has for decades relied on affordable Russian energy and now faces double-digit inflation and a threat of disruption from fuel and energy shortages.

As everyone familiar with the recent history of the Weimar Republic Germany knows, access to cash is of special concern for Germans, who value the security and anonymity it offers, and who tend to use it more than other Europeans, with some still hoarding Deutschmarks replaced by euros more than two decades ago.

According to a recent Bundesbank study, roughly 60% of everyday German purchases are paid in cash, and Germans, on average, withdrew more than 6,600 euros annually chiefly from cash machines.

And here is the punchline: a parliamentary report a decade ago warned of “discontent” and “aggressive altercations” in case citizens were unable to get their hands on cash in a blackout. Translation: in case of cash withdrawal halts, German society may very well tear itself apart.

Indeed, there was a rush for cash at the beginning of the pandemic in March 2020, when Germans withdrew 20 billion more euros than they deposited. That was a record, and it worked generally without a hitch.  But a potential blackout raises new questions about possible scenarios, and officials are intensively revisiting the issue as the energy crisis in Europe’s largest economy deepens and winter nears. 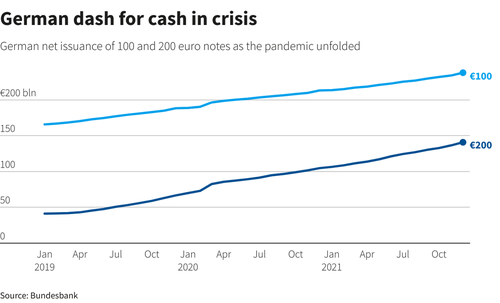 If a blackout struck, one option for policymakers could be to limit the amount of cash individuals withdraw, said one of the people. Needless to say, that would be a very bad option for Germany, and for fiat in general (after all, if the FTX bankruptcy is a black eye for crypto, what can one say about fiat if one of the world’s most advanced economies limits access to cash). The Bundesbank processes cash moving through Germany’s shops and economy, removing fakes and keeping circulation orderly. Its massive stocks make it ready for any spike in demand, that person said.

One weakness that planning exposed involves security firms that transport money from the central bank to ATMs and banks. The industry, which includes Brinks and Loomis is not fully covered by law guiding priority access to fuel and telecommunications during a blackout, according to the industry organization BDGW.

“There are big loopholes,” said Andreas Paulick, BDGW director. Armoured vehicles would have to line up at petrol stations like everyone else, he said. The organization hosted a meeting last week with central bank officials and lawmakers to press its case.

“We must preventively tackle the realistic scenario of a blackout,” Paulick said. “It would be totally naive to not talk about this at a time like now.”

How bad could it get? Well, more than 40% of Germans fear a blackout in the next six months, according to a survey last week published by Funke Mediengruppe. And since at least one blackout is virtually assured in the coming months, that means a stampede for the nearest ATM, something the local financial infrastructure will unlikely be able to handle.

As a result, Germany’s disaster office said it recommended people keep cash at home for such emergencies (surely this will inspire confidence).

Meanwhile, another Reuters source notes that German financial regulators worry that banks are not fully prepared for major power outages and view it as a new, previously unforeseen risk. Banks consider a full-scale blackout “improbable”, according to Deutsche Kreditwirtschaft, the financial sector’s umbrella organization. But banks nevertheless are “in contact with the relevant ministries and authorities” to plan for such a scenario, especially since anything banks say is “improbable” tends to happen rather regularly. It said finance should be considered as critical infrastructure if energy is rationed.

At times politics can get in the way of blackout planning. In Frankfurt, Germany’s banking capital, one city council member proposed requiring it to present a blackout plan by Nov. 17. The politician, Markus Fuchs of the right-wing AfD party, told the council it would be irresponsible not to plan for one. But the other parties rejected the proposal, accusing Fuchs and his party of inciting panic.

Fuchs later said in a phone interview: “If we found a solution for world peace, it would be rejected.” The issue also underscores the dependence of commerce on technology, with transactions increasingly electronic, and where most cash machines have no emergency power source.

Cash would be the only official payment method that would still work, said Thomas Leitert, chief of KomRe, a company that advises cities on planning for blackouts and other catastrophes.

“How else will the ravioli cans and candles be paid for?” Leitert said. Well, there is that whole crypto thing, but the 2nd biggest Democratic donor did a bang up job there…

Germany Preparing For Bank Runs Ahead Of Winter Power Cuts