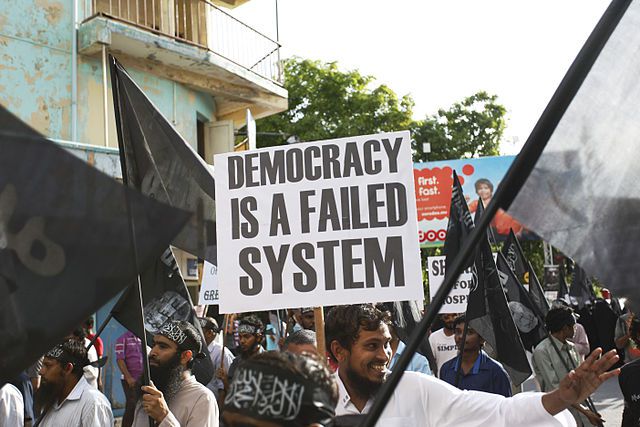 As I predicted in Goodbye Democracy, Hello Technocracy, the calls for the demise of democracy are increasing, paving the way for ‘rule by experts.’ Technocrats have total disdain for the Constitution, political representation and politicians, and thus do not even acknowledge its existence, calling us a Democracy instead.  ⁃ TN Editor

The US has been downgraded to a “flawed democracy” from a “full democracy” by the Economist Intelligence Unit in its 2016 “Democracy Index” report.

Although the report’s publication comes shortly after the election of President Donald Trump, the EIU analysts write that the US was not downgraded because of him. Rather, they argue, his surprise election was an effect of the underlying causes that led the EIU to downgrade the US.

According to the EIU, “full democracies” are countries in which basic political freedoms and civil liberties are respected, and are “underpinned by a political culture conducive to the flourishing of democracy.” The government functions satisfactorily; media are independent and diverse; the judiciary is independent and their decisions are enforced; and there’s an effective system of checks and balances.

Meanwhile, “flawed democracies” have free and fair elections (with possibly some issues such as infringements on media freedom) and respect basic civil liberties. However, there are governance problems and low levels of political participation.

The US’s overall “Democracy Index” score fell from 8.05 in 2015 to 7.98 in 2016 — just below the EIU’s threshold of 8.00 for a “full democracy.” The analysts write that a key factor in the drop was Americans’ growing distrust in governmental institutions.

“Popular trust in government, elected representatives, and political parties has fallen to extremely low levels in the US. This has been a long-term trend and one that preceded the election of Mr. Trump as the US president in November 2016,” they write.

“By tapping a deep strain of political disaffection with the functioning of democracy, Mr. Trump became a beneficiary of the low esteem in which US voters hold their government, elected representatives, and political parties, but he was not responsible for a problem that has had a long gestation.”

Notably, they write that even if 2016 weren’t an election year, the US’s score would’ve dipped below 8.00.

“Democracy” vs. constitutional republic, which is what we are intended to be. Do they even know the difference? Using that standard, USA is about 4.2. Who does those evaluations- George Soros (Schwartz)?

Some elitists certainly know what a Constitutional Republic is, even if they hate it. The strategy to break us apart has been to summarily declare that we are a Democracy and plant that expectation among the ignorant masses. Once so persuaded, they are easily manipulated for whatever purposes the elitists choose. Yes, people like Soros want to destroy our nation, its borders and its culture.