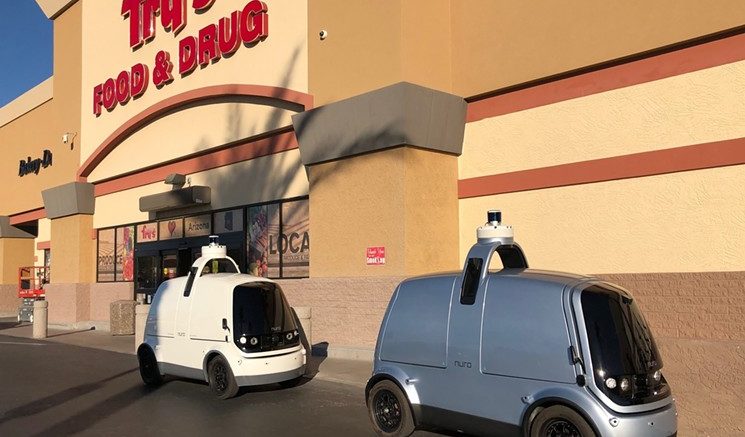 Please Share This Story!
PDF 📄
The next step in the automated food chain will be for your ‘smart refrigerator’ to automatically order replacement groceries when you run low, and have them auto-delivered by driverless chariots. ⁃ TN Editor

Deliveries from an Arizona grocery store will soon be arriving with no one behind the wheel.

A fully autonomous vehicle is about to pilot public roads Tuesday with no back up driver, though it will be monitored by humans in another automobile.

After almost a thousand test runs with humans aboard modified Prius vehicles, deliveries will be made Tuesday in Scottsdale, Arizona, using the R1, an automobile with no steering wheel and no seats for humans.

The R1, when summoned, will travel within a one-mile radius of the Fry’s Food grocery store just east of the Phoenix Zoo.

It will travel up to 25 miles per hour on residential roads, but stay clear of main roads or highways, according to Pam Giannonatti at Kroger Co., which owns Fry’s.

Kroger has partnered with the tech company Nuro on the project.

“Through this exciting and innovative partnership, we are delivering a great customer experience and advancing Kroger’s commitment to redefine the grocery experience by creating an ecosystem that offers our customers anything, anytime, and anywhere,” said Yael Cosset, Kroger’s chief digital officer.

Attempts to deploy fully autonomous vehicles on public streets have been limited by technological hurdles, as well as human apprehension.

Uber pulled its self-driving cars out of Arizona this year following the death in March of woman who was run over by one of the ride-hailing service’s robotic vehicles while she crossed a darkened street in a Phoenix suburb. It was the first death involving a fully autonomous vehicle.

That vehicle had a backup driver at the wheel.

Waymo, a self-driving car spinoff from a Google project, has been offering free rides in robotic vehicles with no human back-up driver as part of a test program in the Phoenix year for the past year. Earlier this month, Waymo launched a ride-hailing service available to about 200 people that will have a human behind the wheel to take control in case something goes awry.

Giannonatti said safety is paramount in this next step of autonomous vehicle technology.