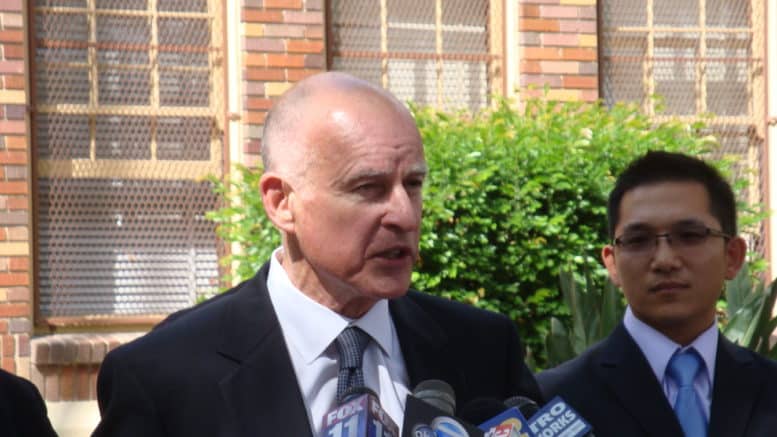 California rate-payers will soon understand the insanity of their state leadership’s drive to kill carbon. California is rich in oil and natural gas resources which has adequately powered the state for many decades. Gov. Brown intends to scrap that entire infrastructure in return for an economically unsound system of ‘renewables.’ ⁃ TN Editor

Ahead of a summit this week meant to galvanize regional action on climate change, Gov. Jerry Brown on Monday signed legislation that would put California on the path to eliminating fossil fuels from its energy sector.

Senate Bill 100 speeds up the state’s timeline for moving to renewable energy sources like solar and wind, and requires that all retail electricity be carbon-free by 2045. California is the second state to adopt such a goal, after Hawaii.

“It’s not going to be easy. It will not be immediate. But it must be done,” Brown said at a signing ceremony in Sacramento. “California is committed to doing whatever is necessary to meet the existential threat of climate change.”

The measure is a symbolic strike against the Trump administration, which has pulled back from United States efforts to confront climate change by withdrawing from an international accord to reduce greenhouse gas emissions, loosening fuel economy standards and weakening rules to reduce pollution from coal-fired power plants.

“Today California sends an unmistakable message to the nation and the world: Regardless of who occupies the White House, California will always lead on climate change,” state Sen. Kevin de León, a Los Angeles Democrat who carried SB 100, said.

The bill was initially introduced last year, but stalled in the Legislature amid heavy resistance from electric utilities, oil companies and labor unions. Opponents argued that SB 100 would not make a substantial difference to global emissions as the planet continues to warm, while harming workers in fossil fuel industries and raising electricity prices for consumers.

With the backing of political heavyweights like former Gov. Arnold Schwarzenegger and former Vice President Al Gore, it finally won approval from lawmakers late last month. Supporters noted that the state’s largest utilities have already surpassed a mandate to generate a third of their electricity from renewable sources by 2020, while most other retail sellers are on track.

SB 100 increases to 60 percent, from 50 percent, how much of California’s electricity portfolio must come from renewables by 2030. It establishes a further goal to have an electric grid that is entirely powered by clean energy by 2045, which could include other carbon-free sources, like nuclear power, that are not renewable.

Brown has focused in his final years in office on making California a worldwide leader on climate policy. He has previously supported efforts to reduce the state’s greenhouse gas emissions to 40 percent below 1990 levels by 2030, and to shore up the cap-and-trade system that requires polluters to buy permits for their emissions.

The Global Climate Action Summit, which he will host later this week in San Francisco, was organized to encourage regional bodies, such as cities and states, to step up their own efforts to fight climate change where national governments have failed to act.

At the SB 100 signing ceremony, Brown also announced an executive order directing California to achieve carbon neutrality, meaning it would remove as much carbon dioxide from the atmosphere as it emits, also by 2045. The state has previously committed to reducing greenhouse gas emissions to 80 percent below 1990 levels by 2050.