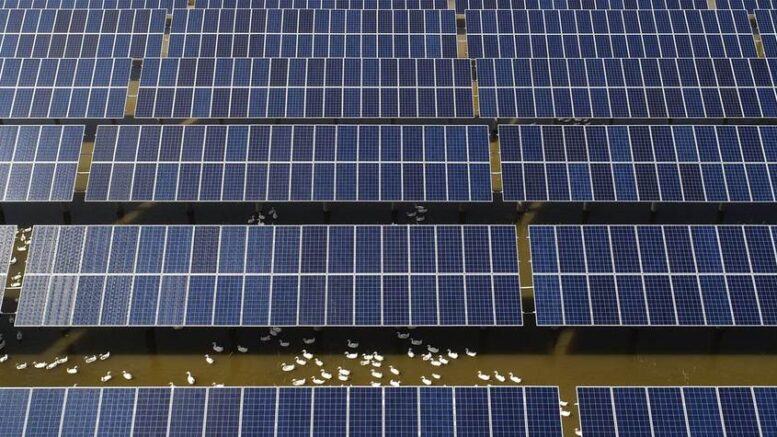 Please Share This Story!
PDF 📄
With the global energy crisis raging, more national leaders are discovering the root cause, namely, greenwashing radicals who have promoted disruptive alternative energy sources like wind and solar, at the expense of destroying existing sources of cheap energy such as coal, oil and natural gas. The trend is begrudgingly reversing as energy shortages threaten economic depression. ⁃ TN Editor

As President Joe Biden waxes poetic about the amazing “transition” his energy policies will affect, the green fervor in Europe is flailing. Former German Chancellor Angela Merkel led the charge in Europe. She did such a good job that Spiegel International called electricity a luxury good in 2013. Germany paid the highest electricity rates in Europe then, and a renewable energy surcharge was poised to raise them by 20%. German Environment Minister Peter Altmaier provided the following advice for Germans struggling to pay for Merkel’s “project of the century,” Energiewende. The policy project shifted from using nuclear to “green energy,” like wind and solar.

“Join in and start today,” Altmaier writes in the introduction. He then turns to such everyday activities as baking and cooking. “Avoid preheating and utilize residual heat,” Altmaier advises. TV viewers can also save a lot of electricity, albeit at the expense of picture quality. “For instance, you can reduce brightness and contrast,” his booklet suggests.

As we know now, Merkel adopted a ‘not in my backyard” (NIMBY) approach and increased fossil fuel imports from Russia. Her green policies were a primary driver of President Biden lifting the sanctions on the Nord Stream 2 pipeline. Many, including Ukrainian President Volodymyr Zelenskyy, believe Biden caving to Merkel emboldened Russian President Vladimir Putin in his invasion of Ukraine. Food and energy are the underlying causes of most wars, and the current conflict is no exception.

However, the war is causing Germany’s new government to take a hard look at the pro-scarcity green energy policies they have imposed on their population for years. Russia is restricting the flow of natural gas to Europe. Unlike France, which did not kill its nuclear energy capacity, Russia’s restriction hits Germany even harder because President Joe Biden has adopted the same ridiculous NIMBY policies Merkel employed, and the U.S. cannot increase shipments to Germany.

So Germany is firing up coal plants. According to the Wall Street Journal:

Germany will restart coal-fired power plants and offer incentives for companies to curb natural gas consumption, marking a new step in the economic war between Europe and Russia.

Berlin unveiled the measures Sunday after Russia cut gas supplies to Europe last week as it punched back against European sanctions and military support for Ukraine.

The steps, part of a broader strategy initiated after the invasion of Ukraine, aim to reduce gas consumption and divert gas deliveries to storage facilities to ensure that the country has enough reserves to get through the winter.

Meanwhile, it looks like the European Union is trying to kneecap wind, solar, and electric vehicles. According to Rystand Energy:

A potential European Commission (EC) act to classify lithium as a Category 1A reproductive toxin in this year’s fourth quarter could undermine the European Union (EU)’s attempt to create and support a domestic battery materials supply chain. The EU currently relies heavily on imports of lithium to supply its nascent electric vehicle (EV) production sector and the classification may increase its reliance on other regions, at a time when the union is focused on energy security and reducing emissions.

People who question the wisdom of solar and wind power because they are low-density sources have often pointed to the toxicity of materials used in solar panels and batteries. Lithium and cobalt, used in lithium-ion batteries, have both demonstrated toxicity to humans, hence the warnings any time you receive a product containing one. It is also why you cannot dispose of them in a landfill. Mining rare earth metals is also an environmental mess. Their production appears to be another NIMBY opportunity for Western nations who will not mine them at home, buying them instead from China. Most of the mining and refining of these metals takes place there.

And this is happening while the predator class and their alphabet agencies sit on top of over 1500+ patents in the US Patent Office alone that would go a long way to relieving the world’s energy problems. However, TPTsB will not release any of these because they can’t put a meter on it. Learn who these people really are. They would rather have humanity die than not make a buck. Profit is their god, i.e. kill-shots. We know what happens with energy inventions that actually work. The usual suspects send a task force to intimidate and sometimes eliminate those inventors… Read more »