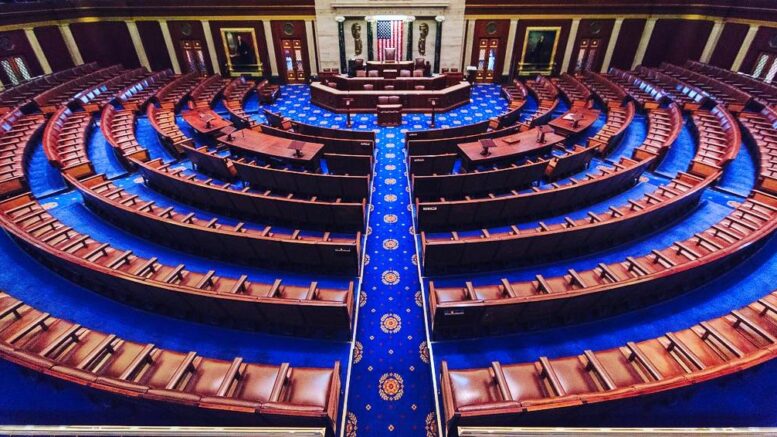 Please Share This Story!
PDF 📄
The Green New Deal doesn’t just belong to radical greens and Democrats, but also to the Republicans. Climate alarmists have successfully changed the political narrative into one of finding the best ways to limit carbon and Republicans are eating it up. ⁃ TN Editor

The COVID-19 pandemic has impacted the lives of every American. More than 118,000 people have died in the U.S. due to the coronavirus and over 45 million Americans have filed for unemployment assistance. Communities have shut down entirely, and while officials are following public health guidelines to safely reopen, getting to a new normal will take time.

And as the pandemic ravages health and economies worldwide, the International Energy Agency reports that global energy emissions may decline this year by almost 8 percent – the largest reduction ever and “twice as large as the combined total of all previous reductions since the end of World War II.”

Still, even with the pandemic driving major economic devastation and emissions declines, global emissions barely met the United Nations’ target of cutting annual emissions by 7.6 percent. And, of course, developed countries like the United States are supposed to cut an even larger share, while the world allows China to continue to increase its emissions without consequence for the next decade.

Simply put, even though the arbitrary U.N. climate standards may have been temporarily met in theory, it took pushing the global economy to the brink of collapse and jeopardizing the livelihoods of millions of Americans to do so.

Unprecedented pandemics require a robust response, which is why Congress has passed the largest relief package in U.S. history to provide aid to American small business owners, workers, seniors and families.

Unfortunately, some Democrats say COVID-19 is “a dress rehearsal for addressing the catastrophic impacts of climate change.” We agree, but it doesn’t have to be this way.

This financial devastation is a preview of Democrats’ Green New Deal that is supposed to give us a socialist, emission-free utopia. For Republicans in Congress, the answer to addressing climate change and bringing our country back to prosperity is clear: American innovation.

The Democrats have made clear the direction their party is headed. Their presumptive nominee for president, former Vice President Joe Biden, recently said in his climate platform that “our environment and our economy are completely and totally connected,” but added that, “the Green New Deal is a crucial framework for meeting the climate challenges we face.”

While we agree the U.S. needs to utilize clean energy, lower emissions, update infrastructure, and work with our allies for a cleaner world, we vehemently disagree that shutting down our economy is the way to do it.

It’s no coincidence that the same communities that have borne the brunt of the COVID-19 pandemic are the ones that have suffered most because the economic devastation it has caused.

Democrats are creating a false choice between combatting climate change and having a prosperous economy. We can have both, and America can supply the innovative technologies that will reduce global emissions. With millions of Americans already losing their jobs, we must find a better way to leave our world better than we found it.

According to the Department of Energy’s Office of Fossil Energy, the use of these credits could create 4.3 million to 6.1 million more jobs. Just recently the Internal Revenue Service released guidance to help implement these tax credits, and now American innovators have even more incentive to utilize these technologies.

The best carbon capture utilization and storage technologies on the planet are the plants that are starving from historically low levels of atmospheric carbon dioxide.

At 400 ppm, the concentration is highest in millions of years.

Exactly! Last I checked, CO2 was “plant food”… essential for all trees and plants. In simple terms, they breathe in CO2 and give off oxygen. If it was even possible to drastically reduce (or eliminate) CO2 from our atmosphere, the entire web of life on planet earth would collapse! When we hear the incessant use of the term, “global warming” bandied around, it’s either by people knowingly pushing the UN Agenda, or their unwitting accomplices. The bottom line is that the globalists pushing this agenda couldn’t care less about the environment! They are simply utilizing the fear of global warming… Read more »

Since when is expanding useless and expensive activities going to be a boon for any economy?

Once you do the math and system engineering, if you insist on eliminating CO2 emissions from energy production, the only remaining thing that will work is nuclear power. http://vandyke.mynetgear.com/Nuclear.html