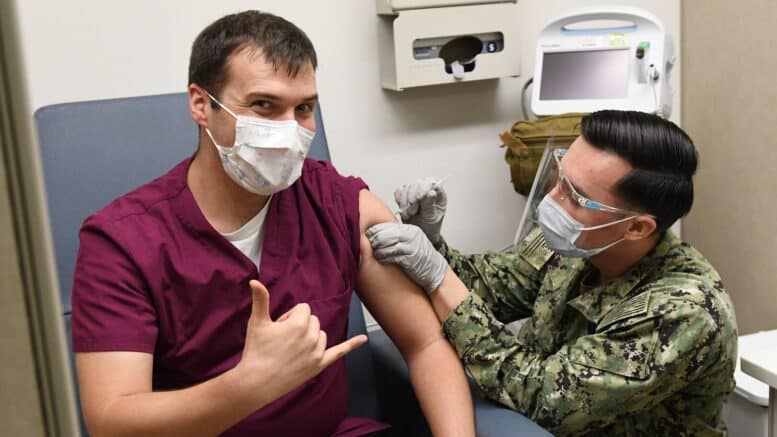 Please Share This Story!
PDF 📄
What’s one more shot on top of 17 other required inoculation? Biden has institutionalized a conveyor belt for continuous invention/adaptation of mRNA “vaccines” for every conceivable virus that might come our way. Hacking the human body and genome risks decimating our military might and needlessly harming our young men and women who voluntarily choose to serve. ⁃ TN Editor

Members of the U.S. military will be required to get the COVID-19 vaccine beginning next month under a plan laid out by the Pentagon Monday and endorsed by President Joe Biden. In memos distributed to all troops, top Pentagon leaders said the vaccine is a necessary step to maintain military readiness.

“I will seek the president’s approval to make the vaccines mandatory no later than mid-September, or immediately upon” licensure by the Food and Drug Administration “whichever comes first,” Austin said in his memo, warning them to prepare for the requirement.

The Pentagon plan provides time for the FDA to give final approval to the Pfizer vaccine, which is expected early next month. Without that formal approval, Austin needs a waiver from Biden to make the shots mandatory, and Biden has already made clear he supports it.

Austin’s decision reflects similar moves by governments and companies around the world, as nations struggle with the highly contagious delta variant that has sent new U.S. cases, hospitalizations and deaths surging to heights not seen since last winter. The concerns are especially acute in the military, where service members live and work closely together in barracks and on ships, increasing the risks of rapid spreading. Any large virus outbreak in the military could affect America’s ability to defend itself in any security crisis.

Austin warned that if infection rates rise and potentially affect military readiness, “I will not hesitate to act sooner or recommend a different course to the President if l feel the need to do so. To defend this Nation, we need a healthy and ready force.”

In a statement Monday, Biden said he strongly supports Austin’s message to the force and the plan to add the COVID vaccine “to the list of required vaccinations for our service members not later than mid-September.”

Biden said the country is still on a wartime footing and “being vaccinated will enable our service members to stay healthy, to better protect their families, and to ensure that our force is ready to operate anywhere in the world.”

Austin’s memo, which went out Monday, was followed quickly by one from Army Gen. Mark Milley, chairman of the Joint Chiefs of Staff.

“The Secretary of Defense intends to mandate vaccinations for all Service members in the coming weeks,” said Milley, adding that the military’s medical professionals recommended the move. At the bottom of his message, Milley scrawled a handwritten note: “Getting vaccinated against COVID-19 is a key force protection and readiness issue.”

The decision comes a bit more than a week after Biden told defense officials to develop a plan requiring troops to get shots as part of a broader campaign to increase vaccinations in the federal workforce.

More broadly, the COVID-19 crisis has worsened around the country, with hospitals experiencing deeper strain in unvaccinated areas of the South. Mississippi reported that 35 medical centers are completely out of intensive care unit beds, Arkansas topped its pandemic record for COVID admissions, and the average number of people hospitalized nationwide has returned to levels not seen since February. More patients are being parked in emergency rooms while they wait for beds to open up and the average number of daily deaths is now above 500.

The country is averaging about 108,000 new infections and 700,000 vaccines administered a day.

Austin said the military services will have the next few weeks to prepare, determine how many vaccines they need, and how this mandate will be implemented. The additional time, however, also is a nod to the bitter political divide over the vaccine and the knowledge that making it mandatory will likely trigger opposition from vaccine opponents across state and federal governments, Congress and the American population.

Pentagon spokesman John Kirby said Monday that he believes the military has enough vaccines to meet the requirements. He added, “You can consider this memo not just a warning order to the services but to the troops themselves.”

“Some may try and criticize the Secretary’s decision, using anti-vax arguments that are not supported by facts or science to politicize the conversation. These desperate attention seekers must be ignored,” said Rep. Adam Smith, D-Wash., chairman of the House Armed Services Committee. Rep. Mike Rogers, R-Ala., said the vaccine will help protect troops who live in cramped conditions and don’t have the option to telework.

Rep. Mark Green, R-Tenn., however, said Austin should not mandate a vaccine that doesn’t have full FDA approval. “Wearing our country’s uniform does not mean our service members sign away the right to make personal medical decisions,” he said.

The decision will add the COVID-19 vaccine to a list of other inoculations that service members are already required to get. Depending on their location, service members can get as many as 17 different vaccines.

This is a total attack on the security of our country. He is not making ready our military he is murdering some and disabling others. The real agenda is a global military controlled by the UN and what better way than to destroy our existing military and making the military a hostile environment in which young men and women will not want to join. It is time for people to wake up and understand our country has been sold out to the UN. Join withdrawun.substack.com to help us support HR7806 (Get the US out of the UN and all affiliate… Read more »

No doubt here that some folks are loving the covid vaccine holocaust. It appears to me that no other drug or vaccine is needed to destroy the humane immune system, any other system of the body or any organs of the body. I think the human genetic code has been cracked. Not to extend life or to eliminate diseases. But to do the exact opposite. America is certainly not first with American despots being in power. I heard yesterday from former Governor of North Carolina, Pat McCrory that Republicans and Democrats were benefactors of the FTX crypto pond scheme. Glad… Read more »

As with everything else that one does not like/agree with……DO something about it and/or ‘change the channel’! If one is NOT in the military…..SIMPLE…..do NOT JOIN! If one is IN the military, say ‘NO!’, and make them boot you out (for a future lawsuit). And what will be left in THE GLOBALISTS’ military (it stopped being the US Military back when Barry Davis [aka Obama] occupied the WH!), are nothing but Anti-American, Sickly (health-wise) Wokies. And I have no problem with THAT! Since those Zombies are not long for this world. Those SANE AMERICANS who DID get booted out…..well, then….I… Read more »

High command? No. High treason. They are destroying the armed forces before the big global take-down. The armed forces should revolt as one and take down the criminal junta class.

And look at this poor fellow, the police have been sent to shut down his little business to punish him for not complying with “mandates”.

Hacking the genome? They’re witch doctors.
They couldn’t create a blade of grass out of thin air and make it reproduce. But these witch doctors, they are already fallen gods run amok, desperate to prove their command over nature. They have no command.

High Command: mRNA Fake Vaccines To Be Required For Military - All View News

[…] High Command: mRNA “Vaccines” To Be Required For Military […]

“In memos distributed to all troops, top Pentagon leaders said the vaccine is a necessary step to maintain military readiness.” One day soon, an ordinary-looking vehicle will pull up to a US military base and transmit a specific group of signals. Most of the troops on the base will collapse and die instantly. The bad guys will roll thru the gate and have complete possession of the base for *their* troops — that will be rolling thru the gate in minutes. The “military readiness” fedgov is planning for: The readiness for troops to die on command. The pentagon and executive… Read more »