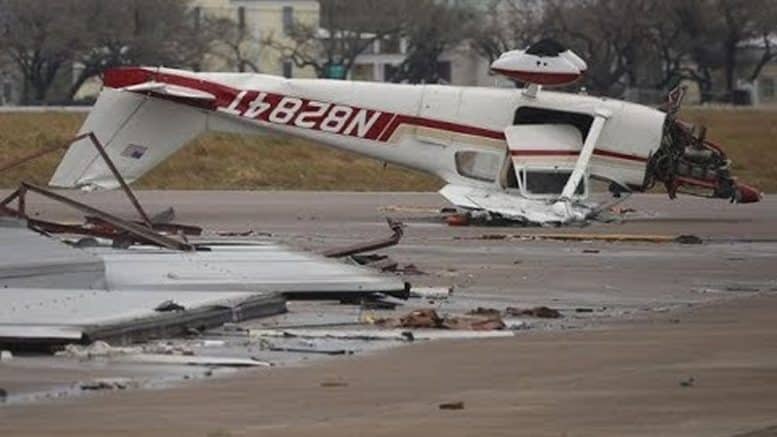 Global warming religionists are already blaming recent hurricanes on a heating planet, even though they have no shred of evidence to that effect. Technocracy is a much a religion as it is a social engineering system. This article sets the record straight. ⁃ TN Editor

“Harvey Is What Climate Change Looks Like: It’s time to open our eyes and prepare for the world that’s coming.” That August 28 Politico article by Slate weatherman Eric Holthaus was one of many trying too hard to blame the hurricane and/or flood on climate change.

Such stories are typically infused with smug arrogance. Their authors claim to be wise and well-informed, and anyone who dares to question their “settled science” must need to have their eyes pried open and their mouths shut.

There will doubtless be similar “retroactive forecasting” tales about Irma, so recent story-telling about Harvey may provide a precautionary warning for the unwary.

I am an economist, not a climatologist.* But blaming Harvey on climate change apparently demands much lower standards of logic and evidence than economists would dare describe as serious arguments.

Atlantic’s climate journalist said, “Harvey is unprecedented—just the kind of weird weather that scientists expect to see more of as the planet warms.” But Harvey’s maximum rainfall of 51.88 inches barely exceeded that from Tropical Storm Amelia in 1978 (48”) and Hurricane Easy in 1950 (45”). And what about Tropical Storm Claudette in 1979, which put down 42 inches in 24 hours near Houston (Harvey took three days to do that)? In such cases, attributing today’s extreme weather to “climate change” regardless of what happens (maybe droughts, maybe floods) is what the philosopher Karl Popper called “pseudoscience.” If some theory explains everything, it can’t be tested and it is therefore not science. (Popper’s favorite examples of pseudoscience were communism and psychoanalysis.)

Seemingly plausible efforts to connect Harvey to climate change are precariously based on another unusual event in 2015–16, not long-term climate trends. In the Atlantic, Robinson Meyer wrote that “Harvey benefitted from unusually toasty waters in the Gulf of Mexico. As the storm roared toward Houston last week, sea-surface waters near Texas rose to between 2.7 and 7.2 degrees Fahrenheit above average.” Thank you, 2015–16 El Nino.

Meyer’s source is a single unsourced sentence from “Climate Signals beta” from the Rockefeller Foundation’s “Climate Nexus” project run by Hunter Cutting (“a veteran political director who develops communications strategy”). Perhaps it would be wiser to consult the National Hurricane Center about Gulf temperatures, which shows they are averaging about one degree (F) above the baseline.

Looking back at any unpredicted weather anomaly, “fact-checking” journalists can always count on Michael Mann and Kevin Trenberth to spin some tale explaining why any bad weather (but never good weather!) must surely be at least aggravated by long-term global climate trends. “It’s a fact: climate change made Hurricane Harvey more deadly,” writes Michael Mann. Gulf sea surface temperatures have increased from about 86 degrees to 87 “over the past few decades,” he says, causing “3–5% more moisture in the atmosphere.” He neglected to point out other compensatory things he surely knows, like that the same climate science predicts a more stable tropical atmosphere, reducing the upward motion necessary for hurricanes.

Even The Washington Post’s esteemed Jason Samenow got onto shaky ground, writing that “rainfall may have been enhanced by 6 percent or so, or a few inches.” It would have been nice if he noted that Harvey’s maximum observed rainfall of 51.88 inches is statistically indistinguishable from the aforementioned Amelia’s 48, forty years ago.

In either case, to blame the Gulf’s temperature and moisture in August 2017 on a sustained global increase in water temperatures requires more than theory or “confidence” (faith). It requires evidence.

As it happens, sea surface temperatures (SSTs) were not rising significantly, if at all, during the years between the two super-strong El Ninos of 1997–98 and 2015–16. On the contrary, a January 2017 survey of four major data sources finds that “since 1998, all datasets show a slowdown of SST increase compared with the 1983–1998 period.” That may sound as if SST had been increasing rapidly before 1998, but that too is unclear: “Prior to 1998, the temperature changes in Global, Pacific, and Southern Oceans show large discrepancies among [four leading estimates], hindering a robust detection of both regional and global OHC [ocean heat content] changes.”

From 1998 to 2012, the evidence on sea surface temperatures becomes even more inconvenient. Two of the four studies show “weak warming” near the surface while the other two show “cooling, coincident with the global surface temperature slowdown [emphasis added].” In other words, the embarrassingly prolonged 1997–2014 pause or “hiatus” in global warming is also apparent in oceanic surface temperatures, not just land and atmospheric temperatures.

Keep in mind what the vaunted “climate change consensus” means. By averaging four estimates, NASA declares “Globally-averaged temperatures in 2016 were 1.78 degrees Fahrenheit (0.99 degrees Celsius) warmer than the mid-20th century mean.” The underlying yearly estimates are deviations from that mid-century meanؙ—“anomalies” rather than actual temperatures.

To convert anomalies into degrees NASA had to use computer models to add anomalies to temperatures in the base period, 1951–80, where the data are hardly perfect. As a result, “For the global mean,” NASA explains, “the most trusted models produce a value of roughly 14°C, i.e. 57.2°F, but it may easily be anywhere between 56 and 58°Fand regionally, let alone locally, the situation is even worse.”

It might be rude to notice the range of error between 56 and 58°F globally (“let alone locally”) is larger than NASA’s supposed increase of 1.78 degrees over many decades. Note too that NASA’s ostensibly cooler base period, 1951–80, includes the second and third biggest floods in U.S. history.

My main point here is simple: Weather is highly variable. There’s a great deal of noise in hurricane and flood data, and it is impossible to attribute a single hurricane or a flood to the slight rise in temperature. Yes, warmer ocean temperatures would logically seem to correlate with more or stronger hurricanes, but as shown below, they don’t. 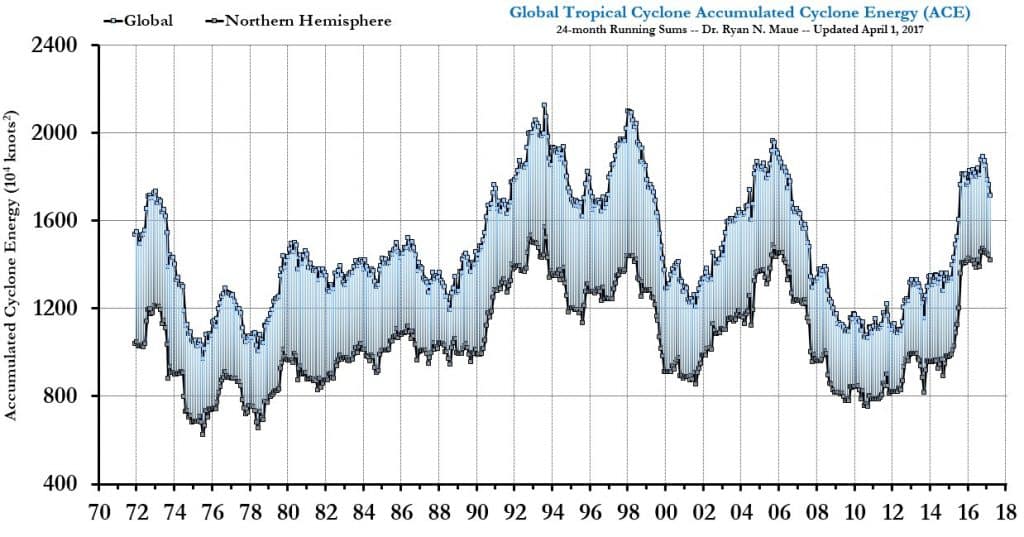 So true. I found this really good list of extreme weather events from history. From before we burned fossil fuels. http://gobeyondnews.com/331/huge-list-of-extreme-weather-before-man-made-co2/