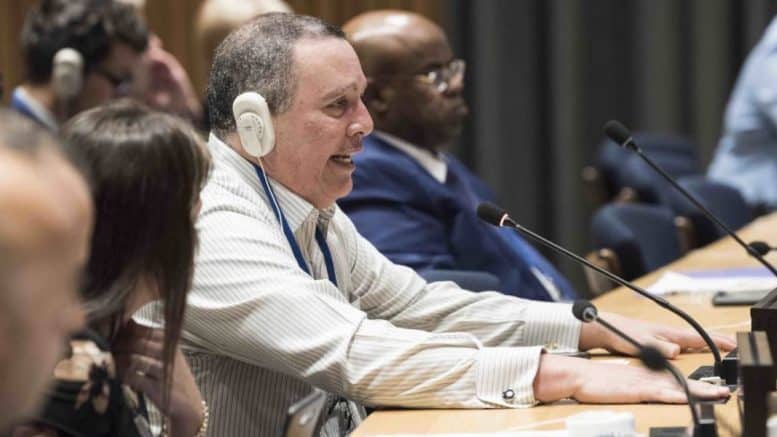 U.N members rejected the formation of a new ‘supra’ organization that would control the New Urban Agenda, but a the same time pushed the Agenda way forward. The rise of the global city is upon us, and the meme will be dominated by Technocracy. ⁃ TN Editor

National governments this week made clear that they are not interested in the creation of a new U. N. body to coordinate global action on sustainable urbanization. But the “UN Urban” proposal was not all that was on the table at the high-level meeting here.

The focus of this week’s talks was how to reform UN-Habitat, the international body’s lead agency on urbanization — specifically, looking at recommendations offered in an August report from a panel appointed by U. N. Secretary-General António Guterres. The report aims to provide fresh energy to the New Urban Agenda, a global urbanization strategy adopted last year, and thus offers a host of new strategies for global action.

Over the course of two days this week, countries revealed their stance toward these proposals, which cover areas such as UN-Habitat’s governance and how to finance the U. N.’s urban portfolio.

“Member states are united in ensuring an effective and efficient contribution from UN-Habitat and the overall U. N. system to the advancement of sustainable urbanization,” said General Assembly President Peter Thomson as the meeting wrapped up Wednesday.

While no decisions were made at the talks, the attitudes expressed here will inform higher-stakes talks slated to start in October, when a committee of the U. N. General Assembly begins its annual session. Here are a half-dozen storylines to watch as this process goes forward.

Many had pinned their hopes on last year’s Habitat III conference, which approved the New Urban Agenda, to elevate the global profile of urban issues — especially at the United Nations, where cities have not traditionally been viewed as a main actor in the development sphere. Now that may finally be changing.

“Today, we acknowledge that the U. N. is not delivering sufficiently in cities. And through our common effort, we will rectify this,” said Deputy Secretary-General Amina J. Mohammed in her opening remarks this week.

“The proud history of urban work at the U. N. must be harnessed at this vital time,” she added, “and the U. N. must be seen again as the lead convener and catalyzer for partners, funders, private sector and civil society organizations to scale up their work in urban areas.”

With that kind of acknowledgment from the U. N.’s second-in-command, it seems that the role of cities in the U. N.’s portfolio has indeed received renewed emphasis.

2. Acceptance of the New Urban Agenda

For the first several months after the New Urban Agenda was adopted, the voluntary agreement appeared to languish in a kind of political limbo. Countries seemed uninterested in moving forward with the strategy, focused instead on the twin pillars of the U. N.’s agenda: the Paris Agreement on climate change and the Sustainable Development Goals.

But this week’s meeting was the first U. N. General Assembly summit dedicated to the New Urban Agenda since it was adopted, and thus an opportunity for a more nuanced discussion. And indeed, the tone has clearly changed, suggesting an across-the-board belief that the New Urban Agenda is essential to delivering on the U. N.’s global plan to fight poverty and limit carbon emissions.

[See: Is there any hope of aligning the many efforts working on the SDGs?]

“The goals contained in the 2030 Agenda [the SDGs] will not be achieved without serious attention to the urban question,” said one French diplomat. The Zambian delegation echoed that sentiment, saying, “The New Urban Agenda cannot be implemented in isolation, but within a harmonized strategic framework with the Agenda 2030, the SDGs and other international protocols.”

Currently there are 58 countries on UN-Habitat’s oversight board, which is called the Governing Council. It meets every two years at the agency’s headquarters in Nairobi. During negotiations on the New Urban Agenda, a bloc of developing countries called for all nations to have representation on the council — what they called “universal membership.” The idea here was to strengthen UN-Habitat’s political clout — and its flagging funding.

While the New Urban Agenda did not go so far as to grant that wish, the recent report did suggest taking such a step by rebranding the Governing Council as the “Urban Assembly” — with all 193 member states invited. This week, the idea was lauded by some. “It can potentially allow UN-Habitat to broaden and strengthen its partnerships,” said Singaporean Ambassador Burhan Gafoor. “This in turn can help UN-Habitat to improve its resource mobilization from all funding sources, both public and private.”

UN-Habitat’s neighbour at the U. N. complex in Nairobi already embarked on a similar path. The U. N. Environment Programme went to universal membership a half-decade ago, christening the biennial event as the Environment Assembly — ostensibly far more than a mere board meeting. This week, some member states drew a correlation between this move and subsequent increased funding for UNEP, although others disputed that analysis.

Read the article to see…

5. A global fund for sustainable urbanization

6. What kind of work should UN-Habitat do, anyway?