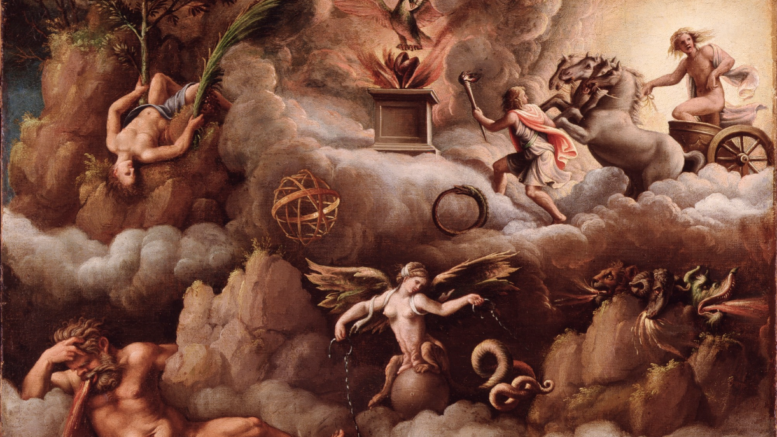 The Allegory of Immortality by Giulio Romano, c. 1540, Detroit Institute of Arts

Please Share This Story!
PDF 📄
Scientists who fall victim to the religion of Scientism immediately join the quest to achieve godhood by conquering death and becoming immortal. This is Transhumanism and it is a false proposition that will never happen. ⁃ TN Editor

The super-rich will soon be able to “live forever” thanks to sophisticated scientific breakthroughs effectively bringing about the end of death, experts believe.

Speaking to Daily Star Online, futurologist and former Labour MP Dr Ian Pearson said that the next few decades will see the blurring of lines between humans and machines.

He argued that such technology is already here to some degree, with retina implants and microchips, but the coming years will see that technology take a massive leap forwards.

“Think of it as like adding an extension to the brain, similar to adding a conservatory to a house,” he said.

Dr Pearson believes that by the 2050s, we will have achieved what he calls “electronic immortality”.

This will enable those with the means to afford it the ability to extend their minds into something resembling The Cloud.

Such a development could open up remarkable opportunities, including, Dr Pearson says, “telepathic communication”.

Describing what this could look like, he explained: “Microscopic implants measuring just millimetres across could be inserted, linking up to our brains.”

This would also see humans able to communicate across the world, by transmitting our brains via something like The Cloud to another vessel, such as a cloned human body, on the other side of the world.

Although this incredibly sophisticated technology is likely to be restricted to the super-rich for the foreseeable future, Dr Pearson believes that “by 2060, this could become more mainstream”.

He added that it is most likely our brains would be transferred into Westworld-like robots.

“There would be no need for human cloning, we can create Westworld-style androids with rigid skeletons,” he said.

“These would have muscle-like fibres grown to human flesh, and they would be 10-15 times stronger than human muscle.”

This may sound straight out of science fiction, but Dr Pearson believes that such a human android could be produced as soon as 2050.

“You would need to create high-resolution silicon masks — and this technology will be here in the next 30 years,” he added.

In fact, he is so confident in the development of androids, he believes that we could even hire them out if we wanted to experience life in another body for a week or so.

“You could even get to live as a pet cat if the android was created,” he said.

And as it is appointed unto men once to die, but after this the judgment: So Christ was once offered to bear the sins of many; and unto them that look for him shall he appear the second time without sin unto salvation. Hebrews 9:27-28. O Timothy, keep that which is committed to ty trust, avoiding profane and vain babblings, and oppositions of so called: 1 Timothy 6:20

I guess I can’t edit this post but 2 words were left out. “O Timothy, keep that which is committed to thy trust, avoiding profane and vain babblings, and oppositions of SCIENEC FALSLEY so called: 1 Timothy 6:20

And …… Why would we want to create androids that are 15 to 20 times stronger than normal? Would this be instituted for all people or …. only for the soldiers of dictatorial governments? And what would these soldiers do after leaving the army? ….. Oh, they wouldn’t leave the army!
We are Borg,
Resistance is futile,
You Will be assimilated,

Yah, sounds like there is no escape from death doesn’t it? One thing is for sure cyborgs/robots have no soul. If these people who think they can freeze their body until science catches up they are horribly mistaken. When a person dies their soul leaves their body and goes to one place or another (heaven or hell). So also is cloning. They think they can clone themselves but they cannot transfer their spirit into the clone, and neither can they transfer their spirit into a computer. Science believes that all a person is is in their brain, and again they… Read more »