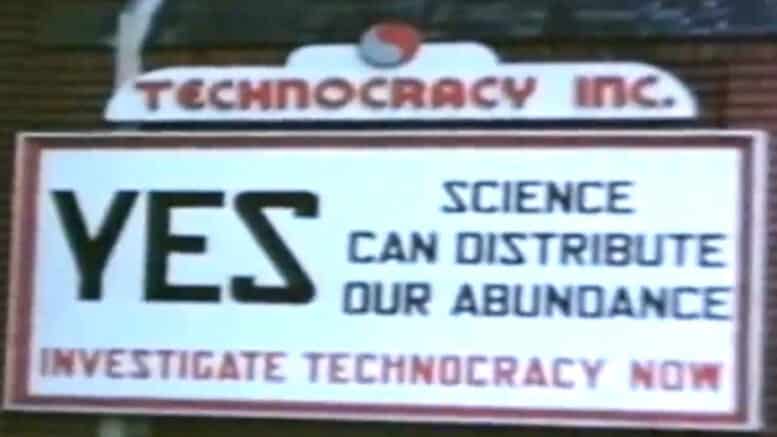 Please Share This Story!
PDF 📄
In a historically and very accurate accurate description of the 1930s Technocracy movement, the author concludes,  “it would be wrong to dismiss Technocracy Incorporated as just another failed utopian scheme”.

The level of meticulous detail in this article shows the author’s deep understanding of Technocracy, its history and its claims. He sees the modern attraction of libertarian thinking among technocrats and acknowledges the growth or Technocracy while alluding to Technopopulism: “While the number of technocrats in government is on the rise, so, too, is the number of populist politicians who wear their lack of expertise like a badge of honour.”

His anti-populist bias pops out again with the statements: “But there’s been a price for not listening to the experts. Countries run by populist leaders of various shades – particularly the U.S., Brazil and the U.K. – have recorded among the highest COVID-19 death rates.”.

Nevertheless, after exposing the failures and fallacies of Technocracy, Basen concludes that “it would be wrong to dismiss” it. This is a very clever journalistic style that plants the seeds of propaganda deep into the unsuspecting reader’s mind. ⁃ TN Editor

On Oct. 13, 1940, a Regina chiropractor named Joshua Haldeman appeared in city court to face two charges under the Defence of Canada Act.

His alleged offence was belonging to Technocracy Incorporated, an organization that had been banned by the Canadian government several months earlier as part of a larger sweep of groups it considered subversive to the war effort.

Technocracy Incorporated was not a political movement – in fact, politicians or members of political parties were not allowed to join. It was founded in New York City in 1933 as an educational and research organization promoting a radical restructuring of political, social and economic life in Canada and the United States, with science as its central operating principle.

There would be no politicians, business people, money or income inequality. Those were all features of what Technocracy called the “price system,” and it would have to go.

There would be no countries called Canada or the United States, either – just one giant continental land mass called the Technate, a techno-utopia run by engineers and other “experts” in their fields. In the Technate, everyone would be well-housed and fed. All material needs would be taken care of, whether you had a job or not.

Joshua Haldeman was a leader of Technocracy Incorporated in Canada from 1936 to 1941, but eventually became disillusioned with both the organization and the country, and packed up his young family to start life anew in South Africa.

In June 1971, Haldeman’s daughter Maeve gave birth to his first grandson. His name is Elon Musk.

Musk’s estimated net worth today is more than $150 billion US. He’s clearly done very well inside the price system his grandfather would have railed against. But Musk has not completely abandoned his Technocracy roots.

Musk doesn’t talk about a Technate on Earth, but he has invested billions developing rockets to send people to Mars, with the intent to colonize it. He wants to see a city of a million people there by 2050.

Most of Technocracy Incorporated’s ideas for the Technate were neither practical nor achievable. But they raised at least two important questions that we’re still grappling with today: How should governments respond when large numbers of people lose their jobs to automation – and how can representative democracy, with all its obvious imperfections, function effectively in a world where science and technology play an ever more dominant role?

In a speech to an American audience in 1963, Howard Scott, the founder and leader of Technocracy Incorporated, declared that “as far as Technocracy’s ideas are concerned, we’re so far left that we make communism look bourgeois.”

That may not have been the most effective recruiting slogan at the height of the Cold War, but Scott wasn’t entirely wrong.

Technocracy was far from the only protest movement to emerge from the economic collapse of the 1930s. Social Credit in Alberta and the Co-operative Commonwealth Federation in Saskatchewan, the forerunner of the NDP, also attracted a lot of support. Some groups across the political spectrum had ties to European political movements. Some had charismatic leaders, like Huey Long and Father Charles Coughlin in the United States.

But Technocracy was a uniquely North American movement that may have been the most radical of them all. And in the depths of the Great Depression, hundreds of thousands of Canadians and Americans were prepared to embrace it.

Technocracy’s ideology defies easy characterization. It was anti-capitalist and anti-democratic, but not fascist. It was anti-government, but not libertarian. It believed in a radical form of social and economic equality, but it was not Marxist.

It rejected all those ideologies because none of them accepted the idea that science and technology were transforming North American life, and that only highly trained engineers and experts were capable of building a “new” North America.

While other political parties and protest groups were touting plans for putting people back to work, Technocracy response was: don’t even bother. The world had changed, and the jobs destroyed by machines were not coming back.

Before the Industrial Revolution, most manufacturing was done by hand, and there were never enough goods to go around; it was an economy based on scarcity. Now, machines could produce more than enough of everything for everybody with significantly less human labour.

But this industrial system capable of producing abundance was being stymied by the price system, a pre-industrial, scarcity-based construct ill-suited to a world where machines were replacing humans in the workplace.

At the heart of the price system was money. It was what forced people to go into debt, break the law, become greedy and engage in all kinds of other bad behaviours. But help was on the way.

“The march of technology, with its increasing abundance, will destroy every value of the price system,” Scott declared in a speech in Sylvan Lake, Alta., during a western Canadian speaking tour in September 1939. “It is a clash between obsolescence and modernity, between technology and value, between science and chaos.”

If this all sounds familiar, it’s because doomsday scenarios about massive unemployment and social unrest caused by technological change have been around since at least the Industrial Revolution.

In the 1770s, when the use of the spinning jenny became widespread, many weavers who had been spinning cloth by hand from their homes lost their jobs. But the spinning jenny made it cheaper to produce cloth, which meant more people could afford to buy clothes, which meant many more of them were needed to work in the factories where the cloth was now being produced.

This has been the story of technological change up to now: The jobs that machines have taken they have invariably given back in even greater numbers. The price system has proven to be much more resilient and adaptable than doomsayers like Howard Scott had imagined.

But today, as robots and artificial intelligence make ever deeper inroads into our offices and factories, the doomsayers are back, predicting a tsunami of unemployment that will crash into workplaces like banks and law offices, which until now have largely resisted automation. They fear this time, the story will in fact be different.

According to a 2019 report by the U.K. research group Oxford Economics, around 1.7 million jobs have already been lost to robots globally since 2000. Even the people who have helped engineer the tsunami are worried.

“We are experiencing the greatest economic and technological shift in human history,” declared Silicon Valley entrepreneur Andrew Yang during his unlikely run for the Democratic presidential nomination in 2020. “We need a way to help millions of Americans transition through this period.”

Yang’s solution was a $1,000 US-a-month universal basic income. It’s an idea that has gained considerable traction among Silicon Valley engineers and entrepreneurs in recent years – even among those who are usually opposed to any kind of expansion of government.

At the World Government Summit in Dubai in 2017, Elon Musk ― who constantly wages war with agencies trying to regulate his cars and rockets, and whose plan for fully autonomous vehicles could cost millions of jobs ― expressed his support for a guaranteed basic income.

“Mass unemployment” will be a “massive social challenge,” Musk warned. Echoing words that his grandfather likely uttered many times, Musk concluded, “There will be fewer and fewer jobs that a robot cannot do better. With automation will come abundance.”

For Technocracy, schemes like a universal basic income simply postpone the inevitable day of reckoning for the price system.

“You can’t fumble along with the system and just patch up the symptoms,” explained Tom Mason in a recent phone interview from his home in Tampa Bay, Fla. Mason is 99 years old and has been involved with Technocracy since the 1940s.

“Politicians today don’t want to address the disease. They just want to treat the symptoms ― and you can only patch up the symptoms so far.”

“Not enough jobs. Too many people.” Not true. The mechanization could allow humans to focus on doing the tasks requiring social skills and creative thinking AI will probably always lack. Let robots do the mindless tasks. A 3d printer and robot or two in a garage like building throughout the countryside could replace the factory model. Machinery–even AI–is meant to be an extension of humanity. Not a replacement. Certain products could have their quality concentrated upon by artisans. Instead of factory or sweatshop clothing, the local seamstress could provide everyone with high quality, personally tailored clothing. Humans could concentrate more… Read more »

Technocrats mostly want less of a herd to manage on the planet at this point… they feel the current numbers are unsustainable and once a person sets their mind to that sort of thinking they’re not going to be operating with flourishing and care and concern for humans … I know .. I see this mentality in my university town.. these people are a deathcult .. its rather unimpressive stuff considering these are the ‘smart’ people in our society. Canadians love their nannystatism… esp. during this scamdemic. Someone left this link in the comments of my blog… see what you… Read more »

This comment was left at my blog by someone who stated they’d been banned from David Icke’s forum for sharing it – within 45 minutes of posting.. http://d.p.h.free.fr/covid19/docs/TRUTH_about_Covid-19_and_Covid-19_Vaccines.pdf

Undocumented and unsubstantiated. There is no way anyone is going to read an 86 page document like this and get anything substantive out of it.

The fact it was removed tells me everything though.. if it was just b.s. why not leave it there for people to look at .. the document contains patents and names names at the very least it is part of the record for discussion purposes.

You are welcome to analyze it but my time is already fully occupied with published and documentable works that are fully attributed to the author(s).