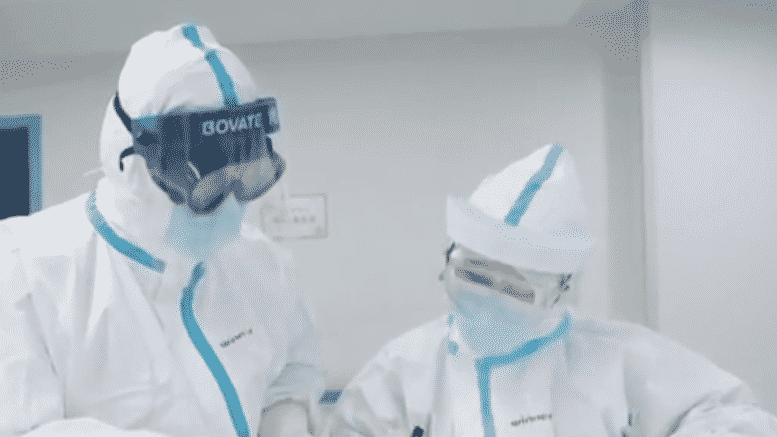 Please Share This Story!
PDF 📄
China is a Technocracy. With advances in genetic engineering, China wrote that particular races can be targeted with stealth bio-weapons to change body resistance to other pathogens. This is darkest side of Eugenics that the world has ever seen, and now it is going global.

As I recently wrote in Why Does China Collect Americans’ DNA,

As a Technocracy, China’s Technocrat scientists believe that the future of mankind lies in the engineering of its collective DNA. Nevertheless, China’s agressive collection of American DNA should be doubly-alarming because it can only spell one ultimate outcome: bio-warfare. That is, genetically engineering viruses or other diseases that will be selectively harmful to U.S. populations.

A new report alleges that China discussed how manmade viruses could be weaponized to target certain races.

The report comes from David Asher, who led the State Department’s investigation of the origins of COVID-19 before Joe Biden shut it down.

According to Asher, what China wrote in a declaration to The Seventh Review Conference of the Biological Weapons Convention at the United Nations office in Geneva “essentially laid out a road map of developments in biotechnology pertinent to the biological weapons convention that the Chinese indicated as particularly salient,” the Daily Wire reported.

“It wasn’t clear from their declaration whether this was for potential offensive use of synthetic biology and other techniques … but it certainly appears to lay out what they felt were going to be the drivers of a more potent offense in the future decade related to biotechnology,” Asher said. “This is probably the most disturbing thing to note that there could be a type of population-targeting or ethnic targeting using biology, according to the Chinese. That doesn’t mean they did it in the case of Covid-19 or anything else but it definitely implied that they were fully aware that this is feasible and possible.”

China has insisted that COVID-19 wasn’t created in a lab, and for over a year it was widely dismissed as a conspiracy theory, though in recent weeks that theory has regained traction as highly plausible.

Dr. Anthony Fauci publicly refuted the manmade virus theory for a year even though he was told in the early days of the pandemic that COVID-19 had “unusual features” that “potentially look engineered.” Some now believe that Fauci publicly dismissed the lab-leak theory to protect his own connections to funding “gain-of-function” research at the Wuhan Institute of Virology. We also know that the Wuhan Institute of Virology was conducting gain-of-function research and that it was partially funded by Fauci’s NIH.

The report is behind a paywall, but here are select excerpts from China’s submission to the biological weapons conventions, courtesy of The Daily Wire:

“Weaponized Viruses” Great – except virus don’t exist. But a nice try, hahaha… It’s time for the whole truth: “Dr. Stefan Lanka destroyed infection theory, virus theory, virology, epidemiology and the corona lie lately with one single video” – https://ogy.de/gfw3 (use translate option if necessary) “The core conspirators have no real power. It is an illusion that they are desperate to maintain. They invest billions in propaganda, hybrid warfare and security systems because they are terrified that we will realise what they are doing. Their plan can only succeed if we believe their lies and comply with their orders. If we don’t… Read more »

Israel has also done work on biological ethnicity specific weapons in the past. I don’t doubt other governments have, as well. It’s pure madness. The sociopaths have taken over the asylum.

Sorry. Is is a secret? I can’t understand why anyone would be shocked by the hostile intent of the CCP toward all other racial bodies. Japan knows it firsthand and they’re Asians. How could anyone be surprised by China’s creation of and historic lying about target specific genetic bioweapons. All developed countries have worked on them. Such meets the CCP intended goal of ruling the planet and ridding themselves of what Hillary Clinton in the US so callously labeled her political opponents, “deplorables” or what India’s cast system terms ‘untouchables’. The CCP see themselves as the Elois and the world… Read more »

[…] 2021-06-29 China Report: Weaponized Viruses Can Target Ethnic Cleansing    The report comes from David Asher, who led the State Department’s investigation of the origins of COVID-19 before Joe Biden shut it down.  China is a Technocracy. With advances in genetic engineering, China wrote that particular races can be targeted with stealth bio-weapons to change body resistance to other pathogens. This is darkest side of Eugenics that the world has ever seen, and now it is going global.https://www.technocracy.news/china-report-weaponized-viruses-can-target-ethnic-cleansing/ […]