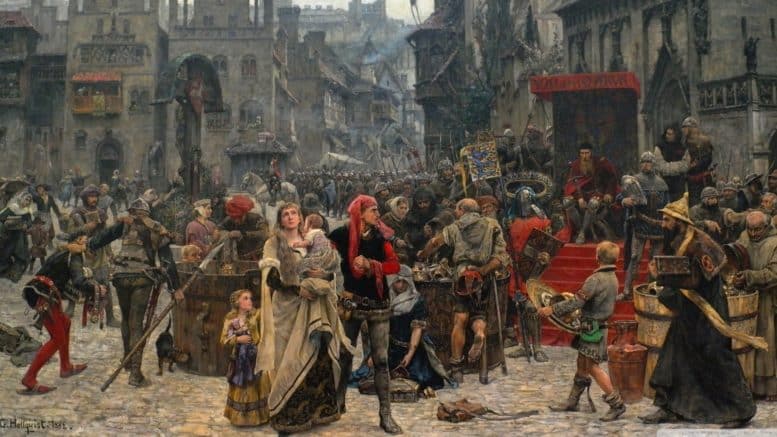 King Valdemar IV of Denmark conducting a fire taxation to the town of Visby in 1361. Painting by Carl Gustaf Hellqvist 1851-1890.

Without calling it Technocracy, the author correctly sees the future of “a shell democracy run by smart machines, and a new elite of progressive but authoritarian technocrats.” ⁃ TN Editor

Recent news exposés about the dark side of high-tech — including online fraud, social media manipulation of elections, and the use of cyber-surveillance tools to target human-rights activists — have shocked many of us out of our sanguine view that technology is entirely a force for good. Here in Israel, a recent chilling report in Ha’aretz on the cyber-surveillance industry revealed that some of the country’s best and brightest, young graduates of the prestigious 8200 IDF intelligence unit, have helped officials in authoritarian countries target homosexuals and dissidents through hacking and digital surveillance.

The Times of Israel asked Jamie Bartlett, Director of the Centre for the Analysis of Social Media for Demos think tank, and one of the world’s foremost experts on societal change caused by digital technology, how to account for increasingly dark phenomena associated with high-tech and why technological progress and authoritarianism appear to be marching forward in lockstep.

In his 2018 book, “The People vs. Tech, how the Internet is Killing Democracy,” Bartlett argues that digital technology may in fact be incompatible with democracy.

“In the coming few years either tech will destroy democracy and the social order as we know it, or politics will stamp its authority over the digital world,” he writes, in the introduction to his book. “It is becoming increasingly clear that technology is currently winning this battle, crushing a diminished and enfeebled opponent.”

In the book, Bartlett describes six pillars that make democracy work and how he believes technology is undermining all of them. The first pillar is active, independent-minded citizens, which is undermined by the advertising model of the Internet, which collects huge amounts of data about us and keeps us addicted to our devices. The second problem is the divisive tribal politics online that undermine a shared democratic culture. Free and fair elections, equality, competitive economies, and sovereignty are all also being undermined by technological trends, he writes.

Bartlett spoke to The Times of Israel from his home in London to explain why this is so.

The Times of Israel: It seems as though your thinking has evolved in the past year. In the past, you’ve said things like, “On the one hand there are some dangers in technology but on the other hand we shouldn’t become Luddites.” But this book strikes a much more alarmed tone.

Jamie Bartlett: Yes, I’d say I still don’t think we should smash all the machines up or anything like that. But I think it’s fair to say that I have become more pessimistic in the last year.

What triggered your pessimism?

It’s been a combination of stories that just keep coming out. It’s like a relentless bombardment. First, it’s automation and the middle class, then it’s declining media revenue, then it’s Russian interference in elections, then it’s hate crimes, then it’s Cambridge Analytica. It’s story after story, and after a certain amount of time you begin to think — are these just isolated stories or is there actually something bigger going on?

I did a TV series a while back for the BBC called “Secrets of Silicon Valley.” I interviewed a bunch of technologists in Silicon Valley and they would often talk in the same way, they would say things like, “We have dramatic technological changes coming. No doubt about it. But you know what, we’ve had them before, like the Industrial Revolution, and we were better off afterwards.”

But if in the long run if it all works out, maybe technological disruption is worthwhile?

Well, in the long run, we’re all dead aren’t we? Yes, in a hundred years’ time, possibly things are going to be so much better, and we’ll be healthier and live longer. But if you look at the hundred years after the invention of the printing press, yes, we’re all much better off today, but not before millions of people were killed. I just think that there can be great suffering in the short-term even if in the long-term it is good. We still should try and worry about the short-term.

Do you think that’s where we could be going, entering a new dark age?

I think there is a possibility that from the mid-1950s onwards, we just happened to live through a period of almost unprecedented stability, wealth formation, economic growth, and individual rights for certain groups in Western liberal democracies.

I’m not certain that what we will return to is a rerun of the 1930s, or a return to fascism and Communism — because they may have been products of their time. I’m sure the threats to democracy now will be new and a specific reflection of our technology. This is why I say I’m kind of worried about techno-dystopian authoritarianism — a shell democracy run by smart machines, and a new elite of progressive but authoritarian technocrats.

People often ask which of the British dystopian author was most prescient, George Orwell or Aldous Huxley. Orwell described a very violent surveillance state and Huxley’s world was gentle.

“We’re all drugged. We’re all relaxed. No one is thinking. Everyone is just having a good time — but we’re also not really free and we totally prefer security and safety and ease to any sort of meaningful freedoms.”