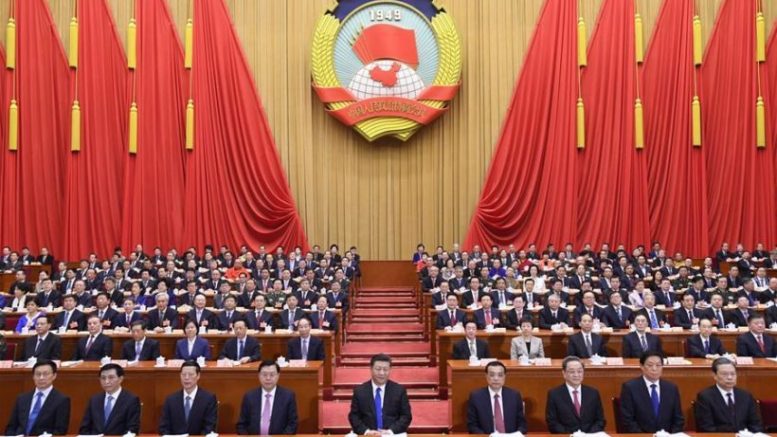 This written from within China, and states what I have been claiming for several years now. Zbigniew Brzezinski brought China into the economic mainstream in 1978 and wrote that communism was a natural stepping-stone to achieve what he termed the “Technetronic Era”, which was basically Technocracy. China is, in fact, a Technocracy and if the world wants to contain China’s ambitions, they had better wake up to this fact. ⁃ TN Editor

Why do Chinese political leaders have engineering degrees whereas their American counterparts have law degrees?

Great question, and one that gets at the heart of the political cultures of these two countries. It happens that I did my graduate work — including an abortive dissertation that never got beyond a rambling proposal — on the rise of technocracy in post-Mao China.

That China is heavily technocratic is well established: See the work of Li Cheng (Cheng Li) and Lynn White (1990), “Elite Transformation and Modern Change in Mainland China and Taiwan: Empirical Data and the Theory of Technocracy,” and other studies by Cheng, which demonstrate the rather astonishing extent to which the Chinese political elite is dominated by technocrats. The authors looked at mayors and Party secretaries of cities of over a million (of which there are today some 165); governors and provincial Party secretaries of China’s provinces, autonomous regions, and province-level municipalities; and Central Committee members, and found that by the time of writing, there were already more than 80 percent technocrats (that is, putative or actual office holders with four-year degrees or more in the natural sciences or engineering). Just look at recent Politburo Standing Committee membership: In the last two Standing Committees, I believe that all but one were all engineers. [Editor’s note: The reverse is true with the current Standing Committee, with only Xi Jinping 习近平 and Wang Yang 汪洋 having engineering degrees.]

This was deliberate policy, quite consciously borrowed from Singapore (and to a lesser extent, South Korea, Malaysia, and even Taiwan) beginning in the very early 1980s as part of a “Neo-Authoritarian” or “Soft Authoritarian” developmental model that many Chinese political elites believed was to be credited for the rapid rise of the Asian Tigers. Deng Xiaoping sought to replace the “Reds” — i.e., people in power whose positions derived from ideological purity or good (worker-class, peasant-class) backgrounds — with the “Experts” — often, Soviet-trained scientists and engineers who had enjoyed a brief ascendancy during the period of Mao’s eclipse from 1961 to 1965. He purged the Party of Reds and actually laid out quotas, calling for X percent of college-educated cadres by such-and-such a date. During the 1980s, many Chinese intellectuals embraced the technocratic idea, including many scientists and social scientists who would, by the decade’s end, emerge as very prominent critics of the Chinese Communist Party, like the dissident astrophysicist Fang Lizhi 方励之, one of the “black hands” whom the Party vilified as puppet master of the 1989 student-led protests. More typical perhaps was the late Qian Xuesen 钱学森, an MIT-educated rocket scientist, who returned to his native China to head the Chinese rocketry program. An avid supporter of technocracy, Qian even said that he believed governments should be run essentially like an engineering department. The notion that economic, social, and even fundamentally political problems could be approached with an engineer’s problem-solving mentality seemed somehow to resonate in China, and was largely unchallenged.

I’m greatly oversimplifying here, but I believe that in a country like China, where the notion that a knowledge elite should run the show is deeply ingrained, technocracy was somehow a natural fit with the political culture. Mengzi (Mencius, the most famous of Confucius’s followers) once said, “Let those who labor with their heads rule those who labor with their hands.” But it goes back earlier than the 4th–3rd century B.C.E., when he lived: In China’s first well-attested historical dynasty, the Shang, a shamanic priesthood, whose power was built on oracular divination and communing with ancestor spirits, held power, and technology such as it was — bronze casting, scapulamancy, and plastromancy — was dominated by that priestly caste. In imperial times, from roughly 60 years into the Han (206 B.C.E. to C.E. 220) through the Qing’s collapse in the early 20th century, a class of scholar-officials, whose elite status was predicated on the “truths” contained in the Confucian canon and certified by passing a series of civil service exams, ruled China, with, of course, some not insignificant interruptions.

With the end of the exam system and the repudiation of Confucianism by the intelligentsia of the early 20th century, there was an effort to supplant the “truths” of the old order with new, scientific (perhaps more accurately, scientistic) truths. Part of this explains the embrace of the “scientific” theories of Marxist dialectical materialism that made Communism popular. Even the paroxysms of Mao’s Cultural Revolution — the spasmodic violence, the complete upheaval and turbulence — only attest to how deeply rooted this political privilege accorded to knowledge elites has been in the Chinese political culture.