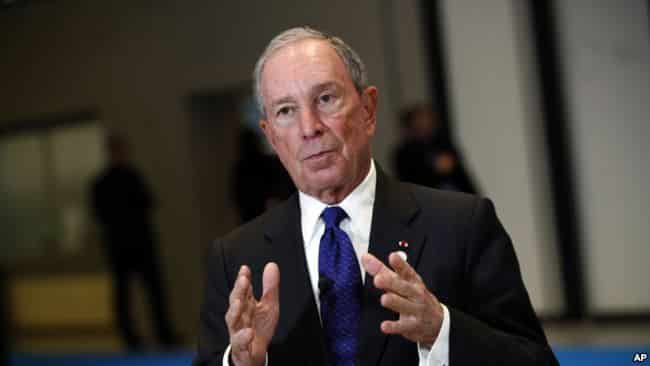 Please Share This Story!
PDF 📄
This is a hugely important appointment and illustrates the tight relationship between the Trilateral Commission, the United Nations, Global Warming and Sustainable Development. Bloomberg is one of the richest men in the world, worth $50.3 in 2018. It is a must to read my book, Technocracy Rising: The Trojan Horse of Global Transformation to see how this all fits together, but it does and it is undeniable. ⁃ TN Editor

The U.N.’s new envoy for climate action, former New York Mayor Michael Bloomberg, said Monday that President Donald Trump can become “a great leader” if he changes his mind about global warming and keeps the United States in the Paris climate agreement.

The billionaire media mogul expressed hope that Trump will listen to his advisers, look at the data on climate change, and support the 2015 Paris accord aimed at reducing greenhouse gas emissions.

Bloomberg spoke during a ceremony at which U.N. Secretary-General Antonio Guterres gave him the new title of U.N. special envoy for climate action, handing him the job of spurring international action to help curb global warming.

A longtime activist for clean energy and a green economy, Bloomberg was appointed U.N. special envoy on cities and climate change by then U.N. chief Ban Ki-moon in January 2014. Since then, he has been traveling around the United States and the world campaigning for a reduction in carbon emissions.

Guterres announced that Bloomberg will help support a U.N. Climate Summit that he is planning at U.N. headquarters in 2019 to mobilize more ambitious action and start implementing the Paris climate agreement now.

Countries agreed in the Paris accord to limit global warming to 2 degrees Celsius (3.6 degrees Fahrenheit) and do their best to keep it below 1.5 degrees Celsius (2.7 degrees Fahrenheit), compared with pre-industrial times. But the agreement starts after 2020 — and at U.N. climate talks in November over 170 countries stressed the importance of implementing ambitious climate actions before 2020.

Trump announced last June that he was withdrawing the U.S. from the Paris agreement, fulfilling a campaign pledge to quit the world’s chief effort to slow planetary warming.

He framed his decision as “a reassertion of America’s sovereignty” and argued that the agreement had disadvantaged the U.S. “to the exclusive benefit of other countries,” leaving American businesses and taxpayers to absorb the cost.

Under terms of the agreement, the U.S. cannot officially pull out until 2020.

Bloomberg has urged world leaders not to follow Trump, and has pledged to save the Paris agreement.

Bloomberg said Monday that his foundation is interested “in spending a lot of money in helping us understand that climate change is real and it’s measurable.”

He said the solution is for people everywhere to get together and change the way they live, “and we have to be a little smarter about how we generate energy.”

Guterres said last July that Bloomberg is convinced the United States will reach the Paris goals — despite Trump’s decision to abandon the Paris agreement.

Bloomberg expressed hope that Trump will change his mind.

“And if that’s the case, that shows a great leader who when facts change, and they recognize something different, they’re not bound to what they did before, they’re willing to change,” Bloomberg said. “And I think it’s fair to say this president does change his views — generally it’s one day to the next, but over a longer period of time.”

He said temperatures in the atmosphere and at sea level are rising faster than expected, glaciers are receding more quickly, and the Arctic ice cap is “shrinking much more quickly and dramatically than in the past — so climate change is running faster than we are.”

But the U.N. chief said there are two pieces of “very good news,” the secretary-general said: “Today, the cheapest energy is green energy” and the “green economy” is the economy of the future. And there is “enormous capacity” to mobilize civil society, the business community and cities.

Guterres pointed to the work Bloomberg has done in all those areas, saying: “I am very confident that this battle will be won, because the realities of today’s economy are such that the wise decision is the green decision.”