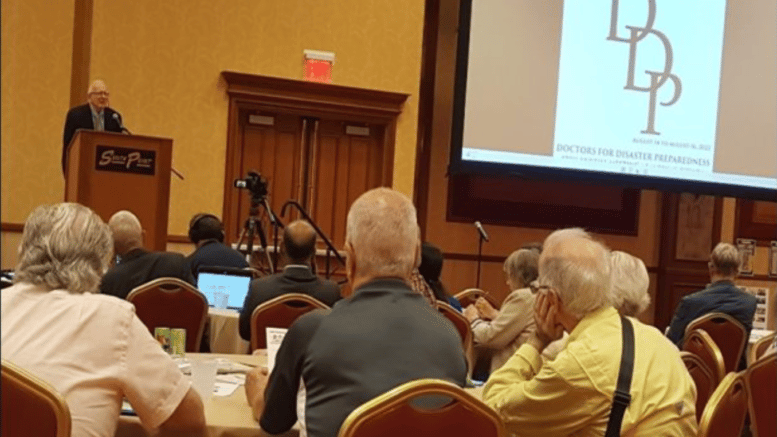 Please Share This Story!
PDF 📄
It was a privilege to address this DDP conference and more-so to see it reported around the world. Technocracy and Transhumanism are clear and present dangers to humanity, far transcending national politics and sideshows. These truths must be set free from the bondage of censorship.  ⁃ TN Editor

The 40th Annual Meeting of Doctors for Disaster Preparedness was held in Las Vegas, August 14 – 16, 2022 at the South Point Hotel, Casino & Spa. The “doctors” in this group include scientists, physicians, engineers, and experts in various fields.

Formed in 1982, Doctors for Disaster Preparedness (DDP) addresses various subjects. One is civil defense including do-it-yourself nuclear war survival skills. Another is space travel. Three astronauts have given talks at DDP meetings, including Scott Carpenter, one of the seven Mercury astronauts and the second American to orbit the Earth. Edward Teller, “father of the hydrogen bomb” and “father of nuclear defense,” attended DDP meetings and gave talks, including this one when he was 87 years old.

Topics addressed include radiation, especially the benefits of low-dose radiation; energy, evaluating fossil fuels, nuclear power, and renewable wind and solar energy; and climate science. Many world-class scientists and experts have given talks on climate science at DDP meetings. Six of the 17 talks this year address climate change.

DDP also addresses a variety of medical and historical topics, from saturated fats, statins, the linear no-threshold dose model of radiation, HIV/AIDS, and COVID-19 to State Power and Shakespeare, and the Kennedy assassinations. Four talks this year address medical matters—two on COVID; one on Photomodulation for treating pain, wounds, and brain injury; and one on ozone applications in medicine (and industry).

This is the list of talks given at DDP’s 40th Annual Meeting and the speakers’ bios.

Jane Orient, M.D., long-time President of Doctors for Disaster Preparedness opened its 40th Meeting with an 18-minute “Welcome” address that is well worth watching. She titled this year’s meeting, “Truth v. the ‘Narrative.’” She confronts the sad fact that “Now climate science, like much other science, is about getting the data to comport with the narrative.” She notes it used to be “the ‘Right Stuff’ meant heroism, strength, competence.” But today, “the Right Stuff everywhere is increasingly beginning to mean diversity, equity, and inclusion—and agreement with the narrative.” (Among her many accomplishments, Dr. Orient has been the Executive Director of the American Association of Physicians and Surgeons for more than 30 years.)

Willie Soon, Ph.D. gave the first talk at this 40th meeting, something he has done at every DDP meeting for the last 22 years. Dr. Soon is an independent solar physicist. Earlier this year he resigned his 25-year position as an astrophysicist at the Harvard-Smithsonian Center for Astrophysics. Now he runs, with two other leading scientists, The Center for Environmental Research and Earth Sciences (CERES), an independent, multi-disciplinary research group (ceres-science.com). The title of his talk to DDP this year is ”Failed Climate Predictions: Not Just Bad, but Anti-Science.”

Dr. Soon covers the litany of failed dire predictions that climate models make on climate change. He confirms that they are uniformly inaccurate. He shows evidence that atmospheric CO2 is not a heat source. It follows changes in atmospheric temperature, lagging behind such changes for six months to a year. Solar energy powers the Earth’s climate systems and weather. CO2 does not cause climate change. It is plant food. It makes the planet green.

Patrick Wood spoke in the afternoon. An economist by training, he has become a leading critic of Technocracy and is also becoming one with its roommate Transhumanism. Patrick has written three books on Technocracy, most recently Technocracy: The Hard Road to World Order, published in 2018. The title of his talk to the DDP is “Polycrisis of Doom: Technocracy’s Mother of All Wars to Conquer the World” (it replaces the title “Global Technocracy” in the Program).

Patrick sees that the real intention of Technocracy, “the science of social engineering,” is to destroy capitalism and abolish private property! Elite, nongovernmental experts will control the production and distribution of goods and services to the world’s population, under the guise of sustaining and protecting the climate. These people are confident they can master the scientific, technical, and engineering problems involved in doing this. The population of the world, including you and me, will be relegated to following their lead and wind up owning nothing.

Transhumanism complements this approach. It seeks to “enhance” the human condition (and possibly prolong it). The movement embraces genetic engineering, molecular nanotechnology, information technology, and artificial intelligence to accomplish this. Patrick Wood is writing a book titled The Evil Twins of Technocracy and Transhumanism, scheduled to be published later this year. (Patrick invites people to subscribe to this new book where in a serialized fashion one can read each chapter as they get written.)

Bonner Cohen, Ph.D. was first to speak the next day. He is a senior policy analyst with CFACT (Committee for a Constructive Tomorrow), with the National Center for Public Policy Research, and the Heartland Institute. He is author of The Green Wave: Environmentalism and Its Consequences. The title of his talk is “Power and Money: What’s Really Behind the Climate Agenda.”

Dr. Cohen gave a spellbinding presentation. No notes, no slides; and he did not once hesitate or need to glance down at the lectern. Instead, throughout his hour-long lecture Dr. Cohen kept his eyes fixed on his audience. The link above has it (the background music gets turned off two minutes into the lecture).

He makes clear that there is nothing altruistic about the Climate Agenda. Power and control is what is really behind the U.S., Europe’s, and the World Economic Forum’s Climate Agenda—power to enrich its proponents and exert control over people. Like the WEF’s futurist advisor, Israeli Yuval Harari, points out, there are just too many people in the world (“useless people”). So, measures must be taken to ensure that we reduce their numbers to save the planet, ones like depriving people of food and controlling energy to prevent heating one’s home.

Dr. Cohen calls human-caused global warming “a crackpot idea, a hoax that does not stand up to true scientific inquiry.” And “climate is changing as it always has changed. Indeed, the term climate change is redundant.”

The Earth’s climate has been changing for more than 4 billion years without humans.

He offers a ray of hope in all this, citing the recent Supreme Court ruling “West Virginia vs. the EPA.” It blocks laws made by the Environmental Protection Agency. This decision confirms that such laws are the purview of Congress, the legislative branch of government, not administrative agencies like the EPA. This ruling will have widespread ramifications on climate matters.

The luncheon speaker on the second day was Jay Lehr, Ph.D., a favorite with long-time attendees to these meetings and quite a character! A prolific author, he has 29 books in print. The title of his talk is “The Fraud of Electric Cars Charged by Wind and Solar.” You will enjoy watching and listening to him—unless you happen to own an electric car.

Dr. Lehr makes a strong case that todays electric cars will not supplant ones with gasoline-powered internal combustion engines. The 1,000 lb. lithium battery that provides electricity to power an electric car costs a minimum of $10,000 and lasts 5-6 years. The average age of gasoline-powered cars on the road in America today is 12 years. An electric car that age would be on its 3rd very heavy, very expensive, fire-prone battery.

He notes that electric vehicles (EV) pose a fire hazard, one which water can’t put out. Many garages now prohibit EVs from being parked in them, and auto makers are issuing “park outside” orders away from structures that could catch fire from a burning EV. A cargo ship carrying 4,000 luxury cars with a complement of high-end EVs sunk after the lithium battery in one of them started a fire that spread throughout the ship.

Dr. Lehr cites 20 good reasons why electric cars won’t last. EVs are really “fossil fuel-powered vehicles,” since coal or natural gas must be used to recharge their batteries. Wind and solar power can only produce a tiny amount of the trillions of kilowatt hours of electricity required to keep a nation-wide fleet of EVs running.

Other especially notable talks at this Meeting were “American Oil and Gas and the Global Energy Transition: a Forward View,” by Joseph Leimkuhler, a world-class expert on offshore deep-water drilling for oil and natural gas; “The Great Reset,” by Marc Morano, author of The Great Reset: Global Elites and the Permanent Lockdown; and “The Great Green Renewable Energy Hoax,” by Paul Driessen, J.D., author of Eco-Imperialism: Green Power, Black Death.

The saying “What Happens in Vegas, Stays in Vegas” cannot apply to the truths Doctors for Disaster Preparedness have brought to light there. These truths need to be widely disseminated.

Tesla Model S; the 85 kWh battery pack weighed 1,200 lb (540 kg). Most sources say you get 1,500 charges, then it goes to the dump… except there’s all kinds of non-environmentally friendly stuff in the batteries… not that Gavin Newsome would know that… see https://evannex.com/blogs/news/understanding-teslas-lithium-ion-batteries

“Nothing” on EMF radiation. Only this scant comment “, the linear no-threshold dose model of radiation”

Good piece.
Nothing beats diesel and high octane 98 lead gasoline which we have plenty of for the next 1000+ years.
Back to where we started and kick the environmental turncoats finally our in history’s garbage can.