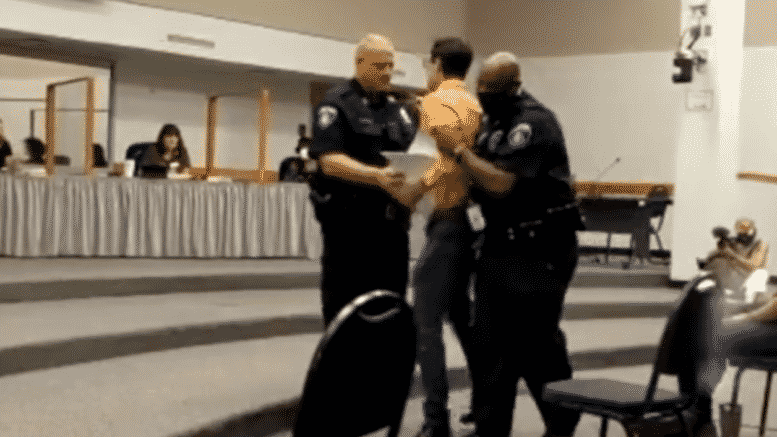 Please Share This Story!
PDF 📄
Parents all across America are discovering what kind of people have taken over their school boards while they were sleeping. As pressure is applied, threatened school board members are using every tool available to them in order to censor, suppress and destroy their critics. The conflict is far from over. ⁃ TN Editor

School boards have always attracted their share of controversies: disagreements over curriculum, bitter election fights, and personality clashes. But in recent months, as parents express their frustration over Covid lockdowns, mask mandates, and critical race theory, local school districts and federal law enforcement have upped the ante by monitoring parents, requesting undercover agents at school board meetings, and even arresting parents who attend board meetings to express dissent.

The latest and most egregious example comes from Round Rock, Texas. In a series of school board meetings this fall, two fathers—a minister named Jeremy Story and a retired Army captain named Dustin Clark—spoke out against alleged corruption and school officials’ hostility toward parents. Journalist Pedro Gonzalez reported that at an August meeting, Story had calmly “produced evidence that the board had covered up an alleged assault by the superintendent, Hafedh Azaiez, against a mistress.” The superintendent and school board president cut him off midsentence and ordered officers to remove him from the premises.

At the next meeting, in September, with the district’s controversial mask mandate on the agenda, the school board locked the majority of parents out of the room, preventing them from speaking. Clark and other frustrated parents asked the board to open the nearly empty room to the public. Instead, school board president Amy Weir directed officers to remove Clark from school property. As he was dragged out by two officers, Clark shouted to the audience: “It’s an open meeting! Shame on you. Communist! Communist! Let the public in!”

A few days later, the school district, in coordination with law enforcement, sent police officers to the homes of both men, arrested them, and put them in jail on charges of “disorderly conduct with intent to disrupt a meeting.” Families and supporters of Story and Clark held an all-night protest outside the jail, until the men were released the following morning. They are now raising funds for their legal defense.

The school board was able to do this because the Round Rock Independent School District has its own police force, with a three-layer chain of command, patrol units, school resource officers, a detective, and a K-9 unit. The department serves under the authority of the board and, through coordination with other agencies, apparently has the power to order the arrest of citizens in their homes. For many parents, the school board is sending a message: if you speak out against us, we will turn you into criminals. When reached for comment, the school district’s police department confirmed that it initiated the investigation and that “one board member requested details from the RRISD Police” prior to the criminal referral.

Round Rock is not the only school board to resort to repressive tactics to stifle dissent. In Loudoun County, Virginia, for example, where parents have protested against critical race theory and a sexual assault cover-up, the superintendent asked the county sheriff to deploy a SWAT team, riot control unit, and undercover agents to monitor parents at school board meetings. The sheriff refused, telling the superintendent that he had not provided “any justification for such a manpower intensive request,” but the mere attempt was astounding.

Even the FBI, under the direction of Attorney General Merrick Garland, has mobilized to monitor parents at school board meetings and, if necessary, prosecute them under domestic terrorism laws. The National School Boards Association, which had requested the federal intervention in a letter to the Justice Department, was later forced to apologize after state chapters strenuously objected to the tone and content of that letter. Yet the Biden administration has moved forward with the effort, creating a task force of federal agents and attorneys to coordinate against parent protesters.

The battle lines are clear: on one side, the Biden administration, public school bureaucrats, and their armed agents; on the other, parents and families who oppose school closures, mask mandates, critical race theory, and corruption. Public school officials have demonstrated a willingness to use police power to silence and intimidate their opponents. If parents are to succeed, protesters must continue to organize peacefully and highlight corruption and abuses of power by local school officials.

“This isn’t just about Dustin [Clark] and me,” said Story. “It is about everyone. If they can come for us and get away with it, school boards nationwide will be emboldened to come for you.” He is right—and parents must work together to stop it.

This is a GOOD thing! If this is what it takes to WAKE PEOPLE UP…….then, this all HAS to happen! At the start of the PsyOp PLANNEDemic, when kids were ‘home schooled’, so-called ‘parents’ finally realized ‘what’ their kids were being taught in SKOOLS (spelled on purpose). And a lot of them, who started to act like ACTUAL PARENTS, did NOT send their kids back to these indoctrination camps. Now we have the Zombie Public waking up to REALITY. Realizing what these EXPERIMENTAL BIO-WEAPON INJECTIONS are doing. (along with the NAZI behavior of politicians/bureaucrats all around the world). Next Phase…….is… Read more »

Go after their surety bond. This is THE way to get these guys. 3 or more claims and they are uninsurable and cannot hold any office. See this interview below with Steve who did exactly that from a newsletter I received. PARENTS and all concerned citizens TAKE NOTE. This is what we have been waiting for.    Listen to the entire interview. He brings up a lot of other points like how much money the federal government is giving to the school on a per kid basis to enforce these covid mandates and the one two punch that got them to capitulate. I… Read more »

These parents need to STOP complaining and lock tugging like a bunch of children. They MUST approach the problem through the monetary path. And, they must CHANGE THEIR LAWS en masse thereafter to support their wishes. Apparently, none of these parents understand how to do that. Can you say INSURANCE!!!!! All these people are public servants and must have surety bonds put in play by insurance companies, upon their election/hire. These are different from state to state but are governed by each state’s laws. The bonds are for millions. The insurance company must stand behind the elected public servant’s decisions… Read more »